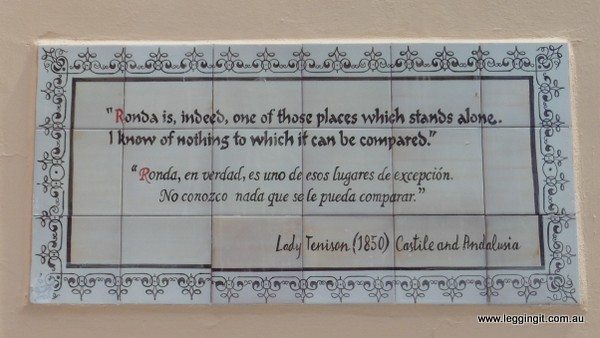 After returning to Spain we stayed a few days in Ronda. The ride up from Marbella is quite beautiful with views of the coast on the initial part, then lots of twisties though the hills. There’s some great stops with lookouts and a few spots where the road has been altered leaving little lay bys set amongst the forest which would be great for picnics. Some even have waterfalls. The road is well known by bikers and on the way up groups of Germans roared past us in a flash of leather and noise. We passed them at the next service station.

The town of Ronda is situated on sheer sandstone cliffs with a crystal clear river running through a gap in the chasm far below. It’s steeped in history dating back to Roman times and beyond, with evidence of its moorish and modern heritage. A beautiful old brick bridge spans the river which separates the town. Charming old whitewashed buildings and cobbled streets really add to the charm of the town. A walkway winds around the cliffs giving views of the valley far below which are quite stunning.

The centre of Ronda is a large pedestrian area with all the name brand stores and there are lots of nice little local cafe’s, restaurants, and Tapas Bars. It really is the perfect setting for lunch on a beautiful sunny day. Adding to the charm of Ronda are beautiful Andalusian horses pulling carriages, local musicians playing flamenco guitar, and window boxes overflowing with colourful floral sprays.

To explore some parts of Ronda on foot you really need to be part mountain goat because some of the old cobbled streets are almost vertical. I don’t know what it’d be like trying to negotiate them if they were wet or icy but after Ron almost landed on his behind I think they’d be treacherous.

We stayed at the youth hostel a short walk from the centre situated between a few supermarkets and within walking distance of a few local Tapas Bars. It was a perfect location. Whilst here we met up with another Perth local who has been travelling for a long time also. It was great to have someone from back home to chat to.