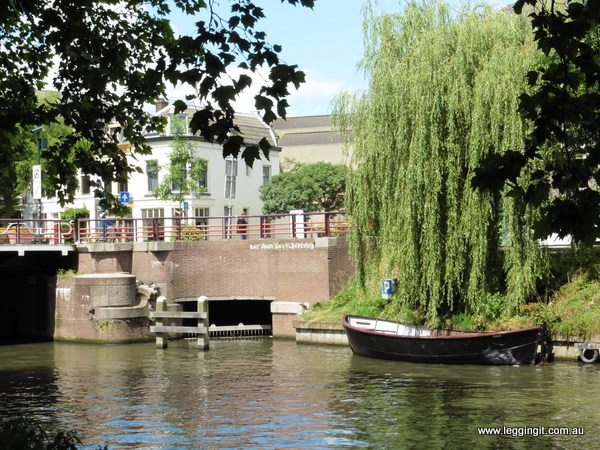 Today we visited Utrecht one of the canal cities quite popular with tourists. Much of the central area of Utrecht is pedestrian only so we parked up next to the Cathedral and headed for the Tourist Bureau across from it. At the Tourist Bureau were all sorts of traditional Dutch souvenirs with distinctly dutch symbols such as clogs, windmills, tulips, canals. We were able to pick up a map(for a fee) and a bit of info about Utrecht. 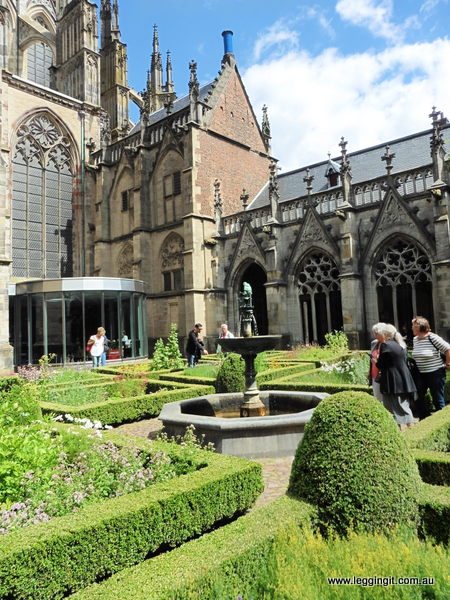 On the map was a walking tour taking in the highlights of Utrecht so we decided to follow it. Our first stop was the St Martins Cathedral which has an interesting history dating back to when it was just a simple chapel built around 630. It was only opened for a year before it was destroyed by Frisians during a raid. St Willibrord, a Northumbrian priest sent to christianise the Frisians.

He was made the first bishop of Utrecht in 695. A fascinating fact about St Willibrord is that he established an abbey in Echternach in Luxembourg. He is venerated as the patron saint of the city and every year on Whit Tuesday a dancing procession is held in his honour. It’s the only dancing procession in the whole of Europe. Two years ago we were able to visit Echternach and witness the procession and it was absolutely amazing. In the square in front of the Janskerkhof not far away is a statue of the saint. 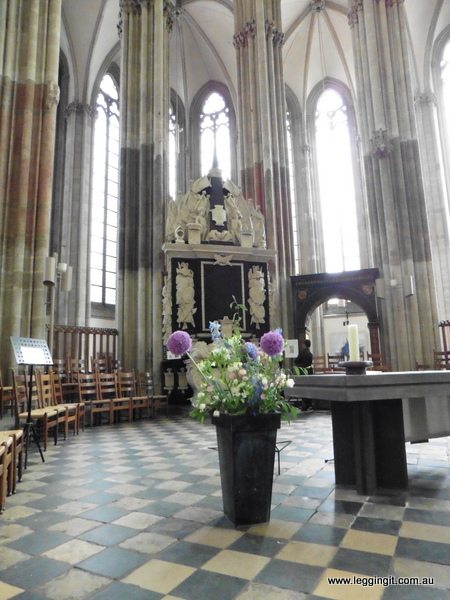 The chapel was rebuilt after the Frisian raid, but then destroyed by Normans in the 10th century. If it wasn’t bad enough with the church being destroyed by invaders but the church was also destroyed three or more times by fire. After the big fire of Utrecht in 1253 the current Cathedral was commenced. Construction of a massive cathedral continued through until the mid 1500’s with the lack of funds bringing construction to a halt. It was also around this time that the cathedrals statues both inside and outside the building were attacked and destroyed by Calvinists. It was part of the Protestant reformation movement which swept across Europe. They protested against the use of statues as they saw it as the worship of idols. It was at this time the cathedral became a Protestant church.
To add insult to injury in 1674 the nave which connected the bell tower to the rest of the church was destroyed by a tornado.
After the hurricane the cathedral planners simply gave up so the cathedral consists of just the transept, and choir which remain separated from the bell tower by the cathedral square. It’s hard to imagine exactly how big the cathedral was before the nave collapsed, but it must’ve been massive. There’s paving stones in the square which mark out the former nave.
Inside the cathedral it has a remarkable floor built from black marble tomb stones. We didn’t know where to tread as each step was on somebody’s grave. Over the altar the white marble baroque style altarpiece was quite stunning.
A cenotaph containing the heart of George van Egmont, a staunch anti Calvanist who was bishop of Utrecht from 1534 until 1559 is also a highlight of the cathedral. 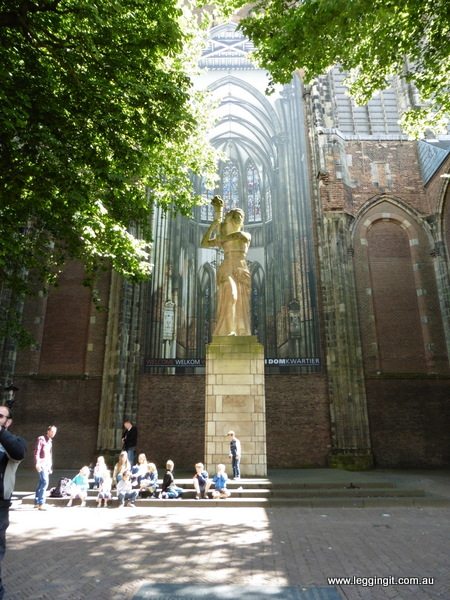 In front of the cathedral the Freedom statue of a female holding a flaming torch commemorates the liberation after World War Two.

Attached to the side of the church is the cloister with a lovely garden in the centre. It was the perfect place to escape the summer heat which we are experiencing at the moment. 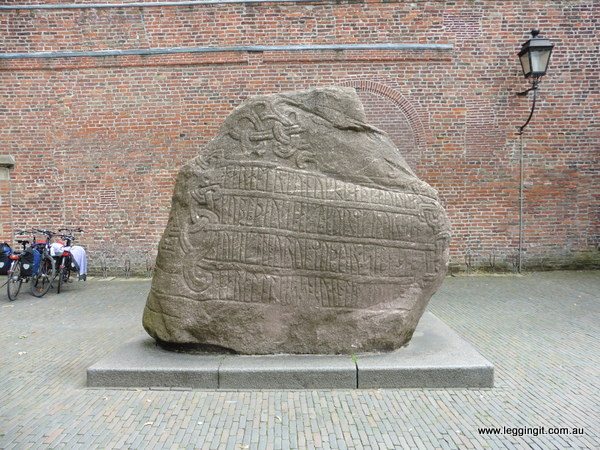 A most curious object between the Cathedral and the nearby university is the Viking Runic stone. This one is actually a copy of Harald Bluetooth’s stone from Jelling in Denmark dating from the 10th century. The copy was a gift to the university in 1936. We’ve actually seen the real one in Denmark on our trip north two years ago. The original was quite well preserved despite being exposed to the elements for hundreds of year. On the front Runic stone it was inscribed with large runes in lines. The back of the stone was decorated with loops a man and a dragon. When they were first built the stones were said to be painted however over the last 1000 years the weather has taken its toll. Harald Bluetooth raised the stone to his parents who were buried in two mounds either side of the stone. 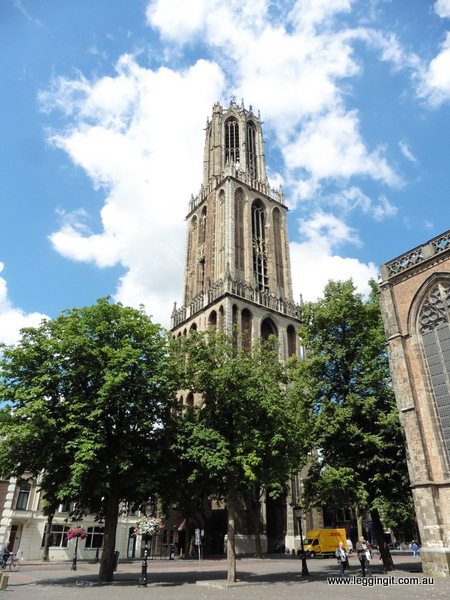 We wandered around the square past the University and through the city gate beneath the famous Utrecht bell tower. Towering over the cathedral square at 112 metres, it is the most easily recognisable symbol of the city. It was here that the city originated 2,000 years ago. People were lined up in all directions to get a picture of it and climb the 465 steps to the top. 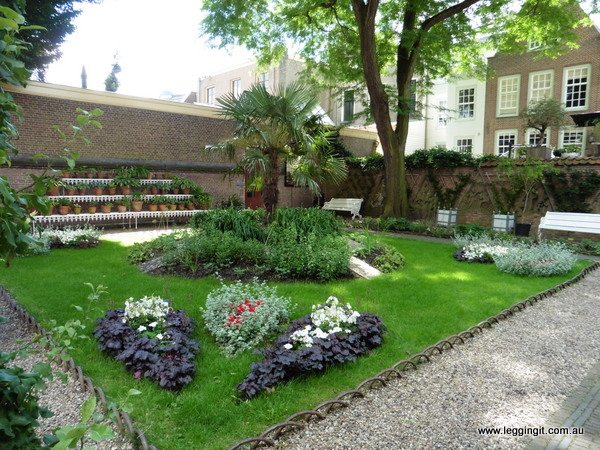 Beside the tower is the shipstern shaped facade of the Bishops palace and beside this Floras Garden (Hof). It’s a small hidden oasis in the inner city. On the grounds of an old medieval Episcopal palace, it was demolished in 1803 leaving a patch of land in the city centre. Previously used as a nursery it is now a ting garden for all to sit and enjoy. The perfect escape from the city streets and filled with lovely flowers for all to enjoy. 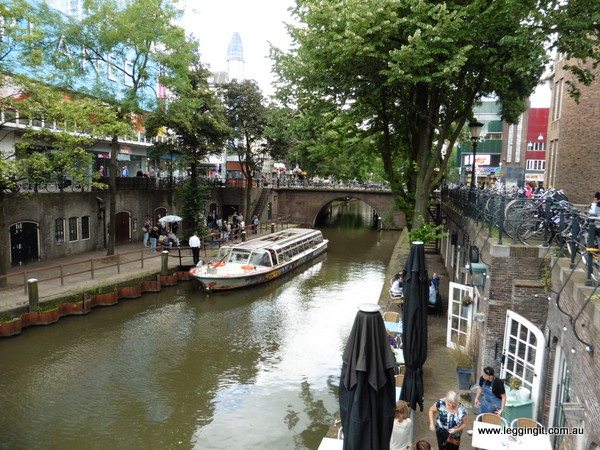 We wandered through the streets surrounding the canal checking out the various boutique shops and even discovered an Aboriginal museum selling Australian goods (made in china). They were even selling Tim Tams but at  Euro 3.50 *about $6) we decided against them

.
Following the tour along the canal it seemed like everyone had descended on Utrecht and it was slow going weaving through the crowds. Around the canals hire boats, canoes, pedal boats and working boats slowly cruised along.

Not far from the City Hall we spotted Hollands first department store. Opened in 1839 Winkel van Sinkel it was a place where you could buy almost anything. At the front of the buildings are the famous ” English fallen women” or “English whores”. That was the nicknames given to the four cast iron ladies which adorn the facade. The story goes that the statues which were cast in England were so heavy that they had to be transported by water. When they were being lifted into position the crane broke and hence they became “fallen women”.
Along the canal were different buildings of differing styles a mixture of old and new with many of the old buildings former mansions of rich merchants. It really was a lovely walk along the cobbled streets overlooking the canal. The city is broken up into sections or quarters and we headed through the student quarter. It was quite a vibrant area with lots of student accommodation, shops, bars and cafe’s. 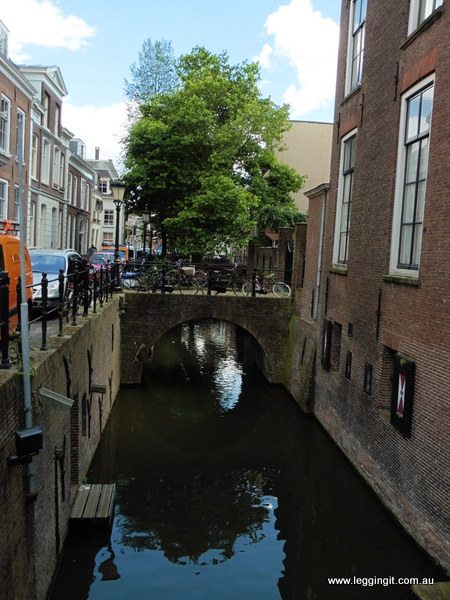 A lovely cafe bakery by the Kromme Nieuwegracht canal surrounded by beautiful old buildings was the perfect place for lunch. It was along this part of the canal where every house had a bridge to their front door.

Eventually we wound our way back to the cathedral, to the bike and headed home. Utrecht really is a lovely place to visit on a sunny day. Tomorrow we head to Alkmar to check it out.