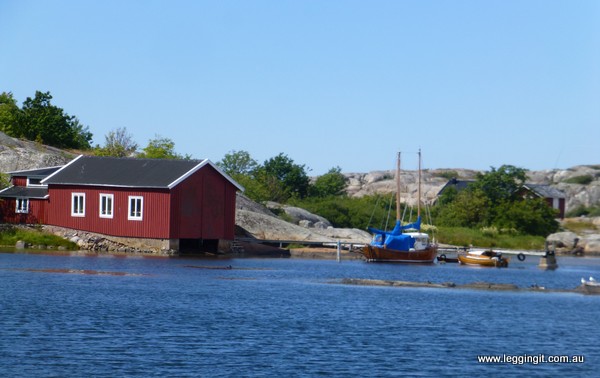 After sharing breakfast with our hosts we said our goodbyes and headed towards the ferry.

The weather was fairly good as we boarded the ferry at Helsingor in Denmark bound for Helsingborg in Sweden. As it was only a short crossing there was no need to strap the bike down so we just parked up with a number of other bikes making the same crossing.

Arriving in Sweden we travelled as close to the coast as possible, taking a few detours along the way to check out little seaside villages. After taking lots of back roads checking out the countryside we has to get back on the main road and put some miles on. The one interesting thing we noticed was all the striped warning signs for sharp corners, barriers etc were blue and yellow instead of the traditional red and white. It made us wonder whether the Swedes were so paranoid about the Danes that they paint things in their own national colours. Just a thought.

Goteburg is one of the major cities of Sweden with lots of shipping and of course a ferry port. Riding into the city the next day, we were stuck in torrential rain, which just flooded our wet weather gear. By the time we arrived at the Ferry booking office we were both feeling like drowned rats. The Stena ferry from Goteburg to Fredrikshaven in Denmark is not cheap, costing about $100 but as we wanted to slip across for the Skagen Music Festival it’s the price we had to pay. The ferry facilities are pretty nice with a large modern restaurant where we warmed up with coffee and cake before checking out the city.

Our host gave us a hint that the local ferries have a hop on hop off service with tickets lasting 90 minutes and about 1/1oth of the price of a tour. Best of all, the ferry stops at all the same stops as the tour boats. There were a few interesting modern buildings around waterfront especially the university. Mostly the new buildings looked like something out of an Ikea catalogue and the waterfront looked like a working harbour with large ferries dotting either shore, a container terminal at one end, a navy base with camouflaged ships. We stopped at an overpriced marina to enjoy a coffee each and a prawn sandwich between us and said goodbye to thirty dollars, whoa.

The day heated up so we took a ride out to Hjuvik near the city where we took the free ferry the short distance, not even bothering to get off the bike. The three islands Hönō, Ökerö, and Heden are connected by bridges and ferries depart from them to other little islands which dot the area surrounding Gotenburg. It was a nice ride just cruising around checking out the red painted sheds trimmed with white along the waters edge and the old church built from local stone which glistens in the sun. Swedes were all out lying in the sun trying to catch a tan.

The sun was beautiful on the ride home and we spent a relaxing night with our couchsurfing host who gave us some great tips and stories of Sweden.

Tomorrow we are off to Skagen.