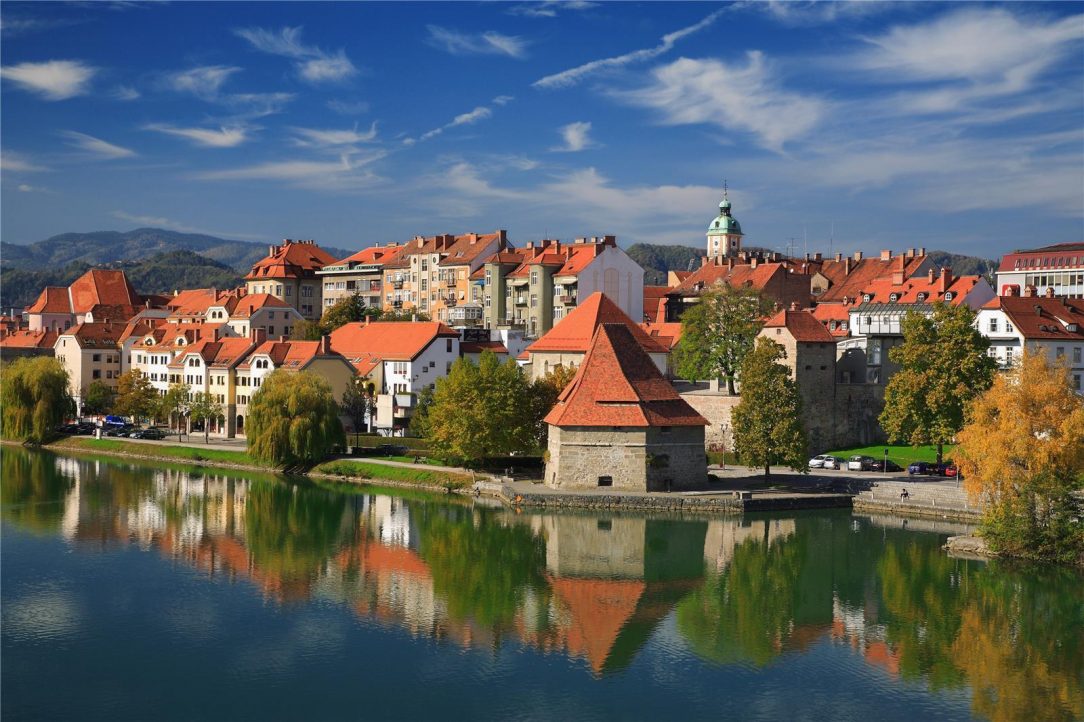 Today instead of the straight run from to Ljubiljana we are going to explore some of North East Slovenia, We had been told about a castle in the area so made that the focus of our journey, We skipped breakfast at the hotel as the prices of course were outrageous. Instead we settled on a coffee at a local cafe with a roll from the bakery, sitting in the beautiful morning sun. 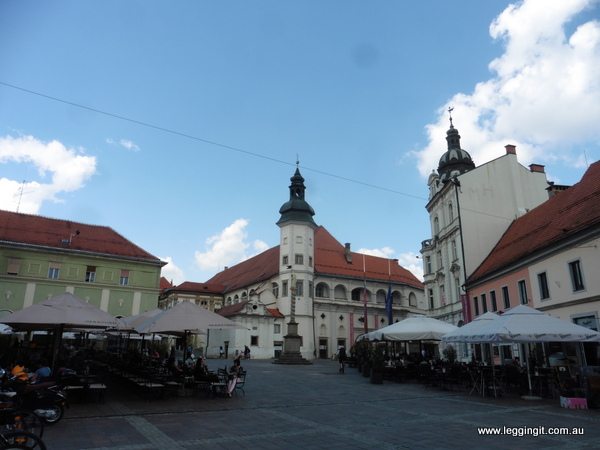 Heading out of Maribor we were sort of glad to see the back of it. Maribor is just one city which never really grew on us. Once out of town however we were soon amongfields of young corn, wheat, barley, canola and the occasional field of hops we felt much better.

The ride took us up through the North-East of Slovenia and along the Austrian border. We even crossed over the Austrian border at one stage. It took us quite by surprise as one minute we were riding through the edge of town following the river and next thing we were riding over a bridge into Austria. We didn’t stay in Austria too long only about five kilometres until the road wound back into Slovenia. It was interesting to see that the Austrian border protection had set up a temporary border post in a sea container. Heading up into the North-East of Slovenia the countryside was filled with vineyards then became quite hilly. The tops of the hills were covered with forests so the area is quite popular with hikers, bikers and picnickers. The forests have a network of trails running through them which are really popular at this time of year.It was quite nice riding through the forests and also through little villages that had a bit of an Austrian flare.

Eventually we arrived at the Grad Goricko Schloss,  Supposedly the largest Castle in Slovenia which reportedly has 365 rooms.. The latest update dates back to the 17th century and is in fairly good condition despite its remoteness. It also has a lot of grounds to explore but as our time was limited we had a quick look and headed off again.

Maybe not early enough, as we headed back towards Maribor the sky changed from beautiful sunny skies to grey and overcast. At the first hint of rain we stopped and put on our wet weather gear. It was just in time too because the rain started just as we got back on the bike.

With about thirty kilometres left to reach Ljubljana, the skies really opened up in a deluge which could be only described as tropical. Within minutes huge sheets of water were laying on the roads making it quite dangerous. With roads flooding, thunder, lightning and even a little hail we found a bridge to take shelter under. With a bag of our favourite Croatian mints and some water we watched as cars and trucks ploughed through the water near the bridge.

By this stage about six inches of water was laying on the road. Cars and trucks didn’t slow down however and huge showers of water shot out from under the vehicles covering the traffic approaching. More than once the windscreen of an oncoming car was swamped by the muddy brown water from underneath a truck.
After about an hour the rain eased so we got back on the road and headed to the apartment. By the time we arrived the owner had left but his neighbours invited us in for a drink. In the meantime they tried to contact the owner but to no avail.

Eventually as it was getting late we gave up and headed towards the city in search of a hotel. The rain returned which made it harder to see the signs in front of hotels. After an hour of either hotels being full or too expensive for our budget. We finaly found a hostel in the centre of the city, it was pretty rough but it was great to get out of the rain.

Soon the room was filled with our bike gear drying on clotheslines strung between the windows.

After a shower we headed to a traditional restaurant in the centre of the city. It was a nice way to finish the day and warm up. Tomorrow we’ll pick up the keys to the apartment and after settling in check out the city.