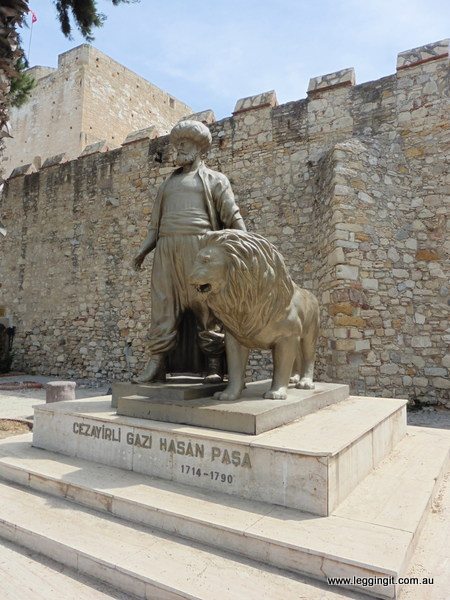 After a brief visit to Çesme yesterday today we decided to explore the city a little further. Çesme has some lovely Ottoman style buildings around the streets which surround the public square. Many more old buildings can be found by just wandering through the streets up towards the hill. 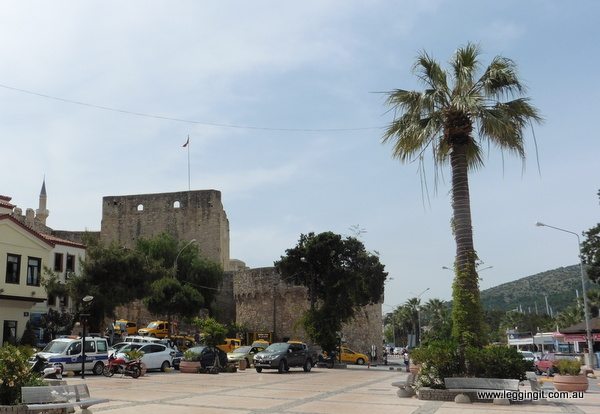 In the centre of Çesme sits Çesme Castle, a well maintained rectangular fortress which once sat on the harbours edge but these days after successful land reclamation sits well away for the water. Michele decided that visiting the castle didn’t sound like fun so opted for a coffee and a book instead whilst I explored it. The castle was well preserved with a museum of sorts in some of the rooms. A few rooms host a gallery of Çesme’s involvement in the Russo Turkish War of 1768-1774. The Battle of Chesma of 1770 took place not far from the castle in Çesme Bay with the Russian Fleet destroying the Turkish fleet by using fire ships. The exhibit had biographies of all the main characters involved and some memorabilia. In other rooms of the castle were a collection of coins used in the region and pottery. there was also a room with various stone work including gravestones dating back to roman times.

I took a wander around the castle to check out the view from the towers. There was not very much else to see so after walking he walls I decided to catch up with Michele. The price of entry into Çesme Castle was 8 TL and based on the exhibits I think was a little steep. 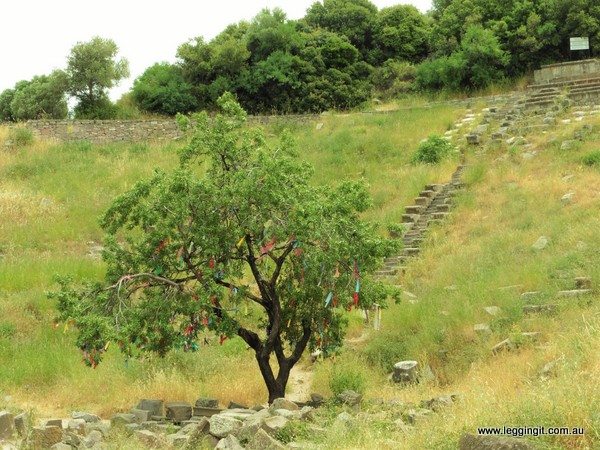 As the day was still early we decided to head to Erythrae Greco-Roman ruins near Idiri. The ride out to Idiri follows the coast passing through little villages and towns with great views across the bay to small islands. Arriving at Idiri we rode along the cobbled streets up the hill through the village and parked near the ruins of a temple. Erythrae was settled by Cretans around 3,000 years ago and a city with a nearby port developed. The city was a part of the Pan-Ionian league and had a long history with allegiances to the Athenians, Mausolus, Alexander the Great, Pergamum, Roman and Byzantine Empire.

These days there’s not much left, and we can attest to that just the base of a few temples, the ruins of a theatre, a remains of a Byzantine Church and a few towers. 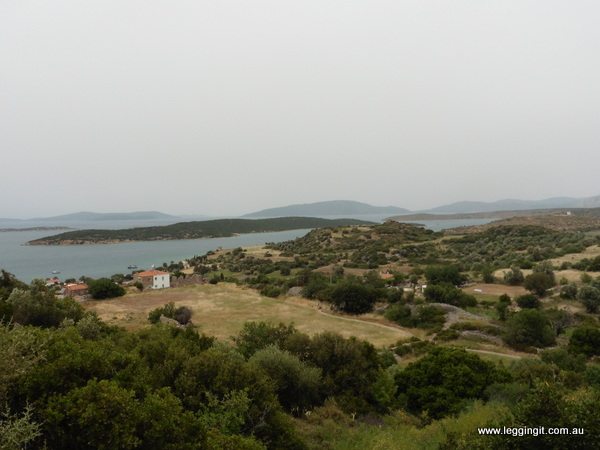 After parking the bike Michele headed off and as I was still packing the gear away followed a few minutes later. As soon as I stepped through the entry gate next to the ruins of a temple I almost stepped on a snake. It took me by surprise as we’ve been walking through ruins all over the place without even thinking about “bities”. It lazily slithered into a crack in the rocks leaving about 6 inches of its tail hanging out. Further along the path only about 10 metres away another snake lay basking in the sun. How Michele walked past them without noticing them I don’t know. As soon as I walked towards it, it began to move towards me. It’s only chance of escape was up into a gap in the stone wall so I wasn’t going to stop it or get in its way. Both snakes were Antalyan vipers, about 4 foot long and quite docile. Around the ruins the grass was all waist high so perfect for mice and their predator snakes. After seeing these two I was definitely sticking to the path and watching where I was stepping. Eventually I caught up with Michele to tell her what I’d seen and she was quite surprised. She’d found some interesting lilies and was tramping around the grass trying go get photos. 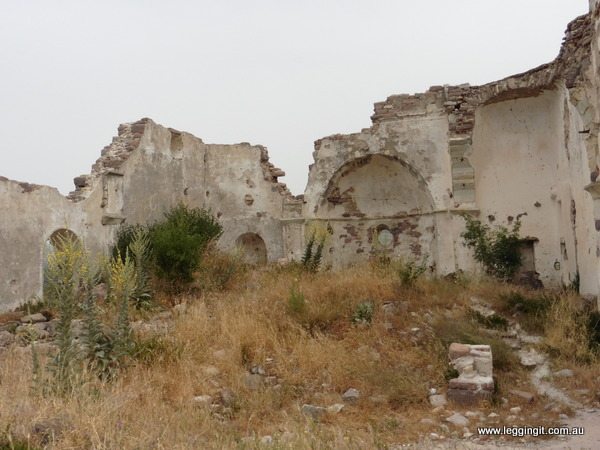 We found the theatre and I climbed up to the top of the hill to the Temple of Athena and a Byzantine Church which lay in ruins. It was a great view across the bay and the islands beyond. Wandering around the ruins I found another snake which was my cue to get back on the bike and leave this snake infested area to them.
On the trip back to Çesme we rode along the beach front areas where we experienced Turkish parking. Along the beachfront the council had bolted plastic posts to stop people from parking. Instead of deterring them, they simply parked on top of the posts. Hmmmm. 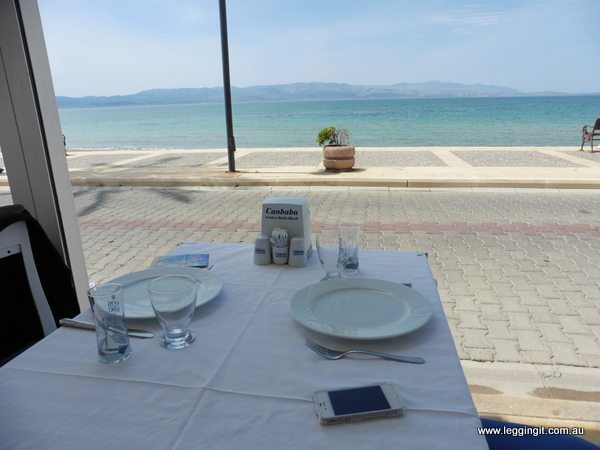 Arriving back in Ciftlik we decided to have lunch at one of the many seafood restaurants along the beachfront. We were worried that it was going to be expensive but it wasn’t too bad. A meze plate, some calamari, a little salad, a little yeni raki, it was the perfect way to spend the afternoon.