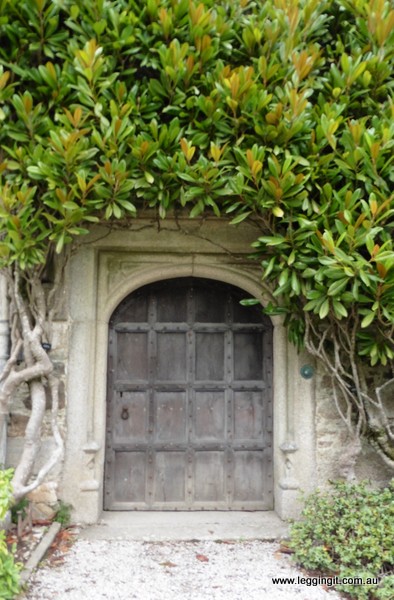 The hostel was pretty quiet this morning at breakfast compared to last night. There was a family in with eight kids under 11 and its amazing how much noise they generate. The other family staying here only had two kids so were quiet as church mice. Oh the silence was golden, must be getting old. We chatted for a while to the other family and the chef who were all really nice people. They told us about Cornwall and things to see and do.

It didn’t take long to pack the bike and soon we were on our way, passing through Penzance (singing the pirate song). With the map on the tank bag we followed the A 394 along the coast to Helston before we turned onto the A 3083 and followed it all the way out to Lizard, and on to the point. We walked down the steps and were greeted with a magnificent scene of cliff tops and crashing wave.

Lizard claims to be the most southerly point of Britain and in 1907 was the scene of the RNLI’s biggest ever rescue. The Suevic ran aground in fog with 382 passengers, 141 crew and two stowaways. The crew lowered the ships boats and with the 4 lifeboats called out from the neighbouring stations and in treacherous conditions all lives were saved. The stories of heroism of the lifeboat crews and the women winching the boats back to safety were incredible. As for the Suevic, its stern was cut off and towed to Southampton. New bows were made in Belfast and for a while it was nicknamed the “longest ship in the world” with its bows in Ireland and its stern in England. 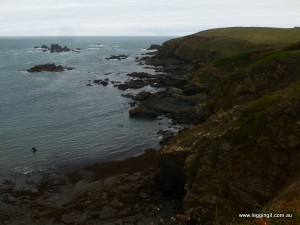 Our next stop was Falmouth but not before getting lost and travelling around in circles and ending up at Poldark Mine. It’s another former mine, which has lots of machinery, underground tours however it was closed. If we get back this way we might check this one out.

At Falmouth we parked at the beach and enjoyed a ham and salad baguette broccoli and Cornish blue cheese soup. The views of the sea were stunning with grey clouds overhead, silver tones of the ocean, and ship drifting with the tide a painters dream. 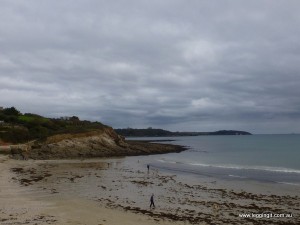 Back on the bike heading toward Seaton, we passed Lanhydrock Estate and decided as we had plenty of time we should pop in. It is set on 900 acres, with lots of woodlands, gardens, walks and is the former home of theAgar- Robartes family. The house was destroyed in 1881 but rebuilt in grey granite to its former design, but with modern improvements and decorated with the finest Victorian styling inside.
The family were said to be kind employers who provided medical care for their servants and families if they fell ill. They established a clothing club to assist their servants afford new clothes. In an effort to improve their standard of living they provided free logs, a can of milk per day, presents on birthdays, annual treats such as picnics at Newquay and trips to the theatre. They also referred to their servants as staff. For this the “staff” had to work from 6 in the morning up until midnight, with one afternoon off per week.

The family were not scared of flashing their wealth with two long halls, one divided up into a withdrawing room, sitting room. The other with a highly stylised ceiling depicting scenes from the Old Testament, and lined with paintings which was used for skittles, cricket and other activities. With all those glass windows I can hear a voice calling out “if you hit any windows, you’re grounded”.

Because of the size of the building there are beautiful long hallways with lots of beautiful wood panelling. The rooms are decorated using bold colours and animal activists would have a fit with the amount of tiger skins lining the floors but it reflects a different time. There were also stories of the masters and servants who breathed life into this place and it was interesting reading all about them.
.
In the kitchens and larders we had a glimpse of day to day life of the humble servant with utensils and foods laid out ready to be prepared for the table. Looking through the house was if the owners had just stepped out and would be back soon. Not at all like a stuffy museum at all.

The house was gifted to the National Trust in 1953 by the 7th Viscount and is popular with locals who either want to wander through the extensive gardens, grounds or house. There’s also a massive play area and cafe near the car-park to let the kids run off a bit of energy.

After our visit it was a short ride through a few one lane tracks, back onto the A38 past Liskeard, then cut across to Hessenford, (a quaint little town) and down to Seaton. After a few rides up and down the street and asking locals we finally found the address where for the next week we’ll be house sitting and servants to Percival P Pants esq while his parents are in Bulgaria.

One thought on “Legging it to Lizard”