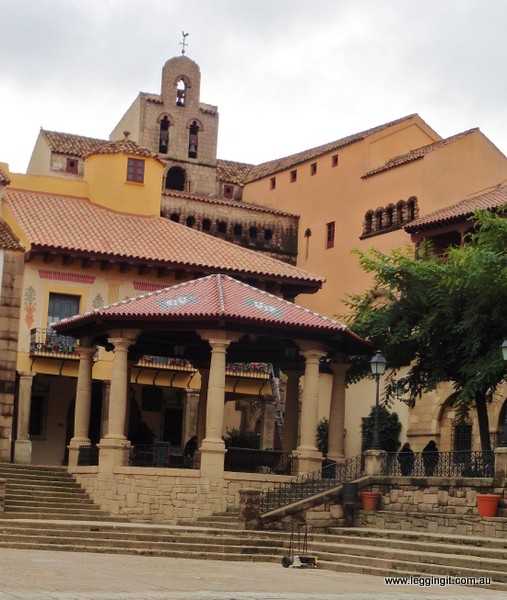 If you are heading to Barcelona and will not get the chance to visit other parts of Spain, Poble Espanyol is the perfect place to visit to feel like you have really visited all the regions.

The Poble Espanyol (Spanish Village) was constructed for the Barcelona International Exposition in 1929 and is a village which represents all the different areas of Spain. It’s pretty easy to get to with the hop on hop off tourist bus, local buses 13, 23 or 150, metro to Espanya station and connecting bus or just simply walk. Alternatively if you drive there’s a car park near the entry. We caught the metro as it was a beautiful day and enjoyed the 15 minute walk.

Just inside the gates we approached the guide booth for an audio guide which was awesome. The audio-guide is a touch screen tablet, which is really easy to use with an audio-guide or video guide narrative which corresponds with numbers throughout the village. There’s audio-guide gives lots of information on each section as it guides you through the village. The video guide alternatively is a chauffeur Santiago, who takes you on a tour through each region of the country, with funny stories and other little gems. 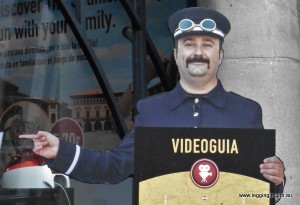 Each of Spain’s regions are represented with different architecture representing specific buildings squares and streets which can be found in that region. The audio and video guide explain the reasoning and history behind the architecture. The buildings are home to lots of different craft shops and restaurants. Some of the prices are high however there are lots of high quality items which can be purchased at a very reasonable price. The restaurants and cafe’s were much the same, with quality meals at prices to suit all budgets. It was really nice taking a break at one of the cafe’s overlooking the village square.

The village is also home to an art museum which has free entry. Inside are displayed lots of ceramics and a few drawings by Picasso, a few pieces by Dali and lots of art from various Spanish artists covering many genres of styles. There’s a healthy array of sculptures in various mediums and a section of glass art, which is something we normally don’t see at art collections.

We spent half a day exploring the village and being off season it was great avoiding the crowds to take it all in at a leisurely pace.

Entry is 12 Euros however across from the Espanya metro is a booth where you can purchase tickets at a discounted price. The audio/video guide is 4 euros but well worth getting.

After the Poble Espanyol we caught up with Lyn and Carl, two other Aussies currently travelling the world on two motorbikes, who we met two days ago. We enjoyed hanging
out the other day so we thought we’d catch up and hang out some more.

Espanya Metro station is near the Barcelona Bull Fighting Arena which these days is a shopping centre with restaurants on the roof. These restaurants have a view over the city so we took the elevator up and had lunch up there. For an expensive restaurant the meal was pretty industrial, Ron and Lyn had seafood paella that left Ron with a ” is that it?” expression. He said hopefully by the time he leaves Spain he will find a decent paella with flavour (the missing ingredient). Carl ordered the lunch special hamburger mushroom sauce and fries. The bottom half of the roll arrived with a meat patty, mushroom sauce and some fries. Not very aesthetically pleasing u any stretch of the imagination.

After lunch we took a stroll up the avenue past all the lovely fountains past the art gallery and around the Olympic area. The weather closed in and light rain began to fall so we headed towards the cable car (which was hugely expensive) before heading back towards the city centre.

It was just on dark as we wound our way through some of the dodgy looking areas we were warned about before finding the safety of La Rambla. After a drink and a chat just off La Rambla we found a little place where we enjoyed a traditional Aussie meal, a late night lamb sandwich (the kebab). A word of warning always read the small print ( ie.the price of the wine) We had a great meal, the service was outstanding but the small bottles of red wine which only held two glasses were €11 each. Good thing we were sitting down when the bill arrived, because a tasty inexpensive meal got really expensive when the drinks were added.
It was a nice day out however, and catching up with Lyn and Carl really topped it off. Soon their lift arrived and we said our goodbyes, hopefully we’ll catch up again somewhere on the road.

Tomorrow we head south to Peniscola.

2 thoughts on “The Enchanting Poble Espanyol”