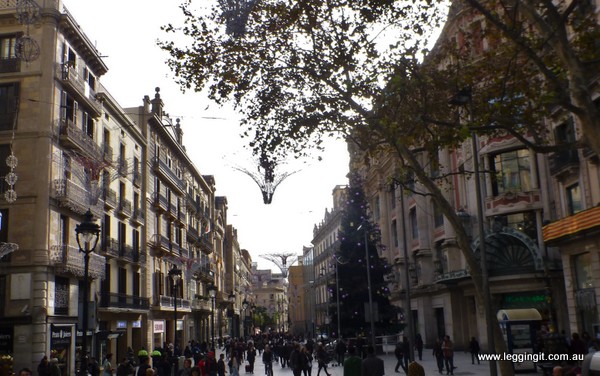 Today we started the day with, you guessed it a visit to the bread shop for fresh bread and a local sweet pastry for Ron. Eating out can get a bit expensive after a while but breakfast of fresh bread, vegemite, cheese, cold meats, fruit, yoghurt from the supermarket, is a great way to start the day and save a few dinara.

The weather was pretty good so we skipped the train and walked into the city. Barcelona is a great place to walk around with lots of nice tree lined avenues and wide boulevards.

Using the guidebook we took ourselves on a self guided tour of the baras, starting at Placa Nova, near the Barcelona Cathedral. Placa Nova was a hive of activity as it was filled with Christmas markets. There were lots of traditional gifts that are sold everywhere however there were a few items which caught our eye. A piece of log with a Xmas hat, a face and legs called Tion had us intrigued. They were everywhere. Another fascinating item on sale were porcelain figurines. There were all sorts including political leaders like Obama, Ghandi, sports stars like Messi and Beckham, doctors, nurses, lumberjacks. What was curious about them. They were all squatting doing number twos. What the?

We just had to find the answer so we approached a girl setting up a massive Tio de Natal . She explained to us the Catalan tradition of going up into the mountains to get a log (Tion) or going to the shop whichever is closer. The Tion has a blanket on one end and kids hit the Tion with sticks, just like a piñata. Toys miraculously appear under the blanket. It seems like the pooing fetish carried over from Tion to the ceramics.

The Barcelona Cathedral was an interesting visit with lots of beautiful chapels to different saints. Each chapel filled with ornately carved figures and wooden panelling reaching high to the ceiling.

Not far from the Cathedral is the Casa de l’Ardaica an old fountain in a courtyard, and at the rear of the Cathedral the museum. As it was close to lunch we could only visit the cathedral garden which had been converted into a huge nativity scene complete with animals before we were ushered out.

Around the Jaume metro station area the old roman walls still stand which is a credit to the builders all those years ago.

As it was close to lunch we hurried on to Txikiteo Taberna where we had arranged to meet up with Lyn and Carl, two Aussies who are also travelling around on two motorbikes. It was really cool meeting up and speaking our own language to someone new. We were still talking when they shut the place at five o’clock. The night was pretty mild so we took a stroll up La Rambla checking out the different people performing and also checking out the markets. The markets have lots of fruit, veg, flowers but the most amazing thing was ham €189 per kilo. Who would pay that? The pigs are raised solely on acorns. The meat is quite dark but who would pay that money?

After a decent wander around the city we finished off with a pizza before we said goodnight and went our separate ways. As it was just as far to the station to home we just walked. Believe it or not it’s pretty safe to walk the streets at night.

Tomorrow we’re off on a Gaudi tour and hopefully a visit to Sagreda Familia, one of his most famous works.