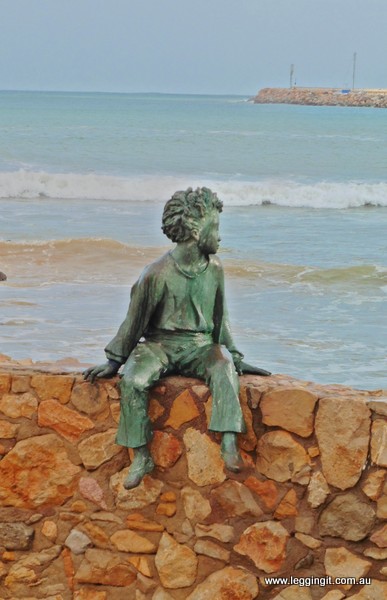 The weather was overcast and rain had been predicted but we decided to leave the bike at the hotel, walk into L’Escala and explore. It was amazing passing through street after street with all the houses and apartment blocks all shuttered up for the winter. The biggest crowd was the dozen surfboard riders sitting out in the water on their boards waiting for waves at the main beach. It was an interesting spot where the surfers can just park their cars, walk across the road and just jump in the water behind the break. Very civilised, no paddling out just jump in and off you go. We watched a bit of the action, which including two stand up paddle boarders there was quite a bit of talent. 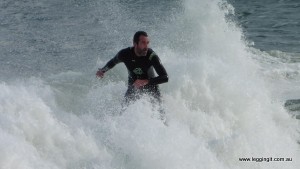 The tide was quite high and all along the coast waves were crashing against the cliffs sending sheets of water high into the air and onto the coastal path. All around the coastline there were lovely art installations. Even one of the car parks was flooded by the tide with a lone moped just out of reach of the water.

It was quite nice enjoying a Tapas of prawns, calamari, and local anchovies whilst sitting overlooking the bay as the waves crashed on the beach.

As we were walking around the coastal walk a freak wave crashed at our feet causing us to jump to safety on a seat to avoid getting our shoes wet. However we were too slow.

The walk home took us past the old community clothes washing bath. It was about 8 metres long by about 3 metres wide. It was just a concrete structure with the inner wall sloping back to allow the clothes to be scrubbed on the sides of the walls. Pretty hard work judging by the old pictures but they also show the local women enjoying themselves as part of a community as they went about their daily chore.

Also along the back road we passed the L’Escala anchovy factory, one of the things the town is famous for. Judging by the anchovies we ate at lunch they were really good, and not very salty.

As we reached the hotel the heavens opened up and we stayed inside for the rest of the day playing cards, only venturing out to pop into the supermarket. Ron even made a friend of a little stray cat as he was cooking tea. There’s lots of them around the area who survive as best they can by scavenging or befriending soft touches like Ron.

Tomorrow we head to Barcelona. It’ll be sad to leave L’Escala, for even though we’ve just chilled out for the past two days the place is a gem in winter.