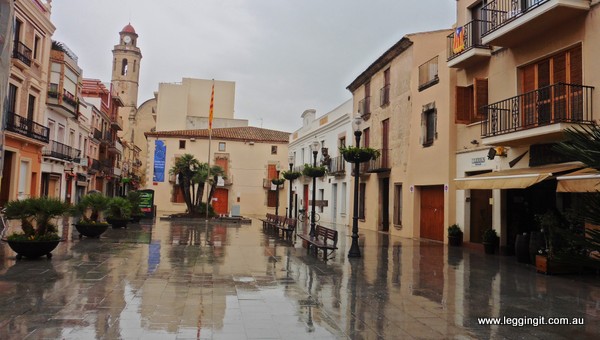 Ron’s little friend was waiting patiently at the door this morning as he made breakfast, so he gave her the last of our ham. There’s lots of stray cats around the town and this one makes her way from room to room at the hotel until, she finds someone who’ll feed her.

Todays forecast was 20-30 millilitres of rain 80 percent chance. By the time we climbed on the bike light rain had just started to fall. Heading out of town the clouds got darker and darker. The countryside was pretty nice with fallow fields soaking up the rains, acres of fruit trees and occasional villages.

Suddenly we were hit by a torrential down pour which had us seeking shelter under a road bridge until it eased. Although we had wet weather gear on, the rain just flooded it. Pretty soon wet weather gear became WET weather gear. Ron suggested once the rain eased to head to the closest village and wait it out. Just up the road we parked up at a small cafe, which was overflowing with locals drinking, eating and chatting. The cafe was much like the French cafe’s where locals congregate and have a glass of wine or a coffee. It’s unlike our cafe’s which would have a fit with someone bending the elbow before the suns over the yardarm.

Once the rain cleared we made a run for it and enjoyed a run over the hills with a few tunnels along the way. The road led down to the coast and looking out the sea looked pretty rough. Eventually we stopped at Calella where we had lunch at a place with a menu much like Melbourne’s Chat n Chew (or as we used to call it “The Chew and Spew”) The food wasn’t Michelin quality, but it was pretty good and we got a bit of Spanish practice in.

The rain returned so we ordered churros, hot chocolate and coffee. We waited and waited eventually the rain eased off but as we left it returned even heavier so we sheltered in a doorway until it passed. We made it back to the bike and headed into Barcelona arriving at the hostel. The owner directed us to another address down the road where we are staying for five nights at €20 per night. Cheap and cheerful for the next few days 🙂