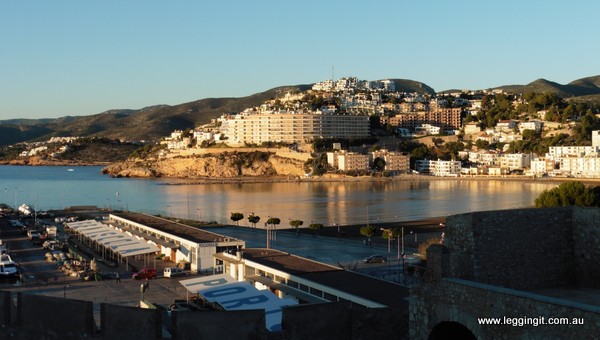 It took forever to get out of Barcelona this morning. as it was time to leave to head to Peniscola for the night.

I was hoping to get one last look at Sagrada Familia but Chrissie  the Satnav had other ideas. The rain settled in as we passed over the hills surrounding Barcelona and the temperature just kept dropping. Boy was it cold I could hardly feel my fingers and Ron kept trying to get the circulation in his going by slapping them on his thigh.

The countryside was mainly thin rocky clay soil covered with vineyards with small villages on the high ground. The rain just dogged us all the way, but we didn’t have any choice but tuck our chins in and clock some km’s up. By the time we reached Vila-Seca it was time for a break.

After riding around the industrial estate we finally found civilisation including an American Hamburger bar called the Shambala. It was so cool with 50’s music playing on the jukebox, old ads playing on the TV’s and the restaurant all decked out with green and white striped upholstered seats, black and white tiled floors,  pink and grey wall tiles, and rock and roll style pictures on the walls. As we were sooooo cold we skipped the burger menu and ordered off the lunch special menu. Hot soup to warm up with, lasagne with layers of bolognese sauce chopped beef, chopped ham, spinach and bacon.  It was great to have a different style of lasagne which tasted so good. About this stage our hands were just starting to thaw out just in time for a local style dessert. A slice of fresh pineapple with the centre chopped up and covered in a creme brûlée with toffee on top. Very sweet and tasty.

The rain returned when we returned to the bike and headed south following the coast. The sea was nice and green, but unfortunate that it was so cold.

As we headed over the hills and came down the coast leading towards Benicarlo seeing all the abandoned hotels and resorts was really saddening. Some had closed probably due to a big cement plant opening up quite near but others obviously had been hit by the economic downturn

The landscape changed a little with lots of terraced fields of olive trees. The local farmers have kept their heights to about 3 metres maximum by pruning and training them to grow down wards. As we got closer to Valencia we were greeted by fields of oranges and lower temperatures ooh it was cold, but good for oranges.

Riding into Peniscola was like lots of other seaside cities and towns with shutters down on most of the units. Another ghost town.

The satnav went flat as we arrived and tried to find the address. We rode down to the seaside and up into the castle. What a nightmare the cobbled streets were slippery and steep. It was impossible to find the hotel. As we twisted down through the castle gate the bike slipped on the cobbles and as Ron tried to correct it, the bike kept going and the next thing we were down. I laid there for a while to collect my thoughts as a local guy came running to help. The Princess hit the gate as it went over and cracked the front fairing and twisted the screen. It was not a pretty sight. Ron got her back up, running, straightened what he could before we found a cafe and regrouped. It took me ages to stop shaking but after a coffee I got back on the bike.

We rode around trying to find the street but it was impossible the Tourist Info’s were closed, the maps and free wifi were useless. Eventually I went into a cafe to ask for help. What a great place the owner was so nice ringing to find where the hostel was located before escorting me down the street to point it out. Yes it was up in the castle just near where we came off the bike.

When we arrived at the hotel we couldn’t believe it, why they didn’t have a street sign. We rang the intercom and knocked on the door for 15 minutes no answer…… Shit… Now what? Six o’clock at night and no sign of life, what sort of hotel is

Ron suggested we return to the nice cafe, have something to eat and use their Internet and get another room. The owner greeted us and after we told him of our situation rang the hotel. The owner’s son pulled the old “they knocked on the wrong door” excuse and turned up at the cafe about ten minutes later. By this stage we had ordered something to eat so our new friend told him to come back when we’d finished our tapas. After our meal our mate called the hotel and pretty soon we were being driven to the hotel, which this time had lights on. Sure enough we arrived back at the door we’d been knocking on and the intercom we’d been buzzing. Eventually the door opened a few minutes later and we were ushered to the room, where we were promptly asked for payment (not too slow about that).

As I warmed up with a shower Ron returned to get the bike and parked the Princess up for the night. The redeeming feature  of the hotel was the view.

Tomorrow in the daylight hopefully it’ll be dry so that Ron can get some hundred mile an hour tape, do some temporary repairs and we’ll head on to Valencia. When we reach Cadiz and have some time Ron will remove the screen  and do some repairs. May have to get training wheels on this bike.lol