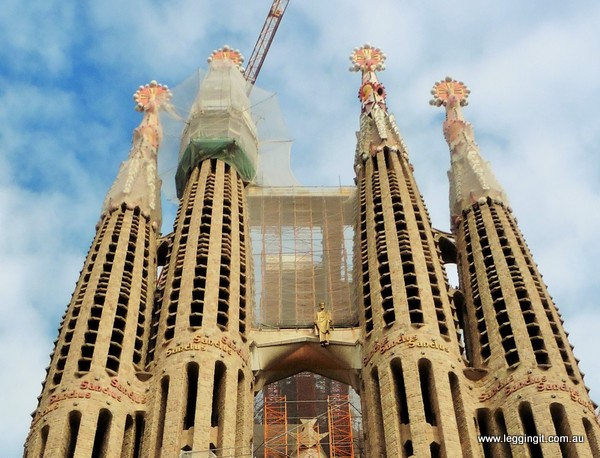 Before visiting Barcelona, I posted a question on a travel forum, ‘If I left Barcelona without seeing the Sagrada Familia, would I regret it?’. I received many answers and all were the same ‘Do not miss it!’.

Heeding this advice we discovered was Barcelona’s Sagrada Familia is like nothing on earth.

Designed by an architect whose professor described as “either a genius or a madman” and still under construction 132 years later.

In 1882 the foundation stone was laid for the Cathedral with the designer dying one and a half years later with Antoni Gaudi picking up the project. With him being referred to as ‘the finest exponent of Catalan Modernism Architecture’, the world has truly been blessed with an amazing building.

It took the final 43 years of his lifetime, to see one of the three facades ‘The Nativity’ completed. It’s said that he was so much of a perfectionist that the statues were based on models cast from real people and animals. Looking at them today you can believe it.

Luckily, during his life he made many models and drawings, some of which were destroyed during the Civil War when the Cathedral was occupied by rebels.

After the war the remaining models were repaired and work continued but very slowly..

Currently the main entry is via the Passion Façade, which symbolises the crucifixion and resurrection of Jesus. The statues and door of the Passion Façade was designed by Josep Maria Subirachs using some aspects of Gaudi’s designs including Roman Soldiers of an earlier design by Gaudi, the statues are not anatomically correct but are block shaped. There’s one which looks much like Gaudi himself in later years. Between the two door ways a statue of Jesus tied to a post and scarified. Over the doorway there are blocks with 16 numbers which when added let to right or top to bottom, amount to 33, the age at which Jesus died.

We caught a lift up one of the bell towers to take a birds eye view of the Sagrada Familia and to take a look at some of the mosaic work it was just sensational. All around the Cathedral are symbols, from words repeated three times like a prayer, to more obvious ones such as Jesus rising above the passion façade ascending to Heaven.
The tops of the different roofs are topped by bowls of fruits, grapes, oranges, giant seed heads, the towers have stars it’s amazing. On the outside the drains lead to gargoyles which consist of snails, snakes, frogs and lizards. One of the main features off the tops of spires and roof area is the use of mosaics

Gaudi has used elements of nature throughout, with the interior columns looking like trees with branches supporting the roof. The plane trees, which grow quite well locally, when they drop branches leave a big knot. He has recreated that knot in the junction of the support beams with symbols of the four apostles, and lighting on others. Inside the Cathedral there’s room for 8,000 people so you can imagine the space with huge tree like columns. There’s four red main tree shaped central columns, grey and cream outers topped with shaggy fringes just like being in a forest.

All the colours of the rainbow, purples, blues, greens, yellows, oranges and red light fills the cathedral as the sun streams through the gothic stained glass windows. Unlike other cathedrals many of the windows are round.

In the centre over the altar a crucifix and statue hang beneath a canopy surrounded by lights in the form of a halo. Grapes surround the bottom of the canopy and wheat the top of the canopy, the symbols of communion. Twin pipe organs flank the altar below.

There are circular staircases leading to the towers and galleries 15 metres from the floor with a capacity of 1000 singers. The lifts ride inside stone columns with circular ports and when they rise there’s a real futuristic feeling.

The Cathedral definitely has a feeling of tranquillity and provides areas where you can enjoy the peace away from the hustle of the city. Ushers keep control of the tourists that forget that the primary purpose of the Cathedral is for prayer. Soft organ music fills the air muffling the buzz of cameras. Sadly there’s still the odd tourists lying down to take “that photo” but in the whole you can get lost in the atmosphere.

Construction currently continues around the Passion Façade. They’re constructing the four towers dedicated to the four evangelists and the Virgin Mary Tower. Other work includes the four bell towers on the Glory Façade and the highest tower of all with a figure of Jesus. The Glory Façade will become the main entry when complete, telling the origin and end of human beings. There will be a hell and also the pathway to heaven by following Jesus’ teachings if all goes to plan. The Cathedral is planned to be completed by 2026 so we are looking forward to returning to see it completed.

Forget Notre-Dame-Du-Paris, St Paul’s or Koln Cathedral as Barcelona’s Sagrada Familia is like nothing on earth, whatever you do, don’t leave Europe without first visiting Sagrada Familia.