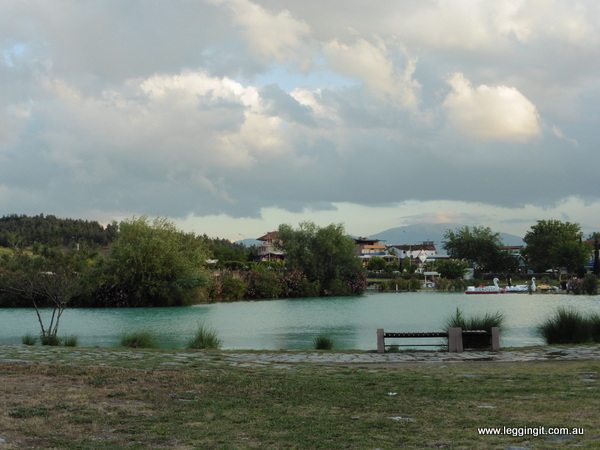 It was sad to say goodbye even though we’d only stayed one day. The grandfather, grandmother and son were all out to wave us goodbye as we headed from Egirdir to Pamukkale. Egirdir is a perfect spot, with a lake behind to explore, a huge mountain range in front of it and lots of old half timbered houses. The road out of Egirdir led up over the mountains towards Isparta, passing the Army base where each week they still march down the hill to Egirdir and muster in the main square.
Riding into Isparta we were struck by the colourful apartment blocks. A long row of identical apartment blocks line the road which have been painted in all different colours which give the area a really modern feel.

At Burdur we took a detour to find a cafe and check out the lake just as the rain started falling. Strangely enough even though the lake is quite large there were no lakeside cafe’s and no lakeside drives. However we found a nice cafe to take shelter from the rain and an English speaking client translated our order. 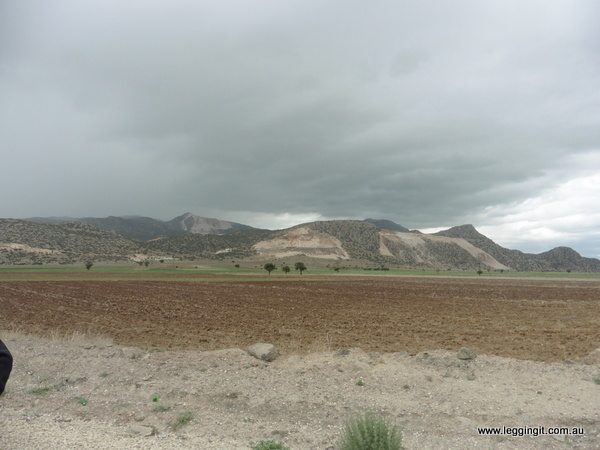 Heading out of Burdur the rain started again so we just kept our heads down and pressed on. The rain of the past few days has really turned the country green especially the young fields of wheat.

As we motored down a hill we spotted the flashing lights of a police car, causing Michele to squeeze me with her legs, giving me the slow down signal. I quickly came back to the speed limit as the car came into sight. As we approached it we discovered it was a very clever sign, designed to slow people down. Well it worked, and we were soon throttling back up to cruising speed.

As we cruised over the mountains above Denizli we saw the most beautiful sceneries. Low cloud had blanketed the whole valley below, with white fluffy clouds clinging to the hillsides. As we reached the bottom of the hill on the edge of Denizli those lovely fluffy clouds just erupted and we were caught in a deluge.

Even though there was only about 15 km’s to go I decided that it was time to get out of the rain. As soon as I spotted a restaurant I just drove straight up over the gutter and parked the bike. The restaurant was really good so we decided to have lunch and wait out the rain. By this stage the rain was hammering down and water was flooding the drains pouring into the front al fresco area of the restaurant. One of the waitresses was battling the influx with a squeegee.
We lingered for over an hour and as the rain eased off headed off again. Not far out of Denizli the rain stated again and by the time we reached Pamukkale it was hammering down. The owner of the hotel was expecting us and was out front waving as we approached. After parking the bike in front we dripped through reception to our room and shed our wet weather gear. 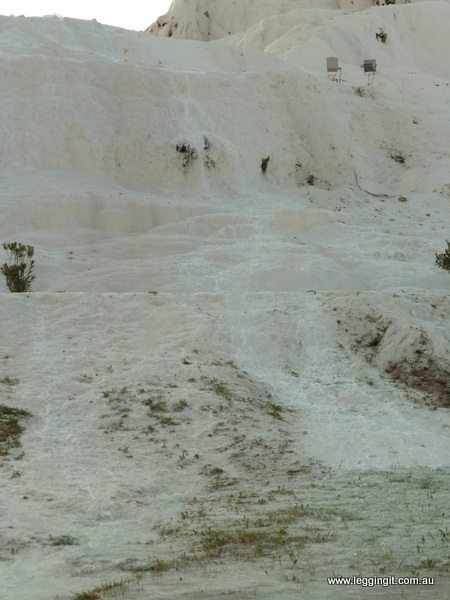 Surprisingly the weather eased off about an hour later so we took a walk up through Pamukkale. The town of Pamukkaleis known for the ruins of Hieropolis and its mineral waters. From the hill overlooking Pamukkale, water high in minerals spring from the mountain. In ancient times supposedly Cleopatra came here to bathe in the medicinal water. The spring water has transformed the hillside forming Snow White pools of calcium, called travitines and covering the whole hillside in a white crystalline covering. Honestly it looks like it’s covered in snow. 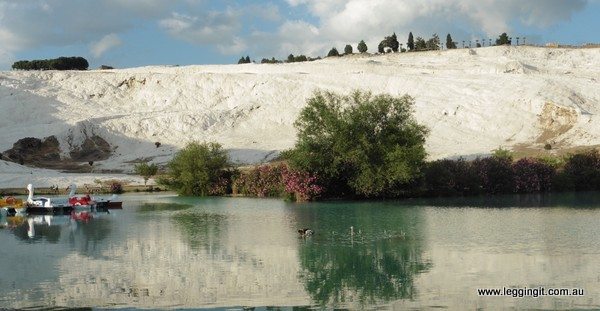 Below the hill is a lake filled with crystal clear blue water which flows from the hill. We met up with a young Aussie couple from Sydney who were backpacking around Turkey. Talking to them we realised that they really seemed focused. Like us they’d done a bit of couch surfing, and were trying to maintain a budget (although there’is a bit more regimented than ours) . They were on their way to Canada where Blue was going to play AFL for a local side. Supposedly Canada has the biggest AFL league outside of Australia which was quite surprising. We wished them good luck as we headed our separate ways.

Tomorrow we’re going to explore Hieropolis and wade in the mineral waters of the travitines. 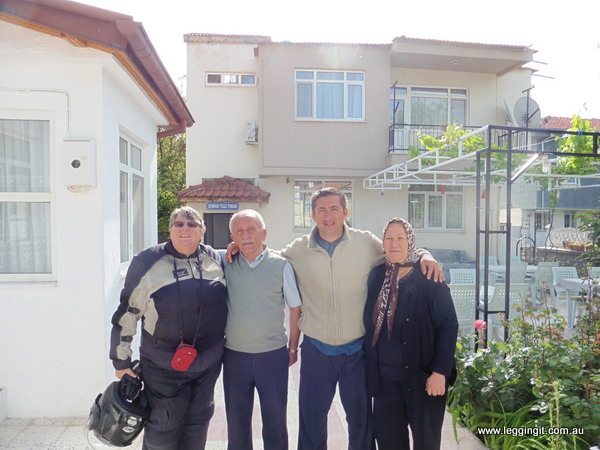