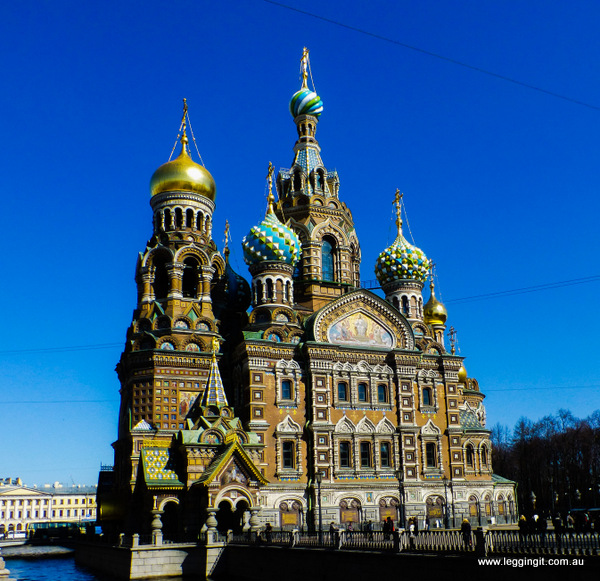 St Petersburg here we come… Awake mega early this morning as we had a booking for the 6.45 am train to St Petersburg. Leaving the flat at 0500 we were at the subway only 10 minutes later to find the subway locked. The subway doesn’t open until 530 and the first train at 539. The station police unlocked the doors at 520 and a small crowd of people shuffled through. The first train was early arriving at 526am so we were feeling a little more relaxed as we gained a few extra minutes. We changed trains at Belorussia and were soon arriving at Komsolskaya.
Heading out of the metro we were in a quandary which way to go. Straight ahead was suburban trains and there was no signposting to Leningradsky Station. We asked a lady who pointed us towards another ticket area and gates but when we arrived the guard pointed us back the way we came. Uncertain where he meant we headed in the direction he pointed which had a line of ticket booths and staffed ticket booths in front of a construction zone. As the minutes ticked away we made our way to the front of the line and at the last minute someone tried to jack in front of me, he was having a personal crisis…..well mate so were we. I showed the lady the tickets and asked for St Petersburg she pointed around the back of the Metro (which is probably where the guard was pointing but as it was still dark the station entry wasn’t visible).

We walked around the back of the Metro and sure enough Leningradsky Station was there. Crisis averted……phew. We put our bags through security, checked the screen for platform details and after another security check were soon on platform 7 and looking at the Sapsan (the top of the range) Russian bullet train which would be shooting us down the track to St Petersburg.

The Sapsan was a high quality train similar to the German bullet trains we’ve used in the past. We found our seat ordering a few coffees and some food. The coffees were great the food was pretty average. The trip from Moscow was 735 km’s which the Sapsan did in 4 hours. The other trains take about 8 hours. We travelled through some pretty uninspiring countryside. There were lots of swampy low lying areas lots of forests and logging areas.

We arrived about 1230 and stored our bags in the left luggage lockers and ventured out to check out the city. Getting a metro card was a bit of a drama as we had to pay for the card, then pay for the top up. We weren’t allowed to share one card so we had to shell out more of our hard earned for a second card and top that one up too.

We headed off for the platform and caught the wrong train then got off at the wrong station on the way back. Talk about not knowing whether we were Arthur or Martha. The metro system in both Moscow and St Petersburg have interchange train lines where you can change from one line to another. Unlike the rest of the world who name it one interchange station the Russians name each line at the interchange different names (you can have three names of stations at one interchange) the name depends on which line you are on.

Eventually we got to where we wanted to be Nivitsky Prospekt coming out of the subway across the road from the Singer cafe. The old Singer factory in St Petersburg was in this building which still has the company statues on the roof. The factory has been converted to office space where there Russian version of Facebook is situated, a massive book shop and a high class cafe, restaurant with huge windows to look down over the city. It’s a magical spot.

Across the road is Kazan Cathedral, which strangely under the communist regime, spent some of its life as the Museum of Atheism. Down the street towards the main canal is the Church of the Spilt Blood, so named because this is where Alexander II was assassinated with a bomb. The church is as ornate as St Basil’s in Moscow, with multi coloured domed roofs, frescos, ornate tiled roofs, and so much more it’s so hard to describe the absolute beauty of the place.

While we were checking out ticket prices a local girl named Anna showed us a brochure of the canal cruise she was promoting. As most of the churches, cathedrals and some of the museums are closed on Wednesdays we decided to spend an hour cruising the canals. St Petersburg is built on a heap of islands so there’s canals connecting all different areas. The cruise cost 500 roubles for the hour and we really fell in love with St Petersburg.

The buildings were absolutely stunning although they were from all different eras they were well maintained and had gave the city a really special feel. It reminded us of the canal tours in Amsterdam. There were mansions, theatres, statues, churches, cathedrals, low bridges. All sorts of things to happily click away at with a smile frozen to our faces (it’s not that we were happy the whole time the smile was actually frozen there lol.) There was a running commentary the whole time and whoever made the recording must’ve been enjoying themselves because it didn’t sound very cut and dried, but really upbeat. The only problem was that it was all in Russian and although we recognised some of the names and some of the words for us it was as useful as listening to a Beatles album backwards. 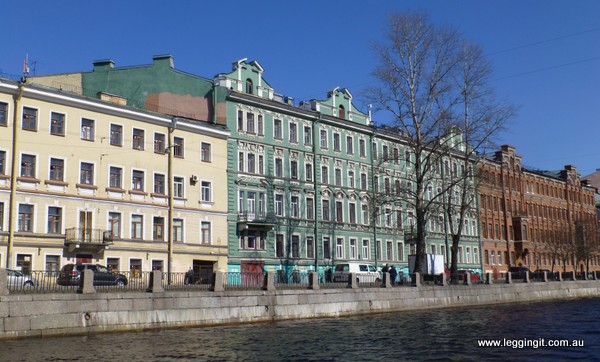 After the cruise we saw Anna again and thanked her for suggesting it we had a great time.
We thawed out by heading back to the Singer Cafe for a coffee overlooking the Kazan Cathedral. It’s got big warehouse style windows so the view was excellent although with all that glass a little warm. Ah the extremes of temperature. lol

The Kazan cathedral was modelled on another cathedral St Peters in Rome and it was described as “an ugly imitation on a smaller scale” but with everything beauty is in the eye if the beholder. In the middle it was a huge dome and from there a semi-circle of huge columns extend. At one end there’s a statue to Mikael Zutuozov one of their war leaders who fought against Napoleon. Inside the cathedral there’s lots of brown marble on the columns and floors, which highlights all the gold and brass of the screens, icons, shrines, candelabra. The cathedral was busy with a huge line up of people who were heading to confession maybe and lots of other people praying to saints and burning candles. The staff were busy cleaning, snuffing out candles and like all churches there was a line up at the church shop for all sorts of religious items. Like the cathedral in Moscow and a few of the churches we’ve been in there was also a clergical staff presence and they were sitting talking with people.

The rest of the day we spent walking back along the Main Street checking out shops, churches, theatres admiring the architecture and enjoying the sunlight. It’s quite amazing the difference between Moscow and here and we can understand how St Petersburg got its name as the “Venice of the North”.

We caught up with our Couch-surfing host, and immediately liked her. She was animated and chatty, we really enjoyed finding out about her view of Russia. She told us of how in St Petersburg, especially around the city centre, after the destruction of the war apartments were built and each room would be privately owned with shared cooking and bathrooms (komonalkaya). It was unlike other cities which weren’t damaged and self contained apartments were the norm. She lived in a komonalkaya flat with two others sharing facilities and she said more often than not the people who live in the flats don’t get on and nobody talked. While it seems a strange set up it also looks like the ideal way to move into the property market but obviously with some downfalls.

We enjoyed a lovely meal of fish pie and salad before heading off to bed.