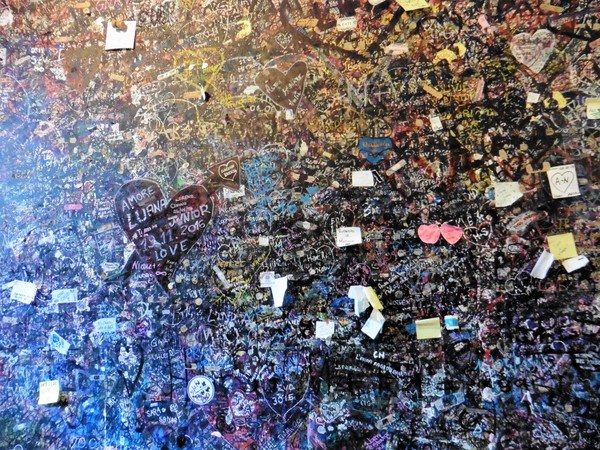 It was with long faces this morning as we said goodbye to Verona, today we are heading to Rubiera with a stop in Parma. We’ve really enjoyed our short stay despite the low temperatures. The old city of Verona with its lovely vine draped balconies and lively piazzas is really beautiful to explore. The hotel has also restored our faith in Ibis after a few bad experiences elsewhere. Heading out of Verona we passed through big industrial areas before we reached the country. 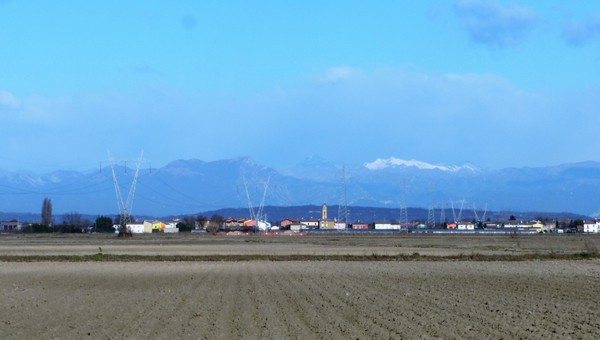 ln the towns around Verona there were lots of huge tracts of farming land. Much of it was either in fallow or grapevines but we had some great views of snow capped mountains. Around Castel d’Azzunno were large areas of grapes, espaliered fruit trees and green houses.
From all the harvestors and tractors using the roads the roads were just trashed. It was hard picking a line to ride with so many potholes and subsidence. One of the other reasons causing the subsidence was the canals on either side of the road. The canals however were home to grey and also white cranes, grebes, and other non migratory birds which were hunting along its waters.

At Mantova we were surprised by the big lake and river running through the city. The road was a real rat race with long lines of traffic banked up. As we were on a bike we cut down the middle of the traffic expecting a crash or roadworks to be causing the congestion. Getting to the head of the traffic we discovered it was actually caused by a pedestrian crossing at the train station. The traffic on the opposite side was just as bad but it was also blocking the round about. Obviously a result of poor town planning. 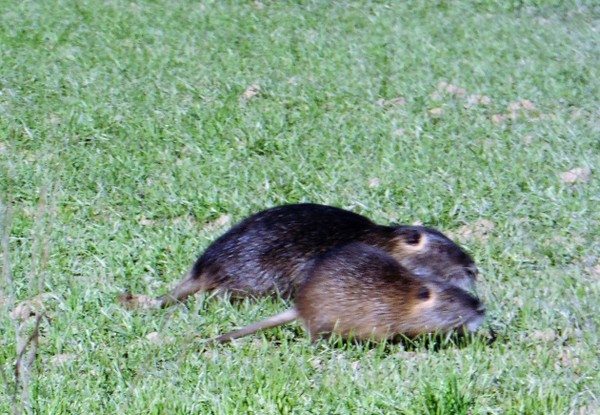 Once we cleared Mantova we were soon in the countryside. Big fields in fallow, silos and corn stubble surrounded us on both sides of the road. Near Cassola we spotted two otter like animals playing in a field beside a canal. Michele snapped a photo and I did a u-turn. Michele has been trying to see otters in various places over the last three years.

This time we thought we’d hit the jackpot. It was hard to determine what they were as they scampered into cover. However, the photo revealed they were a type of river rat known as nutria (coypu). They’re also known as beaver rats or little beavers. They were once farmed or their fur. As we headed out of Cassola we spotted more nutria (coypu) feeding on grass along the river. They were quite big, some at least 2 foot long, (60 centimetres). Obviously the conditions around the area suit them.

As we passed through the edge of Sabbioneta we were quite surprised by the red brick fortress walls. It was the work of Vespasiano I Gonzaga the duke of Sabbioneta who established a fortress town on the edge of the Po River about 20 km’s from Parma. It’s quite amazing that a town featuring grand old buildings and palaces is stuck in the middle of nowhere. Maybe next time we are in the area we can have a look around. 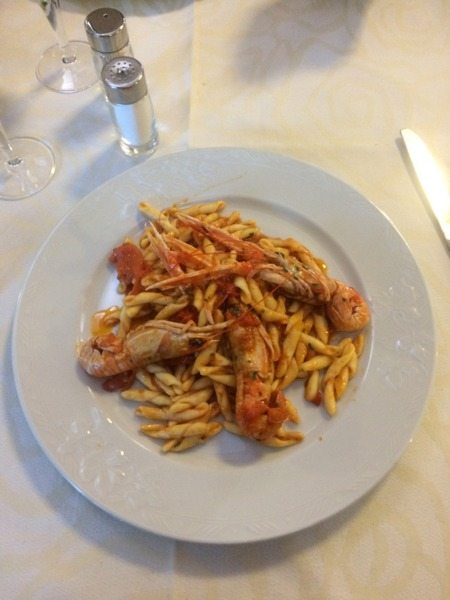 Arriving in Parma we had problems locating the Parma Ham museum. We rode around the central city until we just gave up. The centre of Parma is actually quite massive with lots of old buildings reflecting the glory years. On the way into Parma we’d spotted a ham sign and restaurant so we reversed our course. 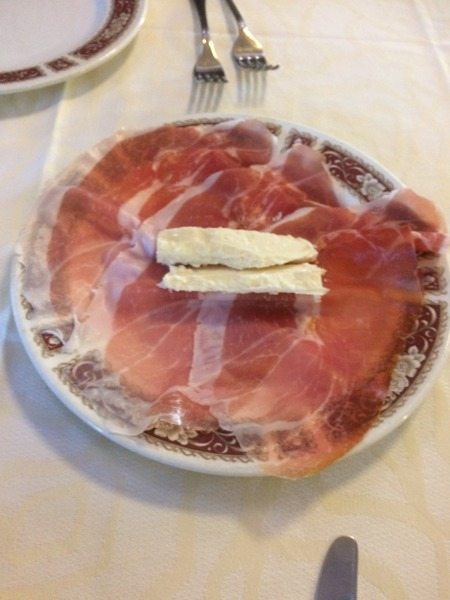 Verdi Ricordi was packed with locals so as you can imagine the volume level was on full. Arms were flailing about in the most italian fashion as locals chatted. The lunches coming out of the kitchen looked magnificent so we ordered an anti pasto plate of parma ham with chunks of parmesan cheese. The flavours could best be described as intense. The way ham should be. 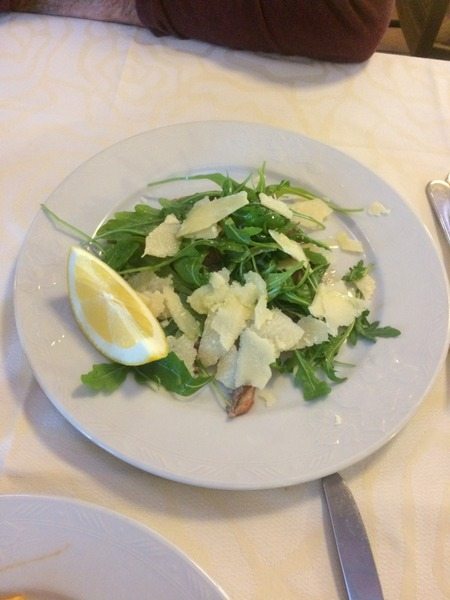 The antipasto was followed up with grilled beef, for me and scampi for Michele. They were simple, fresh, perfectly cooked and tasty meals. We finished the meal with chocolate salami. It was sort of like a hedgehog roll with chocolate and biscuits.

The last stint was only about 50 kms through small towns surrounded by farmland. There was a mixture of grapes and open fields waiting for the summer crop and blokes selling oranges by the side of the road.The area around Modena is famous for its vinegar so we saw quite a number of vineyards. The satnav bracket was being a pain. Maybe it was the bumpy roads, the cold weather or both. I don’t know. However I gave up counting the number of times it fell off. It may be time for a permanent solution. As soon as we arrived in Rubiera, the satnav went flat. It was virtually streets from the destination.

I plugged it back into the bikes power supply and we found the hotel, Nouvo Hotel Moderno. It was a lovely little family run hotel where the owner greeted us quite warmly. He ushered us to a table in the bar and set up a pair of coffees for us. It set the tone of our visit, as there was no rush. After a coffee and settling in we headed for the old town centre to find some dinner. 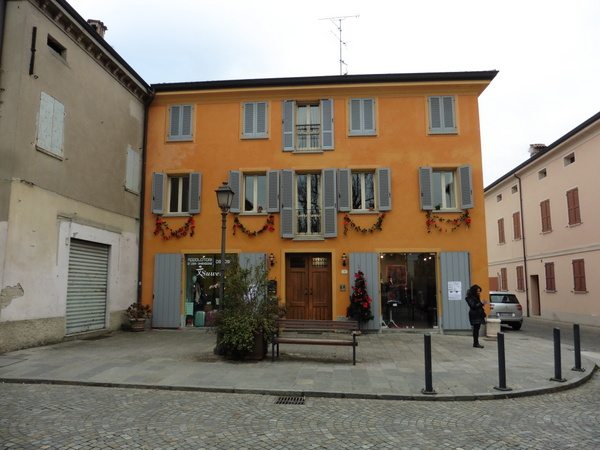 It was a lot smaller than we anticipated with many places closed for winter. Quite surprisingly there was a Michelin restaurant in town which after checking their prices, we gave a miss. Instead we found a bakery and bought a few drinks. They in turn gave us plates to help ourselves to an array of finger food on the counter. It was enough to fill the spot but we wouldn’t eat like that every night.

By the time we reached the hotel the thermometer had dropped again. We thought by now it would be warm but the temperature just keeps on dropping. At the hotel we played some cards and the owner brought out his bottle of local poison along with some parma ham and cheese.  Although he speaks no English and us no Italian we had a great chat. If this is what this area is like I think we’re gonna enjoy our time here.