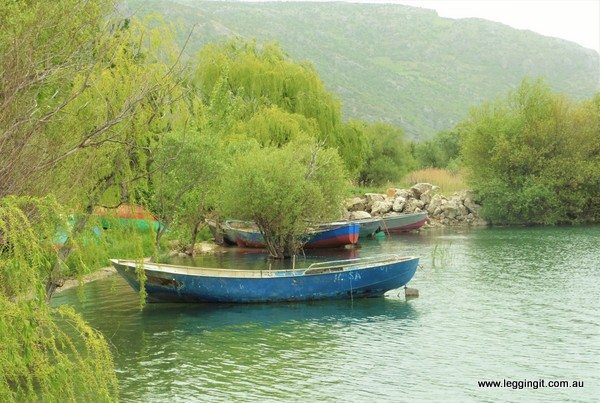 Today we travelled from Konya to Egirdir. It was a slow start as we didn’t order an early breakfast yesterday so we waited until breakfast went on at 9.30. Despite that the bike was packed before breakfast and we didn’t linger so we still hit he road by about 10am. The streets were quite eerily empty because of the national holiday so there were no honking horns and no crazy drivers.

Heading up through the hills overlooking Konya we got a great view over the city despite the haze.

The road to the west of the city took us through some dry barren hills where it seems that a reforestation program is starting before heading past a huge lake which supplies water to Konya. As we headed west the countryside opened up into rolling hills which were covered with a checkerboard of green fields of wheat and fodder. There were also the occasional fields of vegetables with large groups of ladies planting seedlings or hoeing weeds. Seeing them working bent over it’s easy to see why there are so many old women with bent backs in the farming communities. In distance snow covered mountains ringed the valley below. 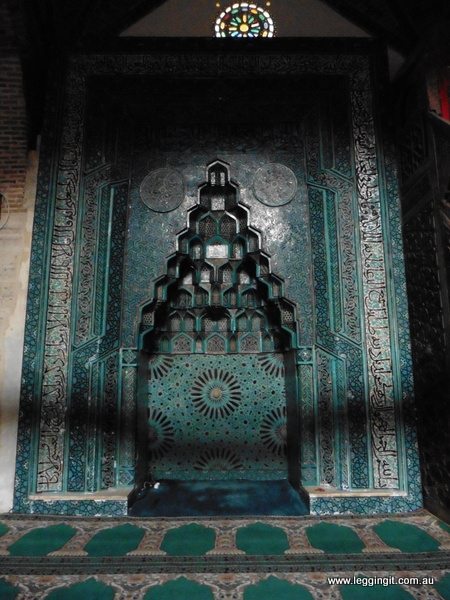 Our first stop was Beyşehir which had been suggested by Burek, whom we met two days ago in Konya. Beyşehir is home to Eşérefoğlu Mosque a 13th-century wooden mosque, not far from Beyşehir Lake. After the Byzantines were defeated by the Seljuks, they established their Sultanate of Rûm in the area of Anatolia. Before his death the governor Süleyman Bey, built the mosque in Beyşehir the capital of Eshrefids beylik, a small principality of the Seljuk sultanate. Outside the mosque a pair of ladies flanked the door selling dolls, scarves and souvenirs. Michele grabbed my bandana to cover her head but one of the ladies spotted the opportunity for a sale cornered her at the entry door. Despite Michele’s protests she wrapped a scarf around her head before proclaiming her to look like a real Turkish lady.

Entering the mosque we were amazed at the giant cedar pillars supporting the roof. The tops of the pillars and parts of the ceiling were decorated with simple red and blue designs. In the centre of the mosque is a pit which up until the 40’s was filled with snow from the nearby mountains to provide cooling in the summer months and humidity to prevent the cedar from drying out. 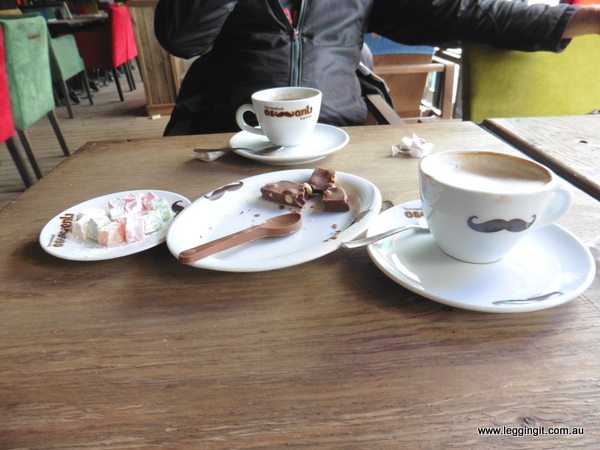 Afterwards we checked out the lake before heading to a funky cafe called Oswanli. It has a great setting overlooking the river which runs from the lake. Painted in bright colours and with furniture all colours of the rainbow it seems a bit out of place in this part of the country. We ordered homemade hazel nut chocolate which was superb. When our coffees arrived with chocolate spoons they had our vote. Then a plate of Turkish delight arrived. We really haven’t seen too much Turkish delight in our travels and when we have it’s been really expensive. There was a great variety of flavours mint, lemon, rose, and Michele’s new favourite orange.
Beyşehir was a great place to stop and we were glad that Burek suggested to visit. Unfortunately his uncle wasn’t home so we didn’t meet up with him.

The road travelled through lots of great countryside green fields and fruit trees. Near Bagilli the whole valley was just covered in orchards of cherries, apples, and apricots. Big packing plants, and cold stores signified that this was a major fruit growing area. 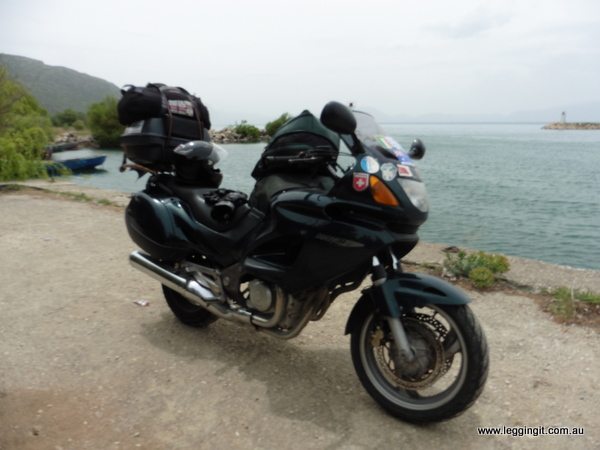 Egirdir sits on lake with a row of apartment blocks lining the main road into town. In the streets behind them you still find a few older half timbered houses dating back hundreds of years. We were staying out on the island so rode over the causeway and after a slow tour around the island we saw the sign to Peace Pansion. We were greeted by a lovely Turkish grandfather, his kiwi daughter in law and his grand kids. After settling in we learnt all about how this kiwi family came to be in Egirdir. 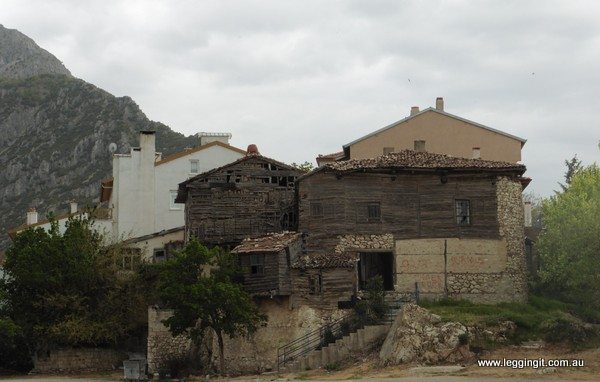 Later in the day we went for a walk around the island discovering old half timbered houses in various stages of decay. Some had sheet metal nailed over the upper areas of the house. Around the island were a few tombs to discover with the sarcophagi draped in green silk and a Turkish turban wrapped around the headstone. 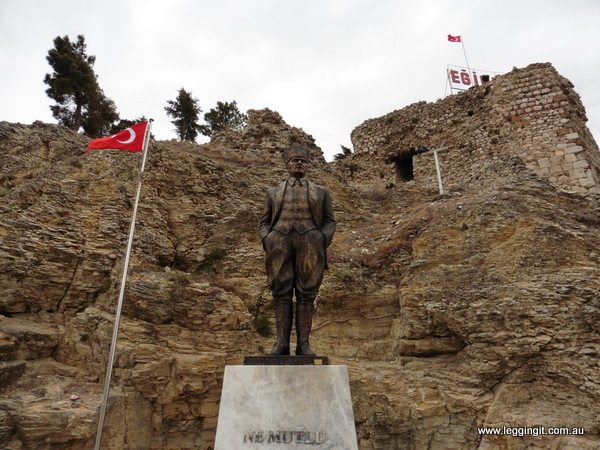 Between the island and the town an old Byzantine wall still stands it was used as defence against attack from the mainland.

At this time of year Egirdir seems very quiet and supposedly it’s visited by people who enjoy the lake.

After lunch overlooking the lake we caught up with the Turkish Kiwi son from the Pansion. He talked about growing up on the island when there were lots of kids. These days it’s very slow with many people moving to the larger cities so there’s not many kids which is a real shame.
Egirdir is a really chilled out place it’s a shame we are only staying one night.