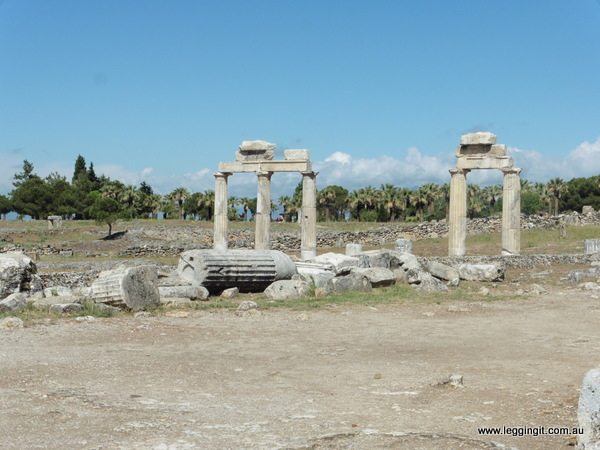 After arriving in Pamukkale yesterday, today we decided to explore Hierapolis, an ancient city which traces its roots back to the 3rd century BC and the ancient Phrygians.
Heiropolis sits on the hill above Pamukkale and can be reached by either the northern gate and walking up through the travetine area or via the southern entry which lies a few kilometres further up the hill. We decided to take the bike and head up to the southern entry.
Entry prices seemed pretty reasonable at 35 TL($16AUD) so after a 8TL cup of instant coffee (beware of food prices) we grabbed a map and started to explore. 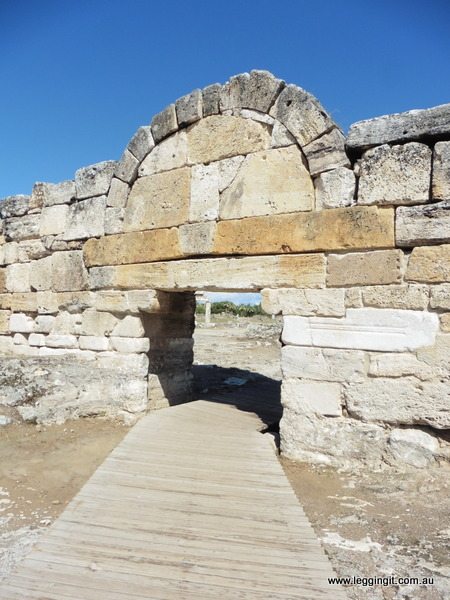 Heiropolis was founded by the Phrygians when they built a temple in the early third century BC, and the hot springs soon became popular. By the second century BC, Hieropolis had become a spa town with the hot springs being associated with healing powers. A whole industry grew in association with the hot springs with doctors prescribing the water to cure all sorts of ailments.
In 133 BC the city came under Roman rule and much of the what remains today can be traced back to them. During roman times Hieropolis had been struck by huge earthquakes which destroyed the city in AD 17 and again in AD 60. Under Tiberius and later Nero the city was rebuilt in roman style. Later in the 7th century the Persians and another earthquake decimated the city. In the 14th century another earthquake reduced everything to rubble and the city was abandoned. 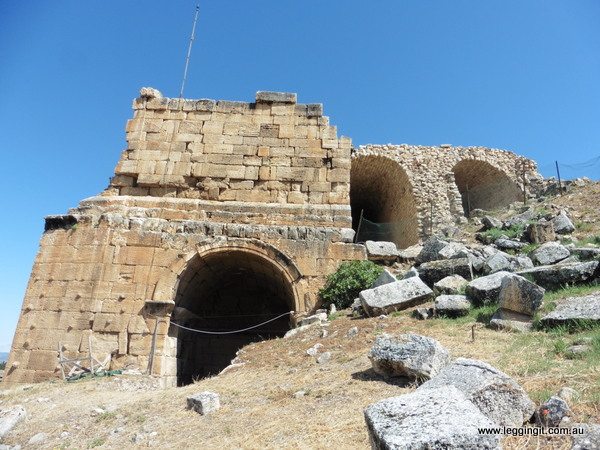 Wandering down through the site we scrambled over massive ruins of buildings and temples with columns sticking up. Although only the back and side walls of the Nymphaeum remain, it would’ve looked amazing in its day filled with the clear blue spring waters. From the Nymphaeum water would’ve been piped to the wealthy people’s houses but poorer locals would’ve visited here to collect their water.
The nearby spa is built around the remains of a 20th century hotels pool. Built over the original ancient pools the spa is quite popular and crowded even this early in the season. This cost an extra 300 lira  to enter. Across from the spa, housed in the ancient hamam is the museum. Around the outside lie hundreds of carved items gathered from around Hieropolis and inside the museum more valuable items from across the region. Entry to the spa and nearby museum was two extra fees and as we didn’t have our bathers we decided to skip them. 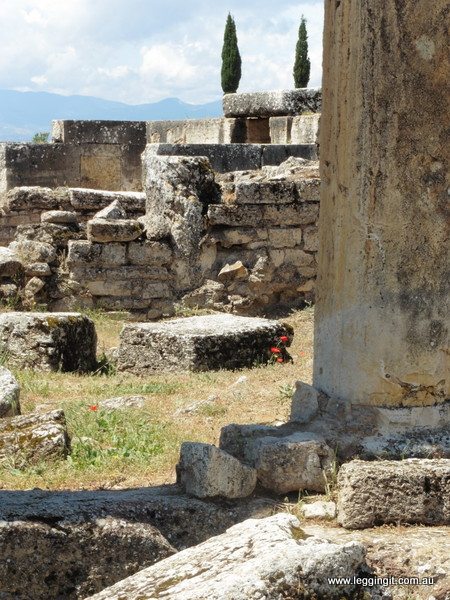 To the east of the spa we walked along the top of a concrete wall exploring old temples and churches hidden amongst the long grass. Whilst we were exploring we discovered a fault line, the reason for the destruction of Hieropolis. Not far from the ruins of the church further up the hill is Phillips Martyrium, built on the site where in AD 80 Phillip was crucified. 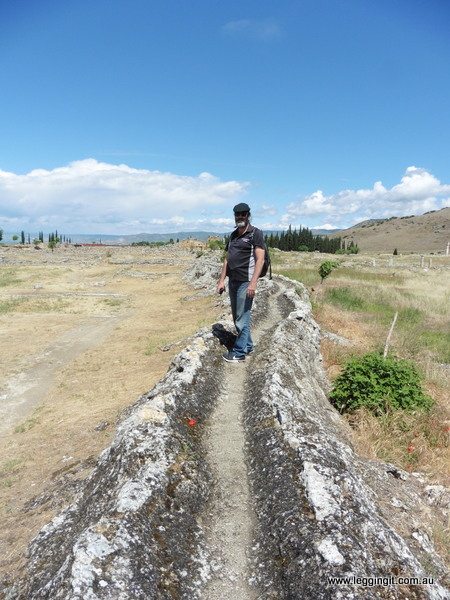 Around much of the lesser visited areas of the site the grass has been allowed to grow quite long so we stuck to the top of the concrete wall as we navigated from the ruins of one old building to the next. 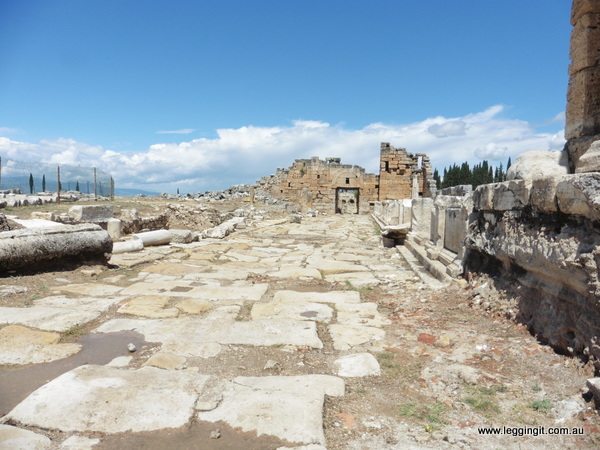 One of the main features of Hieropolis is the paved marble street leading through the city gates. The street is lined with columns and gives an insight into the grandeur of the street as it leads past more temples. 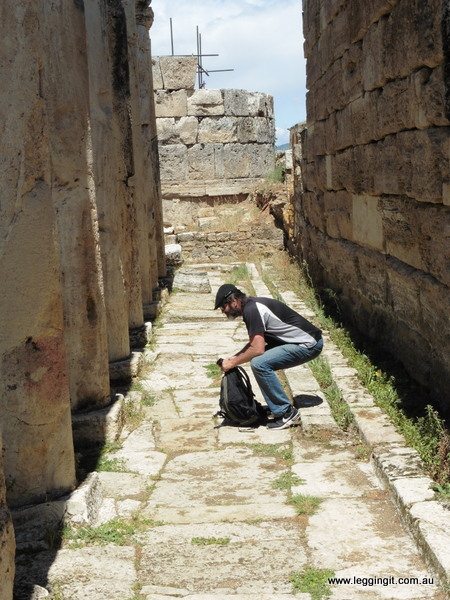 And of course no Roman city is complete without a latrine. 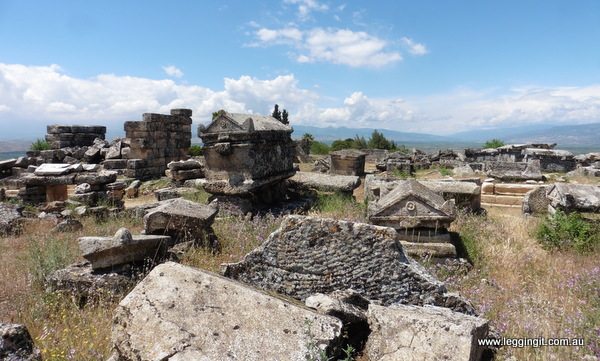 Beyond the city gates lies a spectacular Necropolis. It’s quite spectacular in that it has different styles of burials from domed black stone tombs, carved sarcophagi and round roman tombs. Pedestals ranging from 2 to 4 metres wide rise up into the air to keep the inhabitants of the sarcophagi above the clutches of the god of the underworld. Many sarcophagi and lids lie scattered across the necropolis where ancient earthquakes tumbled them from their pedestals. They also bear the sign of grave robbers with holes smashed into the side.
Wandering through the necropolis is quite amazing with all the monumental stone work. 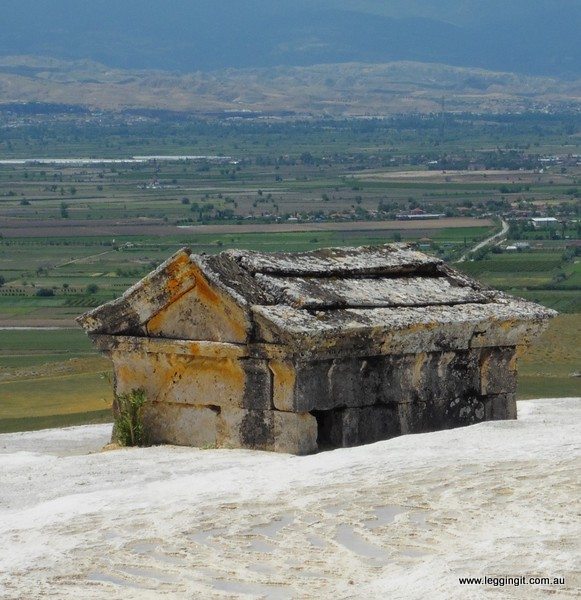 The views from Hieropolis across the valley surrounding Pamukkale are just amazing, with a wide expanse of farming area surrounded by distant mounatins. A few of the sarcophagi on the edge of the hill are slowly being reclaimed by the limestone which Pamukkale is famous for. Pamukkale literally means “Cotton Castle” and looking at the hill it’s easy to see why. Years of spring waters flowing down the hills have left them covered in snow white limestone. 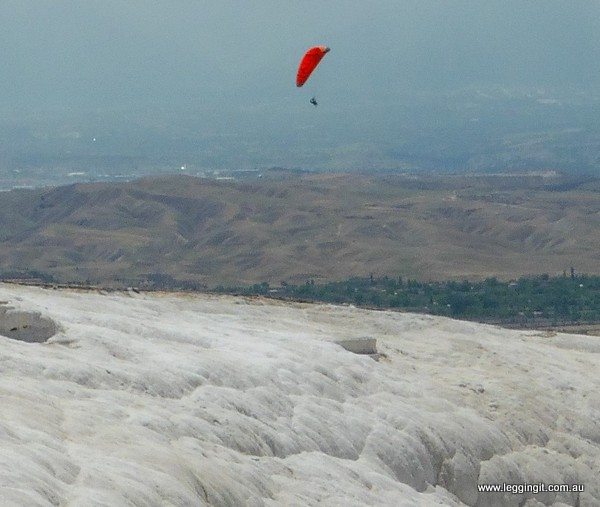 With a little assistance from the staff a series of man made pools have been formed and covered by the limestone deposits creating a fairylike network of pools. On the pathway leading from the hill to the north gate the scene is just amazing with a series of pools of varying depth with each pool flowing down into the next. In the brilliant white of the limestone pools hundreds of people wade or bathe in the crystal blue mineral waters. We even took our shoes off to join in. Near the entry to the pools a guard stands ready with whistle on lips for anyone entering the area wearing shoes. One lady made the mistake of ignoring the signs and soon started a stream of whistle blasts. 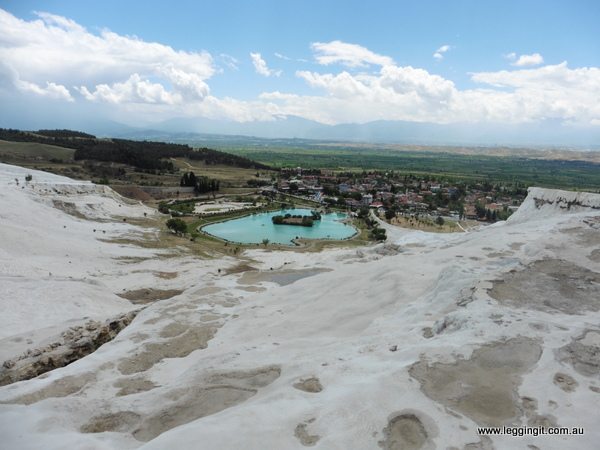 As this season has been quite dry the water has been regulated with only a small amount released into the pools along the track from the north gate and a small amount from the hill down into the lake at the bottom of the hill. On one day per week all the water is turned on so water flows across the travertine fairy pools, down the front of the hill and down through the pools. It would be even more spectacular than today. As we were soaking our feet dark rain clouds started rolling in so we decided to take a slow walk back to the bike.

After spending most of the day exploring Hieropolis it was time to head back to Pamukkale for tea and a well earned rest. Just off the Main Street we found a cheap and cheerful restaurant serving the same sort of the meals as the Main Street but charging half the price. Definitely the best place to eat.

Hieropolis and Pamukkale with the mixture of history and natural beauty have been a great place to visit for a few days.

Tomorrow we head back to Akyaka, one of our favourite destinations in Turkey.