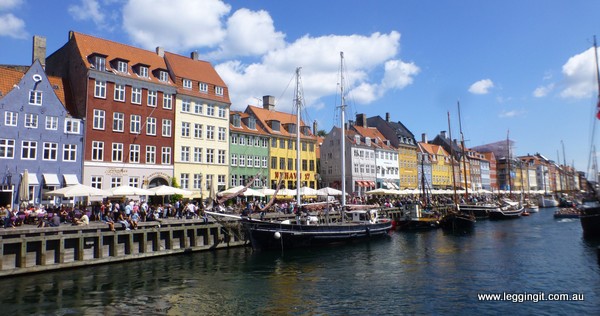 What a corker of a ride into Copenhagen. We had just missed peak hour so decided to take the beach road and we were not disappointed. The weather was absolutely beautiful, the sun was in the right position to highlight the old traditional houses along the beach, painted stark white with lovely thatched roofs and the wooden crosses holding down the ridge capping.

We stopped near an old fort and enjoyed a cup of coffee before wandering over to take a dekko at the old fort. These days it’s been converted into a caravan, camping area, with restaurants overlooking the beach and a few of the old guns reminding everyone of its former life.

The plan was to park near the centre of the city near the town hall where we’d planned to take a free walking tour but when we arrived in the city we parked nowhere near Town Hall and had a decent walk to get there. When we arrived we met an Aussie bloke who was taking the tour. The tour was a mixed bag of people Germans, Canadians, Kiwi, Aussies (there was even someone from my hometown)

The tour was really good showing us the sights of Copenhagen which during its history seemed to have heaps of fires which resulted in buildings burning down. There were some fascinating buildings such as Christians Palace and the Stock exchange which is one of the only buildings not to have burnt down. It’s said that the dragons on its roof protect it from fire. Hans Christian Anderson features a lot in Copenhagen and a few properties proudly display signs that HCC once owned or lived at that address along with lines of Japanese taking photos of the signs hmmmm….

We arrived at the palace in time for the changing of the guard. The guards still wear traditional ceremonial uniforms with big black Fur shakos on their heads similar to the British Grenadiers. Whilst we were watching the changing of the Guard we ran into the lovely couple from Wales who we’d met yesterday, talk about coincidence. We finished the tour with a visit to the Marble Cathedral which once again was so different from others we’d seen. Stunning paintwork on the roof and lots of marble (funnily enough)

After the tour we headed further along the waterfront to find the Little Mermaid and yes true to her name she is little. There were bus loads of people and tour boats loaded to the gunwales with people all jostling with each other to get a photo of the legendary statue.

The light was all wrong on the brass statue so getting a decent photo was out the question, ah the misery lol. We drowned our sorrows in a traditional Danish hotdog and followed up with a Danish Icecream because Denmark had suddenly turned hot. We asked ourselves how did that happen?

On the way back towards the bike we stopped at the Anglican Church and were amazed once again how different it was to other churches. Near the old docks area was a canal boat tour and after checking the two sets of prices decided on the cheaper one so we took a trip around the harbour. It was ok we got to see Copenhagen’s most exclusive restaurant where a weekly wage will buy a glass of tap water, minus the glass. We also saw the results of an architecture degree in the wrong hands. The tour took us around a lot of the areas we’d walked around earlier and had a lady giving a commentary in English, so not too bad.

The ride home wasn’t as good as the ride in with the sun coming from the opposite direction. We cooked our wonderful hosts a dinner of Nachos and then close to midnight we took a run out to the beach to try and catch the setting sun. It appeared to be going down in one area of the sky but coming up in another area, was a bit strange to see.

Tomorrow we’re off to Gothenburg.