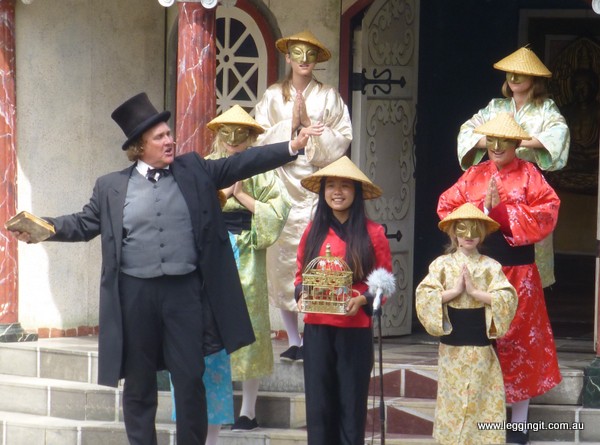 The day of our last day in Scandinavia dawned, we have had an amazing time, met the most interesting people, caught up with old friends and made new ones. It is sad to say goodbye but we know we will be back as there is much more for us to see.

It was a quick run from Helsingor to Odense after saying goodbye to our Couchsurfing friends. Hopefully we’ll catch up again in Europe somewhere later in the year.

Arriving in Odense we went around in circles due to road-works before finally finding a road barring vehicles which led to our destination where we parked up amongst the bicycles.

After a smorgasbord lunch the Hans Christian Anderson show started in the theatre at the front of the grounds with crowds of people spread over the lawn. It was mostly in Danish with some English but what amazed us was how many stories we knew.

After the show we entered the museum which contained a building which may have been his first house furnished with fittings which was suitable for impoverished families of the time. The museum traced his life from a very impoverished beginning through to his eventual fame. Reading between the lines it’s quite easy to imagine that many of his stories would have been drawn from personal experiences.

As a boy dreaming of being an actor he moved to Copenhagen at 14 and pestered the directors of the day for a part on stage. His features were not stage material but he had an excellent soprano voice and was soon working for the Royal Danish Theatre. Unfortunately his voice broke and at a friends prompting took up writing. The director of the theatre persuaded the King to pay for Hans education and after some horrendous years at school he soon released his first story. His early stories weren’t well received initially due to poor translation especially of the humour and tragedy.

However the first two instalments of Fairy Tales are renowned today as masterpieces as they include tales such as The Tinderbox, The Princess and the Pea, Thumbelina, The Little Mermaid and The Emperor’s New Clothes.

Reading about his holiday at Charles Dickens house was quite interesting with a short stay extending to five weeks and led to him being asked to leave and Dickens ceasing all correspondence.

There were stories of his loves mostly unrequited as the objects of his affections were unattainable. There were also stories of those who stood by him throughout his life.
The museum gave a great insight into the man warts and all with artefacts from his personal collection including paper cuttings which he was quite adept at. Obviously his early years working at a tailors taught him how to wield a pair of scissors. There were a number of very intricate designs and pieces.

Overall an interesting museum with a great insight into the man.

Traveling from Esbjerg to Harwich

Leaving Odense it was a quick run down to Esbjerg where we joined the queue of motorcycles heading to Harwich. We met up with a few couples heading home after riding around Denmark and Sweden. It was interesting comparing how bikes were set up as most were travelling two up also. It was also funny as we were joined by a guy (not the slimmest) riding a bike but towing a trailer containing an esky full of his camping gear.

Late in the afternoon we boarded and after strapping down the bike we dropped our bags in the cabin and headed for the cafe. We met a few locals heading home and watched the local entertainer putting on a pirate show for the kids. After a feed of fish and chips we adjourned to the cabin where we were waylaid watching the Monty Python Anniversary show.
Surprisingly the wild North Sea was replaced by the “Mild” North Sea and the crossing was smooth as silk. We caught the end of entertainers magic show after breakfast and it was pretty good. A really pleasant bloke and overall the food was pretty good so the ferry from Esbjerg to Harwich got a thumbs up especially form Michele who managed the 20 hour trip without any seasickness tablets.

Arriving back in England we met an immigration official who accused us of coming into the country to work and all sorts of outlandish accusations. Obviously “Welcome to England I hope you enjoy your stay and spend lots of money” was not in his vocabulary. We kept our heads down as sometimes it’s best to let it pass over you and eventually we had our passport stamped and we were on our way back to Michele’s mums in the outskirts of London.