We were up early and after breakfast headed to Skagen. Skagen is quite picturesque with all the old houses painted yellow with red tiled roofs edged in white and white window frames.

There was a huge marque set up at the wharf, another near the culture centre and they were the main stages. Throughout the town on almost every corner, at cafes, pubs and along the wharf there were buskers playing all sorts of music from traditional Danish music, folk to rock and roll. There were even a band from somewhere in the Americas dressed in traditional clothing with feathers playing pan pipes.

The wharf marquee was pumping to a Scottish three piece band called Càirdeas so we joined in. That’s when we experienced the Skagen clap frenzy. After every song everyone started clapping as if the band had left the stage and they were trying to entice them back with that almost clap chant, it was very strange. Càirdeas were really good playing traditional Scottish songs and they really knew how to work the crowd who were really keen to have a good time. 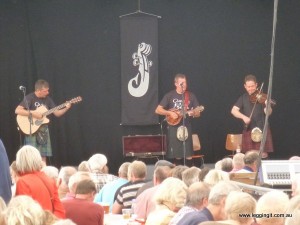 After they’d finished we headed up to the other stage where we caught a bit of an Australian band called the Perch Creek Family Jug Band. They were playing originals and had a great sound. It was great hearing Aussie music again

We then picked up our tickets to see Santiano, while most of the music is free here they were part of the big concert and cost about $100

Not far away we stopped at a cafe for lunch. The waitress came out, translated the menu and when Michele returned I translated it for her. We settled on The Pulled pork which was slowly roasting on a spit near the front of the cafe. Another lost in translation moment happened as two open sandwiches covered in Prawns arrived.lol It was a nice lunch however with a band singing rock and roll tunes nearby. 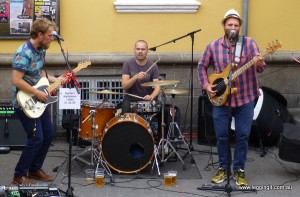 The Flekkefjord Choral Society, which had about 100 people onstage, was singing Norwegian songs which the crowd was singing along to when we returned to the wharf marquee. The crowd were going off.

An Australian duo called the Borderers followed them singing Irish and Scottish standards and a few they’d written themselves. They were pretty lively onstage and really worked the crowd, although hearing Loch Lomond for the third time that day was a bit gratey. It’d be nice for bands to talk and coordinate their play list. 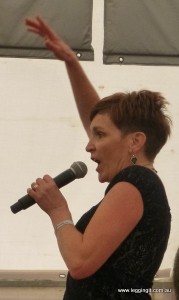 Next up was our local favourite Toby Beard. For us it was a breathe of fresh air after heaps of bands playing old standards to have someone playing originals. The massive crowd didn’t really get into it in the first half but Toby tried her hardest putting passion and energy into her songs. The turning point being when the lead fell out of her guitar she kept going belting out her song while calmly putting the lead back in. After that the crowd went nuts. Later as she wound up her set they were clapping and chanting with people running forward to get a cd, it was one of the best performances of the festival. 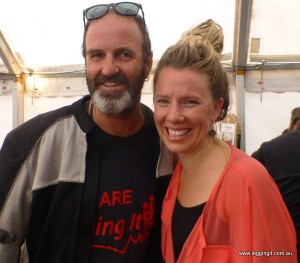 Søren Krogh a local danish singer followed Toby. From what we could understand he was touted as a one hit wonder but he was coming back with “its better than being a no hit wonder “wished we understood Danish because he had a good sound and a good sense of humour. We listened to a few songs and headed back to the other stage where The White Albumn, a local Danish band, were playing and sounded pretty good with a little heavier sound.

Pretty soon it was 7 pm so we headed to the Culture and Leisure centre where three bands we’d bought tickets for were playing. The first band was a Danish band Habadekuk who played traditional Danish instrumental tunes. They were pretty lively and had the locals square dancing in front of the stage it was so cool. Next up was People Club who were also Danish. They only played three chords and every song sounded the same to us. We had to take a break (we’ve been told since that their lyrics are really edgy so that’s why they’re so popular)

Last up was Santiano a German band playing German/English seafaring style songs. They really put on a great show with raspy guttural voices, great harmonies, and just having fun onstage. They had fireworks going off and it was one of the best shows we’ve ever seen. They played through until 130 in the morning and by this stage our hands were just pieces of raw meat because we’d clapped so much. 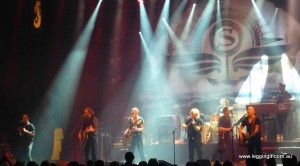 We coasted up to the cottage falling into bed about 2ish as the sun was setting (how crazy are these days of 21hours of sunlight).

Tomorrow more bands if our hands can stand it.