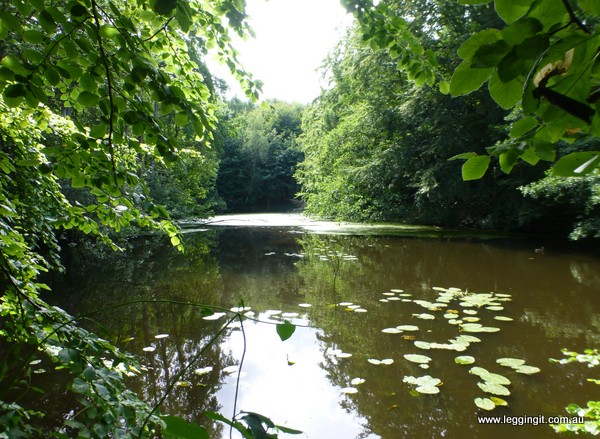 We couch-surfed for a few days in Helsingor which is about 40 kms away from Copenhagen. We arrived late in the afternoon and met our hosts, pretty soon we were like old friends. Our hosts were motorcycle nuts too and it was really cool hearing their stories of some of the rides they’d gone on through Europe. We were lucky enough to be taken on a ride by them. They have a Honda Transalp and ride double up like us, so it was interesting seeing their riding positions, navman, pannier and rear carrier setup. The ride was really nice through lots of farmland of wheat, corn, hayfields and forests of all sorts of timber. The ride took us through little villages with the traditional white plastered long houses with thatched roofs and wooden crosses holding the ridge cap down. The day was nice and sunny and every man and his dog were out trimming the hedges (Danes love hedges so much they even have little hedges around their graves) We almost sent one to an early grave who was standing on the road happily trimming his hedge on a blind corner. Our first stop was an old lighthouse. There’d been a lighthouse or a signal station there for hundreds of years. In the early times it was a steel basket filled with burning logs which was raised on a swing arm to warn ships of possible danger. Eventually it was replaced by a lighthouse which changed over the years with technology until its present electrical powered light. It had stunning views all the way across t Sweden and was surrounded by a wild rose which had the most beautiful scent. After a brief stop we rolled down to the local beach where we enjoyed a local Danish Is (Danish soft serve is a little creamier than what we’re used to and they don’t know what small is) I think large is when you just lay under the tap and they just pour it into your mouth.lol The beach was quite nice with a boardwalk from the carpark almost to the waters edge. The lifesavers were having a big cleanup campaign, with big signs, character cut outs where we took our photo, and ins situated every 50 meters. We were a bit puzzled but one of the local lifesavers told us that litter was a major problem at the beaches and they were trying to re-educate people to do the right thing. The interesting thing was they researched beach users and nobody leaves rubbish… The water felt pretty cool but he assured us it was about 18 degrees. Returning to our bikes we headed through the back lanes checking out some of the original houses before riding away from the coast and back into the timbered country. In the area we were riding was an old firearm factory which had a few man made lakes which were used to power the waterwheel. These days it’s a coffee house but the waterwheel is still there, in fact being renovated although our chippy mate was pointing some of the flaws in the workmanship. Inside the old mill there was a nice collection of flintlocks rifles, pistols and a nice little hunting rifle from the late 1800’s. It was a nice place to take a break overlooking the man made lakes and there were a few bush walks through the forests nearby. We took the shortcut via the gravel road on the way home because it had some really nice scenery. Helsingor’s main claim to fame actually is it’s the home of Hamlets castle, Kronborg (Elsinore of Shakespeare fame.) It’s a beautiful castle not far from the ferry terminal so we took a ride down to check it out. Hamlets family fell on hard times so they sold everything of value inside the castle, but these days it’s owned by the Danish Government and they’ve been busy repairing the outside. The castle’s protected by a moat and the sea (and of course CCTV and a heap of security guards) Docked nearby to the castle was Noah’s Ark a floating Christian Museum currently touring Scandinavia. Boy did we get a shock as we rounded the corner and saw this huge wooden boat tied up at the wharf, we were still looking in wonder when we met up with a nice couple from Wales. They were touring Denmark towing a caravan and had popped into Helsingor to check out the castle. It was pretty cool having a chat and finding out about their tour we might pop in and say gidday when we get to Wales. Helsingor has a nice little village area not far from the docks which is mostly pedestrian only areas with lots of little shops, cafe’s, bars, and cobbled streets. We still find it amazing as we passed houses with dates from before 1770. Also outside the old train station are the statues of Hamlet and Ophelia jus in case anyone was wondering who these characters in funny clothes were. Tomorrow we’re off to Copenhagen to check out the little Mermaid.