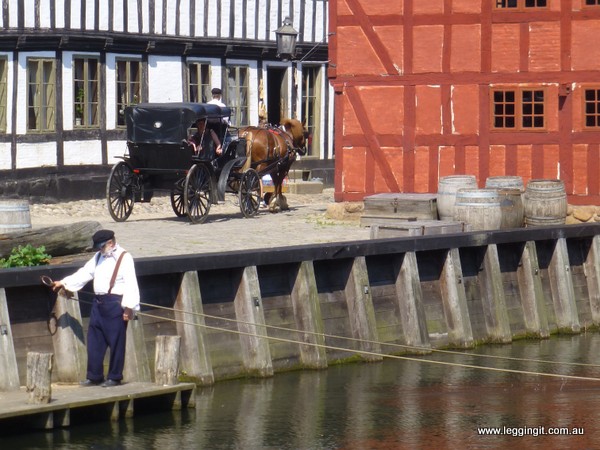 A quick run down on the our travels from Aarhus, Aalborg and Gothenburg…museums, beaches and ferries.

After our breakfast at the hostel we wandered down to see the town, it was quite nice with lots of potted flowers and some interesting statues

We then headed off to visit The Old Town. It’s an open-air town museum located in the Aarhus Botanical Gardens and quite centrally located in Aarhus. The site consists of 75 historical buildings collected from 20 townships from all over the country and the museum boasts that it’s the first of its kind opening way back in 1914. The museum is split into three areas covering the 1770’s, 1870’s and 1970’s with buildings reflecting each period in time but some buildings date back to the 1550’s.

We arrived a little early and the crowds were already building and also lots of smiling kids taking part in the holiday program.

We started our visit by going back to the swinging 1970’s. the street replicated a local street complete with shops filled with 70’s products, hair stylists, record shop and an apartment block complete with a Fiat 500 Bambino parked out front. The apartment block housed a gynaecologists surgery, a female school principals apartment, a family apartment and a commune. The apartments were all furnished with typical 70’s furniture and the interactive displays told of life for the different people. The hippie apartment intrigued us with beer crate furniture, and a record collection which wouldn’t look out of place at home. The original housemates told their stories of how they lived and it was really interesting getting an insight into communal living. We chatted for a while to one of the staff members about life in the 70’s. He told us of how one of the girls from the commune had travelled across China, which having done that ourselves we imagined how hard it would have been as a single girl in the 70’s.

The other apartments had furniture, toys and items we recognised from growing up. Quite often we pointed to something, smiled and said “I remember these” as a memory of childhood came rushing back.

Our next stop was the 1870’s where once again we saw some of the smiling kids we’d seen at the entrance. Now they were no longer smiling as they were part of the fun holiday program. “Go to the 1870’s Holiday Program they say” “It’ll be fun they say” They were now all dressed in period costume. The boys with yolks carrying buckets filled with water across the cobbled streets. The girls learning how to scrub and wash clothes and looked thrilled.

The buildings of this part of the town flanked a small stream where a boatman pulled visitors across. The houses were mainly half-timbered like Tudor style and were set up to display different roles from customs offices, schools, photographers, post office, milliners, weavers, grocers and blacksmiths. There was a mansion overlooking the market square which had models of how mansion had transformed over the hundreds of years of its existence.


Around the square and through the town horse drawn carriages carried smiling tourists over the cobblestone streets adding to the scene of yesteryear.
Nearby the square was an exhibition of Aarhus music through the years. In some ways it was similar to the way Australian music industry developed with local people singing covers of American and English songs until finally home grown music took off. The majority of the artists were unknown by us but it was interesting seeing which international artists had played in Aarhus. There was an interactive recording studio where you could record a cover of a local song which would be emailed to you. We sang a song but we’re waiting for a full catalogue before releasing an album.

We continued on through the 1770’s and it was interesting how many of the items and utensils used in the houses are exactly the same as those used in early Australian houses. The gardens were also an interesting feature with the plants which were grown during those periods of time and also a hothouse housing plants which at that time were really exotic.

Overall it was a fun day and well worth a visit with enough still left to see to warrant a return visit.

The weather was fabulous as we headed north from Aarhus heading along the west coast of Denmark. We stopped off at a small beachside village for lunch and Michele went in search of Amber on the beach, a local Danish pastime. She returned about 30 minutes later beaming with a handful of rocks (sorry to burst her bubble) All the locals were out catching a tan and we took advantage of the sunny weather by arranging our washing to dry on the bike. After lunch we gathered up all our dry washing and continued north. The ride was quite mesmerising until a police car with siren blaring jogged me from enjoying the countryside as it zoomed past. After that it was mind back on the business of getting to Aalborg.

We Couchsurfed with a young russian guy studying Italian at a Danish University in Aalborg. It was an awesome experience. We spent most of the night talking and hearing tales of some of his trips hitch hiking Europe, central Asia, Afghanistan. An amazing young man and in his words “Mamma Mia” some of the places.

The next morning we were up way too early packing the bike for the run up to Fredrikshaven for the ferry. It was a straight run of mainly freeways and we arrived quite early finding a seat, cafe, toilet next to where we parked in the queue. We chatted to some local bikers heading across to Sweden. One was planning to be in Stockholm by the end of the day which meant he would’ve had to be travelling pretty fast to get there. The other heading north to Norway.

It’s interesting how many more bikers are on the ferries. obviously the warm weather is bringing them out.

It was a nice trip across and soon we were heading to our couchsurf. Friends we’d stayed with last time in town who greeted us with a Danish Barbeque. How cool.