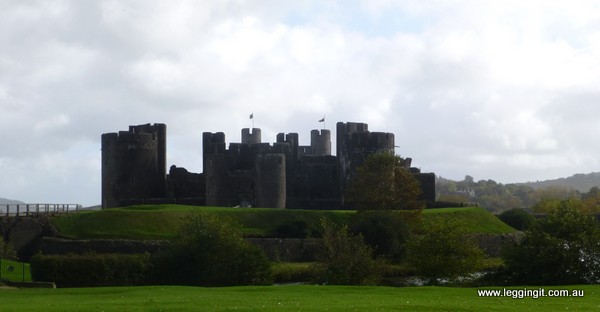 Today we leave Wales and head for Bristol, with the plan to visit Caerphilly Castle, and do the ride from Monmouth to Chepstow. The weather was a little cloudy as we headed out of Cardiff and up over Hawkshill to Caerphilly.

The views of the Welsh countryside from Hawkshill was really beautiful and it was a nice ride down into Caerphilly. It’s hard to miss Caerphilly Castle as it is the second biggest castle in Britain. It covers about 30 acres, so it absolutely dominates the town centre, with massive walls with round turrets rising out of the lakes which surround it. We took a walk around the lakes surrounding the castle and had a bit of a chuckle at the groups of people fishing next to the “no fishing signs”.

The castle dates from the 13th century and was a model of defence for other castles, surviving various welsh attacks over the years. By the 15th century however it had fallen into disrepair but the Marquesses of Bute, who seems to pop up wherever we go, bought the ruin in the late 18th century and along with successive marquesses carried out some extensive restoration. The castle was given to the state in 1950 and now the property is run by Welsh heritage. There’s been some subsidence over the years and some of the outer walls are leaning a bit and the North East Tower has broken away from the inner wall and is leaning at a crazy angle. It has quite interesting to see what they’ve done to prevent it falling any further. They’ve propped the wall using a human shaped prop, so it looks like someone’s holding the tower up.

The rain started falling so we headed off towards Newport. Surprisingly the weather cleared to a bright clear day and we took a spin around Newport, and were surprised how big it was.

Our next stop was Monmouth where we stopped for lunch and had a chat to a bloke called Roger from Gloucester on a Hayabusa, who’d taken part in the big ride with the HOG with over 1,000 bikes but now had lost his father and was looking for him but he wasn’t answering his phone. One of those great joys about riding your bike is the inability of others to call you. We had a chat for ages but his father didn’t turn up, he probably headed up to the HOG rally. All along the way up there were bikes heading in all directions so we couldn’t say we saw him or not. It’s funny how when we arrived two Harley’s and their riders were parked where we stopped and didn’t even bother to even say hello, just the usual “too cool for school” look.

It was lunch time so we headed over to the Monnow Bridge Hotel where we enjoyed a Sunday roast, which was really nice and becoming a Sunday tradition for us. The pub had a really nice atmosphere and pleasant staff.

The Monnow Bridge, which is just outside the pub is the only surviving Gate Bridge in Britain and just over the bridge a nice tiled display tells the history of Monmouth.

On the far side of the bridge is the little church of St Thomas the Martyr, a quaint little red sandstone church dating back to 1180. The church has a bit of history as it was burnt, along with the bridge, during the Battle of Monmouth uprisings against Henry III. These days it’s a nice quiet place for reflection away from the bus loads of people who flock to the town.

We took a ride from Monmouth up to Chepstow along the A466 man what a great ride. Along the way we passed so many bikes we stopped counting at 100. The road follows the River Wye winding along through tree lined hills before opening up into the valley floor. The road crosses the river before slowly climbing up the hillside passing the picturesque villages of Llandogo, and Tintern where there’s an old mill house a few nice pubs and the ruins of Tintern Abbey. The ride up had great views of the river and all the hills with beautiful autumn colours. It also had some great winding roads and it’s easy to see why it’s so popular with riders. The road led us up to St Arvans and the Chepstow Racecourse where the Harley Owners Group were hosting their run. There were Harley’s everywhere and lots of other bikes.
The ride back down was almost as good with no traffic just enjoying the ride, we even took a detour to check out a place called Mork.

When we arrived back in Monmouth we stopped up near the Shire Hall and checked out the monument to Charles S Rolls, the famous car maker and aviator. He was credited by being the first person to fly across the English Channel both ways non stop. Unfortunately he was the first person to be killed in a plane crash when the tail fell off his Wright flyer and he crashed. Nearby we stopped at Henry’s cafe for a cuppa and a chat. It was a nice cafe which also had lots of art, craft and nick-nacks for sale.

Chrissie (our satnav) decided to take the scenic route to Bristol so headed towards Gloucester before heading south taking all the little B roads though beautiful farm country with lots of traditional English houses dating back through the centuries.

Arriving in Bristol we found our couchsurf and met our hosts, wonderful couple from Spain and Italy. We all headed out for tea at a local bar spent the rest of the night chatting.

Tomorrow we check out Bristol and hopefully a bit of Banksie’s art.