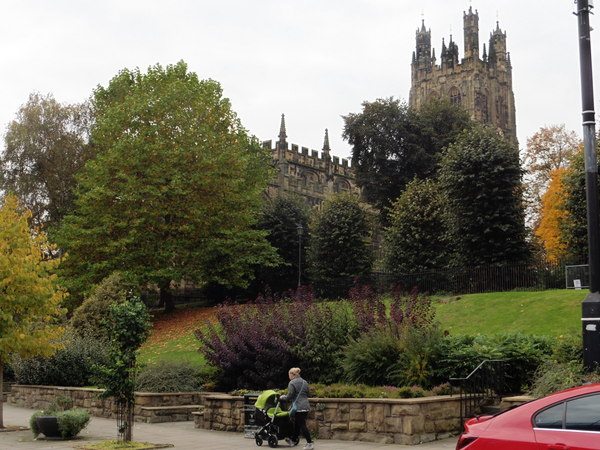 Today it was a bit gloomy as we took a ride into Wrexham. 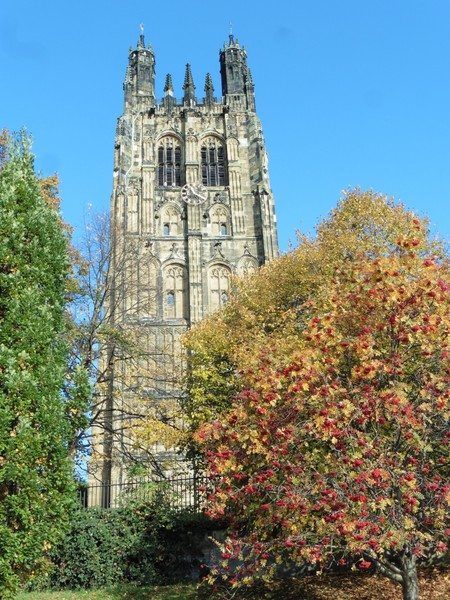 Our first stop was St Giles Wrexham Church. The current church was built around the 14th century probably over the earlier existing church of St Silin. The church was rebuilt in the late 15th century after the spire fell down destroying much of the church. It was rebuilt again after a fire in the 16th century.
Thomas, Lord Stanley and his wife Lady Margaret Beaufort (the mother of King Henry VII) paid for the renovations and were depicted as figures on a pair of corbels. Thomas must’ve upset one of the builders because he was depicted with a crown and donkeys ears. 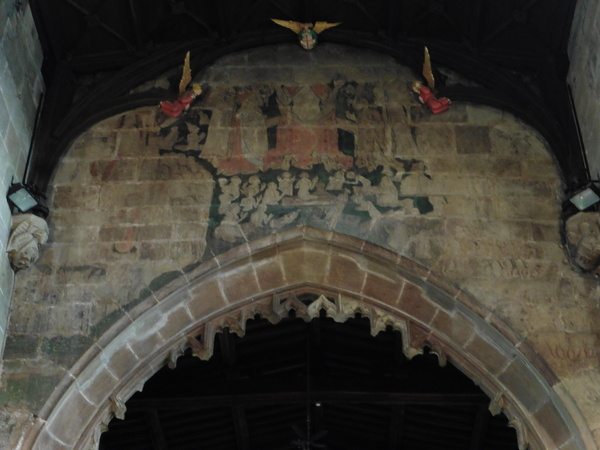 One of the features of the church is the Doom painting over the east arch. Dating from the renovation it shows figures rising up from coffins on the day of judgement. During the renovation the nave ceiling was raised. The old corbels which supported the original roof beams are mid way up wall. The earlier church must’ve been a little darker with smaller windows and a lower ceiling. 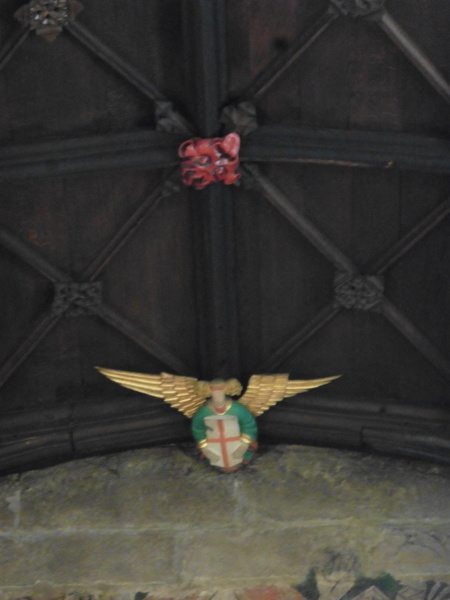 Around the ceiling are angels playing musical instruments and looking closely there’s also a red face of the devil. 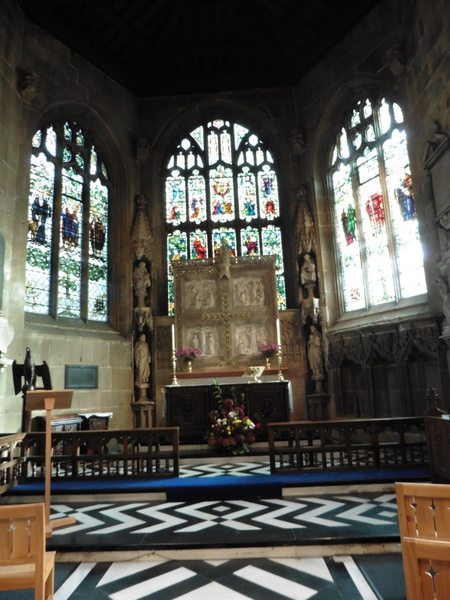 The church was running a market day when we visited. Between the aisles stalls had been set up selling cakes, sweets, jewellery, crafts, clothes, and christmas cards. The church ladies were also selling tea, cakes and goodies from the kitchen. It was really nice to find a church which really felt alive.

Walking through Wrexham we spotted some lovely Tudor style buildings in the town centre and a few older buildings with character. Wrexham seems like a nice town but it’s hard to get enthusiastic about a town where it seems the biggest industry is pawn shops. 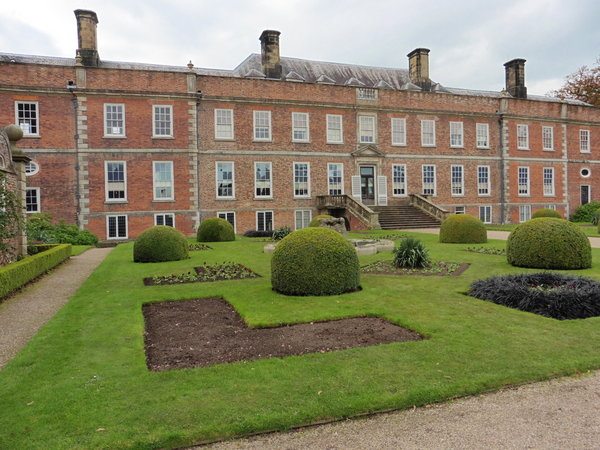 Not far from Wrexham is Erddig Hall, a National Trust property. It was built in 1684 for Josiah Edisbury, the High Sheriff of Denbighshire. However, Josiah over stretched his finances and before the house was finished, so was he. Bankrupted before its completion lawyer, head of the chancery John Meller bought Josiahs debts and Erddig in 1714. John Meller furnished the house with the finest furniture and added two wings. 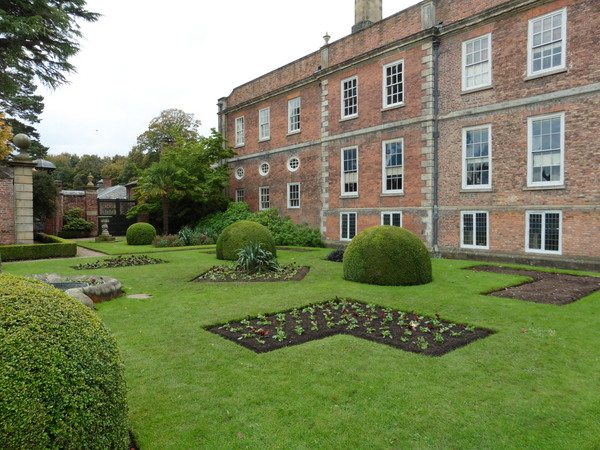 It seems strange that he’d want such a large house as he was unmarried and childless. When John died in 1733 Erddig was inherited by his nephew, Simon Yorke. For the next 240 years it was to remain in the Yorke family. By strange coincidence all of the Yorkes who inherited the house were named Phillip or Simon. Their fortunes waxed and waned but unlike other families they kept the furniture and estate intact living well within their means.
The Yorke dynasty came to an end with Phillip Yorke III who transferred the house to The National Trust in 1973. He had inherited it from his brother Simon Yorke IV who’d died without any heirs. Simon had inherited the house in 1922 at the age of 19. The estate was cash strapped and with the financial crisis taking place throughout the world it was tough times. Simon lived as frugally as possible becoming a bit of a hermit. As it would’ve been expensive to convert the house to electricity he simply didn’t get it connected. He also lived without a telephone. Due to no money being spent on the house it deteriorated. Added to this subsidence from the collapse of a shaft from a coal mine under the house almost destroyed the house. 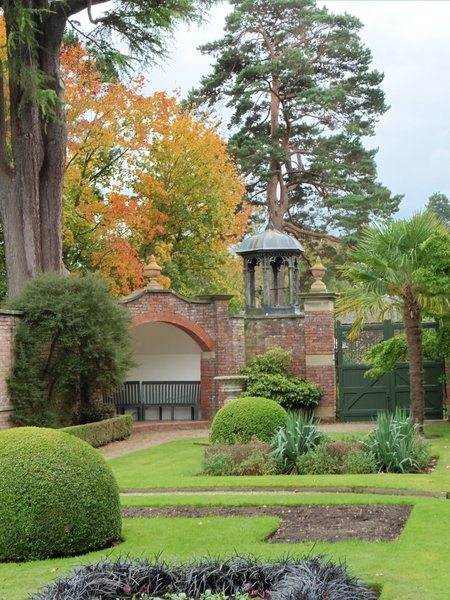 After the National Trust took ownership of Erddig they claimed compensation of £120,000 from the National Coal Board. They also sold off 63 acres on the edge of the property and raised a further £995,000. Together these two sums paid for the house to be underpinned and restored to some of its former glory.

The Yorkes had a high regard for servants and throughout the hallways of the lower floor of the house the hallways and rooms are filled with paintings of staff, photographs, and poems. The Yorkes were an artistic family and the tradition of writing poems about different servants dated back to the late 1700’s. It was a fascinating insight into the often forgotten people who lived and worked on the estate.
Currently the National Trust have a display on renovation techniques and conservation. We were lucky to talk to one of the staff who guided us through some of the work which goes into keeping the furnishings in good shape. It was fascinating seeing the insect traps and the tiny insects which cause so much damage. 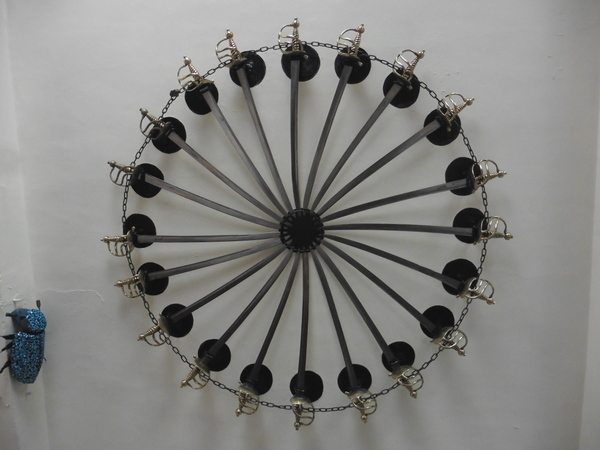 Light is also monitored in the house and there’s an allowance of how much light can be used in the house per year. It’s something that we’ve never really thought about. (hence the lack of inside photos)
The house has quite an extensive collection of furniture dating back 300 years. The furniture that was purchased by John Mellor was such high quality that much of it is still intact. However, 300 years of use certainly took its toll on the furniture and National Trust has been busy restoring it since taking possession of the house. As the Yorke family had varying fortunes they never had the money to waste by throwing things away. One of the finest pieces of furniture is the State Bedroom. A truly magnificent bedroom is sealed behind perspex and monitored to preserve it for the future. 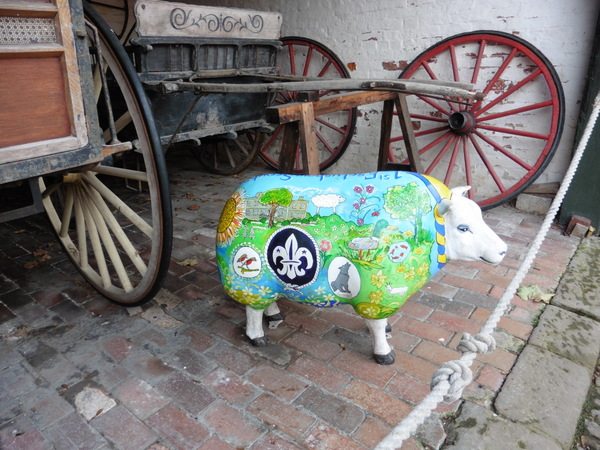 One story goes is that the last owner of the house lived in fear of burglary. He lived in the house by himself on the upper floor amongst all the valuable furniture. To protect himself he stacked tin cans at the doorways and slept with a shotgun.

Erddig is one of the best examples of 18th century style gardens although at this time of year the onset of autumn has knocked the trees about.

Erddig really was a magnificent house with an interesting snippet of the life beneath the stairs. The state room furniture and Chinese silk wallpaper is just exquisite.
As we were wandering brought the gardens the Welsh clouds started closing in signalling it was time for us to head for home. Tomorrow we may check out nearby Attingham Park, another National Trust property.

Entry for Erddig Hall is £5.20 (free for National Trust Members) more information can be found here