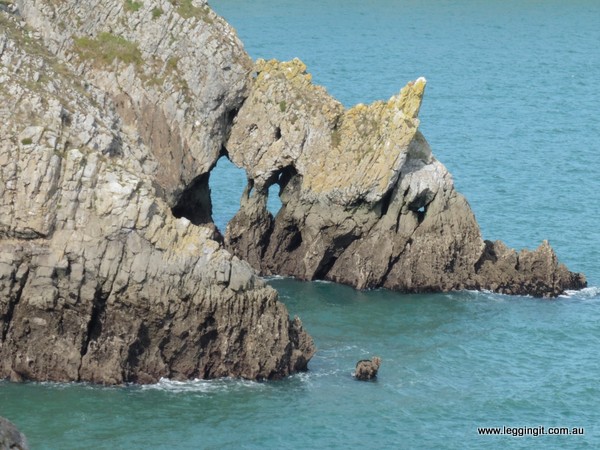 Surprisingly the sun was beaming as we headed off to Stackpole to check out the National Trust estate. The trip down from Tenby was pretty good as the welsh roads we’ve travelled on have been excellent. However the signposting at times is pretty challenging. Some of the little villages have imposing churches which date back hundreds of years, this is why we ride to take in the things you often miss in a car.

We started our visit at Stackpole Quay, a fancy name for a coastal boat ramp and boatshed. The National Trust guide at the carpark was excellent pointing out the best routes and spots to visit, including Barafundle beach (voted in the top ten beaches by National Geographic) .

After lunch of freshly caught Welsh Rarebit( a fancy name for Cheese on Toast lol), we headed off to check out the beach. The walk gave us the most spectacular views with red sandstone cliffs to the left along the coast and limestone further along to the right towards Broadhaven. It was just breath-taking almost overwhelmingly so.

In the middle along the coast was some spectacular grey block formations formed when the land mass collided. The sea has carved out caves and in some places sink holes have formed at the top. It’s a fairly steep walk down to Barafundle beach and in reminded us of some of the beaches south of Sydney which are situated in little bays between sheer cliffs. The beach is quite wide also, running up to dunes before the track leads up to coastal woodland.

So was it one of the best beached we had seen, you betcha… with cliffs on either side it gave you a feeling of isolation from the world, the cliff formations were so beautifully formed you could not help but stare at it. So yes a well deserved award.

We continued along the coast checking out Lorts Cave, Griffith Lort’s Hole, Stackpole Head, Mowingword, Raming Hole and Church Rock before we headed back through the woodland to a clearing containing The Devils Quoit, a standing stone in a field. The Standing Stone is only about 1.5 metres tall but with lots of orange and white lichen is quite striking. It stands on the site of an earlier structure that burnt down. Bronze Age people thought it significant enough to inter the cremated remains of their loved ones around it and there’s a sign warning fossickers with metal detectors that the site is protected by law but there was evidence that someone had been digging nearby. It seems that some people have no respect of monuments. Not far from the stone circle are the remains of huts from around the period of the Roman invasion.

We returned across the fields to meet up with the guide and we had a good long chat and he pointed out the important areas around the estate and possible places where we may be able to see otters.

We rode over to Stackpole Court across the One Arch bridge and took a walk around the grounds. Stackpole Court was the former residence of The Campbell’s of Cawdor who over the centuries built it up into a huge stately mansion. The local Campbell lord was famous in 1797 for leading the Castle Martin Yeomanry to Fishguard where they captured 1200 French Sailors, which they proudly state on the local pub in Fishguard. That was the last invasion of British soil. The starving French prisoners got some of their own back on John Campbell for as he was enjoying a celebratory dinner they caught and ate his horse.

During the 18th and 19th century the mansion was at its finest with local tenants paying rents but as it got older it need more repairs. In the 20th century it was commandeered by Army during the war years and the estate of course couldn’t make money to support its upkeep so by the 1960’s it was in a poor state. The Earl of Cawdor found it was too expensive to repair so proposed to reduce the size of the mansion to its original size but was blocked by the council. In the end he simply demolished the place and sold the rubble to make the foundations of the Milford Haven oil refinery.

Nature has reclaimed a bit of the river below the Hidden bridge with all sorts of water plants which is the haven for some of the waterfowl which live there but there’s a good stretch of water in front of the bird hide which is open up to and past the Eight Arch bridge (these names aren’t very imaginative). We found a seat in the hide and watched the swans, including two which were performing a mating ritual which was quite amazing. The otters didn’t appear whilst we waited so as it was getting late we headed home to feed Mooshi.