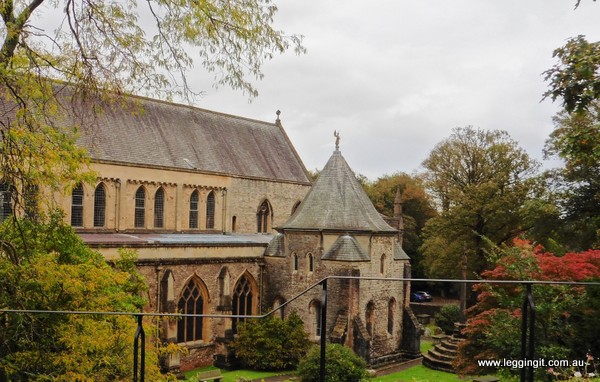 Today we planned to check out Landaff Cathedral which according to the map is only a mile away from Steve and Sarah’s house. We set off walking and after a mile discovered we should’ve gone left instead of right as we were taking the long way. A lady pointed us in the right direction with a “it’s just through the village at the top of the hill on the right”. Well she must’ve been laughing all afternoon about the tourists she sent on a wild goose chase.

Eventually we found the cathedral near a quite moving monument to the local men who had gone to war. A motherly figure was flanked on one side by a young man in shorts and long socks which gave the impression of the young boys who joined up straight from school and on the other side a young man in simple working clothes. It reminded us of how many young lives are wasted in the wars. 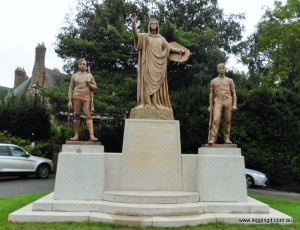 The Cathedral was further down the hill and opening a simple wooden door entered it descended down into it, just like the church of St John yesterday. The Cathedral has the most imposing sculpture of Jesus in the middle of it set into the top of the old ancient church arches. The Welsh Regiment has a chapel on the side and it was interesting reading all the names of the battles that Welsh Regiments have been involved in from wars against the Scots, the War of Independence, to Africa and European wars spanning hundreds and hundreds of years.

It also was interesting reading the history of the Cathedral which during the war had suffered extensive damage when a German parachute mine had exploded next to it. The cathedral had remained a ruin until money was raised for its repair after the war. The current state of it is a real credit to the community who raised the money to repair it also the men and women who did a marvellous job to restore it.

As we returned to the top of the hill we found the shortcut past the remains of an old clock tower and further down past walled gates. This part of the city has lots of schools, colleges and universities so was quite rich and also quite vibrant.
On the way back to the B&B we took a break at Jasper’s Cafe where we enjoyed great service, coffees and the most astounding chocolate roulade. Ron sat in a preachers chair, with a high back and lectern, which is said that it may have been used by John Wesley. Filled to the brim on chocolate cake we took the shortcut home and were surprised the amount of extra walking we’d done to get to the Cathedral.

Once back at the Steve and Sarah’s we jumped on the bike and headed for Roath, for Made in Roath an annual arts festive. We were expecting a street parade hen we read ‘street festival’ however it was nothing like it. A small side street had a dozen or so stalls with things like organic food and Indian food. There was caravan with a writer busily tapping away at the keys, the concept was that writers would spend a couple of hours in the space to help them write. The young man, Mark Lowes, had excerpts from his latest book hanging on the door as a taster for people to read and he is hoping to release soon so keep an eye out for him.

There was also a potter building a pot by brushing clay onto her receipts and then squashing them to build up the pot. It was an interesting concept and it was fascinating talking to her. She had saved all her receipts for the last year and the pot will be valued at how much she has spent.

The Roath festival had about 90 odd different shows, art displays and events throughout Roath. We picked out a few things which interested us including the Once a Year some Traditional British Customs which was a series of photos taken by Homer Sykes in the 70’s of different festivals like Mummers Paper Boys, May Pole dancing and others. There wasn’t as many photos as expected but it was still interesting and we wondered if many or any are still going. If you look here you can see some of the amazing mages he took during that period.

The Albany Park Primary school had been a hospital during the First World War and as part of the festival the year six had been studying it and had put on a display for the public. All the students had dressed as casualties or nurses and when we entered the building a few boys volunteered to be our guides. The boys showed us around the classrooms showing us what they’d been studying, including some of the projects on the war which they’d completed. They also took us on a grand tour of the school pointing out where the walls of the hospital wards had been, where former buildings had been and the uses of the buildings. It was wonderful to see the enthusiasm of the students and how they had embraced their learning. Then it was back to the main hall where the children sang old war songs such as “it’s a long way to Tipperary” and “pack up your troubles in your old kitbag”. It was a tremendous effort by the school and the children were a credit to their school.

Another event which had caught our eye was the Rapper Sword Dancing demonstration and workshop by Taff Rapper. We’d first seen Rapper Sword Dancing at the Whitby Folk Festival earlier in our trip when a group called the Mabel’s had amazed us. The group had a demonstration and tutorial session however we settled for the demonstration. The basics of Rapper sword dance is five people with a flexible sword with a handle on both ends “the rapper”. The group twist and turn interlacing the swords which are held over their heads, forming different patterns. The group hadn’t been going for long but judging by the way they spun from one movement to the next you wouldn’t pick it. The two handled knives clashed as they changed direction with the swords buckling and bending forming one shape then another. One dancer even somersaulted over the knives, it was spectacular. Now you may be thinking “big deal” but at the same time as they’re twisting and turning they’re also tap dancing. The dance leader told us a little of the history of folk dancing in the UK and we learnt about Morris, Jill’s, clog dancing, Long Sword dancing, Molly dancing and lots of other types of dancing. It was so fascinating and it was encouraging that young people are still doing it. Their website is here if you want to see more.

All in all it was an awesome day full of variety. If you are in Cardiff around mid October check out the Made in Roath website here and see what is on

As the weather was fairly good we decided to check out the Cardiff Quay. The quay area has been developed in recent years into the entertainment area of Cardiff. There’s all sorts of cafe’s and restaurants offering quite a vast array of foods. The old red Welsh Assembly building is located nearby to the new assembly building, and the old Norwegian Church now houses a cafe. A sculpture to the merchant mariners who were killed in the war is quite moving with a face melding into the bows of a boat. There’s other sculptures including a tree (which is a tree mustn’t have taken much thought in that one)

We stopped for tea at Salt, a popular spot which was quite lively with birthday parties, and hens nights (with everyone wearing a sash proudly stating their relationship with the bride). The service was really good with friendly efficient staff however the food was a little disappointing. I always think that presentation is a major part of making food appetising. After reheating the curry and rice someone should have stirred the curry to make it look presentable, it’s the little things that make the difference.

As it was almost dark we headed back to home, where with good intentions we planned to head out to another festival event but once we took our boots off that was it for us for the night.

Tomorrow we head to Bristol for a few days.