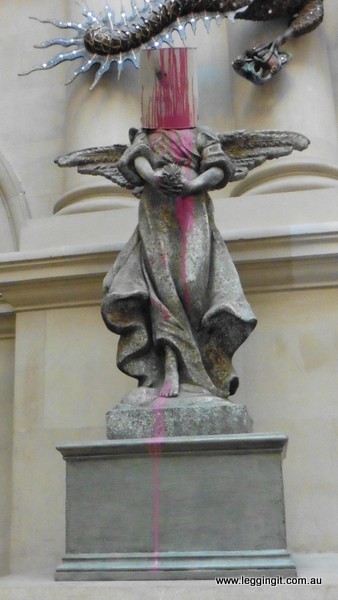 One of the main reasons for coming to Bristol was to see some of Banksy’s Art. Michele is a bit of a fan of his social comment what we didn’t realise was how much of a vibrant street art scene existed there. It was a pleasant surprise.

We started the day sharing breakfast with Tom and Noe… coffee and avocado on toast yummo. Tom had to head to work and Noe had some study to do so we all headed into town.

We said our goodbyes at Temple Mead Station, a really grand station which looks like a cathedral with it’s large windows. The weather was a little drizzly as we walked along the river discovering a nice looking curved bridge and a cafe in a Yurt. Yurt Lush was definitely not what we were expecting in the middle of Bristol.

We wandered through the city and found the Nicholas Markets where we bought an umbrella which came in handy throughout the day as Ron had decided he did not need his coat… The inner city is a mix of cultures reflecting the current status as a university city, with lots of young people adding the vibrance. There’s all sorts of food on offer from all over the world, we stopped at a Spanish cafe for coffee and later at a West Indian restaurant for lunch.

Bristol is a historic trading port where many merchants made their fortunes. These days the central docks are quiet, with a few old historic boats from different periods of time tied up. There’s a replica of the Mathew, John Cabot’s (Giovanni Caboto) boat which he sailed from Bristol to Newfoundland, North America in 1497 to claim the land for England, and back to Bristol. Surprisingly the Mathew was quite small at 50 tons, so sailing across the North Atlantic was a major feat.

We enjoyed a walk around the harbour where they have a lot of old ships on display.

There were a few churches we liked the look of including Bristol Cathedral which had the most beautiful vaulted ceilings, unlike any we’ve seen elsewhere and high gothic windows giving the interior a sense of space. The cathedral is absolutely stunning and we spent a fair bit of time wandering around and taking it all in.

Also of interest was the St Thomas the Martyr Church, which was connected with the well known slavery abolitionist, Reverend Thomas Clarkson, who would visit the Seven Stars Pub next door to gain information from sailors and compile it all to help with the abolition movement.

The church was supported by the rich merchants of the area but over the years the congregation declined and these days the church is managed by the Church Conservation Fund. The church is Georgian in design with a beautifully whitewashed interior and a few 18th century paintings making it a nice place to take a break from the hustle and bustle of the city.

We caught up with Noe and went for an art discovery walk around the city to discover the famous street artist Banksy’s art. The trip took us to the Bristol Museum where we checked out the Banksy which is basically an stone angel with a paint pot on its head, hmmm interesting. It symbolise turning art on it’s head and was part of an exhibition he held there a few years ago. Whilst there we also checked out their Egyptian displays and it was interesting how they’ve used interactive displays to discuss the ethics of displaying skeletons etc in museums.

Back on our walk, over the university hill and on the way back down we passed alms cottages. Alms cottages were built to house poor people and were usually gifts from merchants to the community. However, many are the benefactors effort to buy their way into heaven. With not much effort( google Mr Google know everything) we found that this benefactor was a rich merchant who made his money through slavery as Bristol was part of the slave triangle. Slaves were sent from Africa to the Americas and cotton, sugar, tobacco, rum, rice were brought to Bristol and then manufactured goods were taken to Africa to trade for slaves.

Our art trail took us to Montpelier which had a bit of a bad rap as it was a tough suburb, with lots of unemployment, just your typical inner city low socio-economic area. There’s lots of graffiti art everywhere some of which is awesome and unfortunately lots of tagging which is not. Some of the businesses have embraced the graffiti art in their logos and it reflects the change in the community. The local community centre was a great indicator of the changing face of the community with people from all over the world sitting and chatting.

The walk back home was pretty hard going, but we enjoyed a meal of nachos before chatting until quite late.

Tomorrow we head off to Devon, but the weather report is telling us to expect high winds as the tail of a hurricane sweeps through.