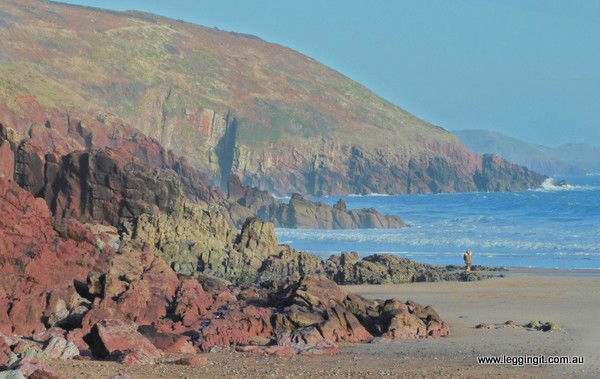 Yesterday was our final day housesitting in Tenby so we spent the morning packing the bike, cleaning the house and washing linen. Mooshi Mooshi the lord of the manor made a few brief appearances to eat before catching up on his sleep. Our hosts arrived home early all tanned and looking relaxed. They were excited to be home and it was great hearing all about their holiday.
After saying our goodbyes we headed out to Carew to get the Princess her new shoes…. The brakes had given up the ghost when we arrived in Tenby and we searched on the net and found a place not far away. The Satnav took us the wrong way and we ended up at the wreckers who pointed us towards the old airfield pavilion on the other side of the hedge. We backtracked a bit, arriving at West Wales Motor Cycles just on time.

Straight away the bike was put up on the bike lift as they started work on the rear brake and we were given a cuppa tea. This was the first bike shop we’ve been in since we’ve been travelling where we really felt comfortable. The staff were friendly and knew what they were doing and got on with it. Some of the shops we’ve been in on this trip make you feel like its an inconvenience to get work done or even serve you. The mechanic looked at our tyres and suggested we should look at replacing them very soon, not trying to put the squeeze on to sell us some tyres but giving us some good advice. We’ve been hanging out to get the tyres replaced, trying to squeeze every last kilometre out of them and then a few more. Our plan was to get them replaced during our next housesit in a weeks time so after a brief family conference we decided that we’d ask them to order in replacement tyres and were surprised at the reasonable prices.

The bike was ready by the time we’d finished our cuppas so we headed off to Burry Port to our B&B and it was so reassuring to have a rear brake again. Burry Port probably isn’t on any tourist maps and its claim to fame is it’s a former coal port where industry has moved on and it’s also where Emelia Earhart came ashore in her seaplane after crossing the Atlantic. Like a lot of towns where industry has moved on it appears it is still trying to reinvent itself.

There’s a few pubs and Freehouses in town and some have some cool nautical names like The Coastal Pilot, and the Ship Aground Inn. Looking for a good place to eat our B&B hosts suggested we check out The Cornish Arms Hotel near the station. Well what a fabulous choice. They have a lunch special which runs from 12 noon until 8.30 pm. It’s basically 1/2 price meals with a good range on the menu. We enjoyed Grilled Lemon Sole and a cracking Steak and Ale Pie with a huge puff pastry on top. Then we discovered our new favourite dessert, Turkish Delight Cheesecake. It was a great night out, good food, friendly staff and reasonable prices. It’s easy to see why the place was packed and it’s a Tuesday night. We were so impressed we booked a table for tomorrow night.

Waking up the next morning our host greeted us with a full cooked breakfast, which took some walking off. As the morning was sort of fine we went for a walk around Burry Port. These days the former coal port houses a small boats marina, a Lifeboat Station and a few monuments to Emelia Earhart. We went for a walk around town and it was interesting for a little town with about 4,000 people there’s two butcher shops, two optometrists and what appears to be an unofficial caravan park. One road along the railway tracks had about ten caravans parked along the vacant land. Quite a strange sight in the middle of a town.

We headed back to Carew to get the new tyres but as we were leaving Burry Port the skies opened up. We had plans of stopping at the National Trust gardens but as there was no cafe decide to keep going.

Arriving at Carew Inn we parked the bike up and made our way into the pub. Firstly we sat out in the dining room but decided we didn’t really feel like a large lunch so decided to move into the bar and have a baguette. It was a great move because although the bar was small, it had a great atmosphere and a roaring fire. We were invited to join a couple at a small table and soon were chatting away. They were from Tenby and started telling us about some wonderful places nearby we should check out. We ordered a baguette each but probably could have just had one as they were huge and quite reasonably priced.

After lunch we got the message that the tyres were in so Ron took the bike up. Once again the staff at West Wales Motor Cycles were wonderful. The bike was straight up on the hoist and the wheels were taken off and replaced. Whilst the wheels were off they did an inspection of the brakes and wheel recess. Good news as the front discs are in good condition so with new rears and tyres we should be good for our trip to Spain.

Whilst Ron was away I met everyone in the little bar and it was so nice chatting to them. I was even offered a lift up to the bike shop as everyone was leaving and were worried I was there by myself.

Originally we had planned to visit Carew Castle but decided as the day was getting late to take a run down to the beach at Freshwater East instead.

The trip took us through some nice countryside and the beautiful little village of Lamphey. The beach was magnificent with a freshwater stream running across it (hence its name), some interesting rock formations, a bit of surf and a tiny little waterfall at one end. It was bordered at each end by cliffs and we were told that it was the sight of Dobbie’s shell cottage and burial in Harry Potter. The cottage had been left after the film until OH & S had it torn down as it was unsafe. The beach was lovely however to walk along and there were a few dog owners out exercising their dogs enjoying the last of the suns rays.

The run back to Burry Port wasn’t too bad despite taking one wrong turn and we headed straight to the Cornish Arms Hotel still in our motorcycle gear. The publican even remembered us from last night, but for the right reasons. This time we tried the chicken and veg pie and the cottage pie as we were both a little cold and wet. Once again the food was really good so we finished up with some more of their delicious Turkish Delight Cheesecake, what a fabulous dessert. Crispy base, smooth creamy cheesecake with that hit of Turkish delight, yummy.

It was a nice way to end the day. Tomorrow we head to Cardiff.