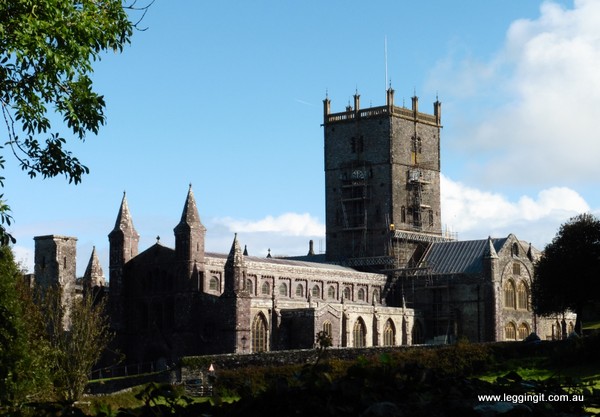 Taking advantage of a sunny day we rode out to visit St David’s Cathedral, another of the things on Michele’s list and we weren’t disappointed.

St David’s Cathedral is one of the holiest places in Britain with the body of St David, the patron Saint of Wales interred there. St David who died in 589 was the Abbott who founded the monastery. The Vikings and others raided the monastery over the next 500 years. King Alfred the Great the Anglo Saxon king from Wessex recognised its status when he used monks from there to rebuild Wessex intellectual life. William the Conquerer visited in 1081 to pray, which recognised it significance as a holy place.

In 1115, Bishop Bernard commenced construction of a new Cathedral which he requested that the Pope Calixtus II bestow a Papal privilege upon. The Pope decreeing “Two pilgrimages to St Davids is equal to one to Rome, and three pilgrimages to one to Jerusalem!”. So St David’s became the centre of pilgrimage for the western world. The Cathedral was quickly constructed and consecrated in 1131. Being a hub of pilgrimage was a good earner for the church who suddenly needed a larger Cathedral.
The present Cathedral was begun in 1181, and completed not long after but it has seen many problems such as the tower collapse in 1220 and then earthquake damage in 1247/48. During the reformation the cathedral was overlooked as Henry V11’s father Edmund Tudor was buried there. The most destruction faced in the church was actually good old Oliver Cromwell and his forces who almost destroyed it and at the same time stripped all the lead off the bishops palace.

For an 883 year old cathedral it got a little bit of history and its fascinating to read about it and learn a bit about the people involved.

As for the structure of St David’s Cathedral well there’s also questions as to the
foundations and as we wandered around inside it was quite evident. The cathedral is on a slant from the front to the back, in fact about a fourteen foot fall. Looking at the outer walls they’re not square to the inner walls and the inner walls bow out at the top. The ceiling unlike most cathedrals isn’t high vaulted but flat which is quite different. To help support the outer walls on the bottom side of the cathedral have flying buttresses. In one of the naves in the cathedral a small greenish black stone block set within a table is said to have been used by St David as an altar.

Whilst we were wandering about we met two Aussies from Perth and had a chat. They’re away from home for about 8 weeks travelling through Europe and England. We asked them a few spots to recommend which Michele entered onto her list of places to visit, before parting ways and wishing hem good luck on their trip.

The shrine to St David from 1000 years ago has been recreated within the centre section of the cathedral near to where Edmund Tudor is buried. Its similar to some of the shrines we saw in Orthodox churches in Russia.

One very disturbing thing we saw in the cathedral was graffiti. When we think about desecration of tombs we think of periods like the reformation when religious zealots tore everything down, but here some peanut who had left their mark on the world by scratching their initials on a tomb. The more we travel the more we are astounded at the way people and some from many years ago think this is ok. We even saw a woman in her fifties scratching her name in the Great Wall of China so it is not just the young.

One interesting point about the cathedral is the 10 bells are not actually in the tower but in the old gatehouse up the hill.

We took a break for lunch enjoying pasties and veggies before we made our way to the Bishops Palace.

At the rear of the cathedral is the ruins of the Bishops Palace which in its day must have been majestic judging by the size of it. The brochures invite us to imagine coloured light streaming through the window into the great hall as guests entered. The checkerboard stonework high on the walls, carved heads and mystical beasts indicate its former glory, as it was more than just a building but a statement about the bishop. It was built to entertain nobility in its great hall. Due to the size and beauty of the palace its obvious the power that at one time the bishop of St David exerted.

It was a great place to visit and we really enjoyed the ride both for the scenery and the sunshine.