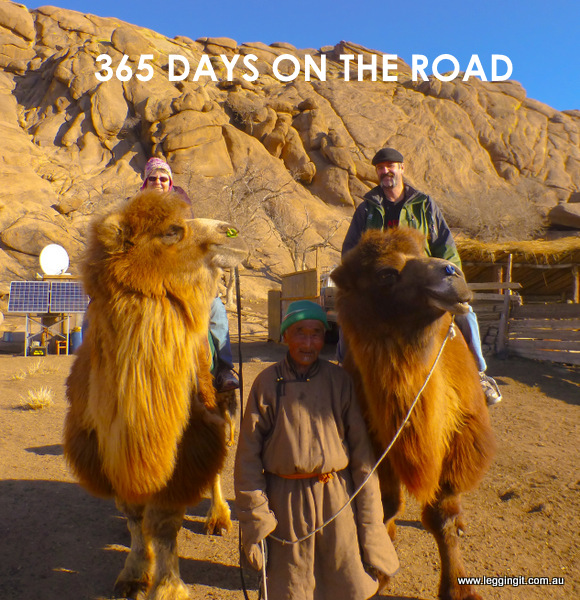 Well it’s 12 months since we started our journey. Little did we realise the places we’d visit and the wonderful people we’d meet along the way. Who’d have thought we’d be in Spain because 12 months ago it wasn’t even on our radar. However, we’re really enjoying our time here. We’re enjoying it so much so that we decided to stay a little longer and put back our trip to Morocco by a few days so we won’t make the milestone of four continents in one year.

Well that doesn’t matter to us as we believe that our journeys not about ticking boxes but just enjoying the experience. It’s pretty hard to condense all the experiences into one post so we’ve decided to make a list of some of the things that have stood out over the year.

Michele: Most probably throwing up on the train from Penang to Bangkok– all I can say is thank goodness the toilet had a hose to clean up afterwards.

Ron: Visiting the Dwarf Empire, we went wit hour friends Deb and Gerry(who we had met the day before in a museum) and we decided to visit after seeing it on TV. It was an absolute freak show and we were so embarrassed that we had taken them there.

Michele: The shower in a hostel in Sweden with the communal showers, a door that opened up to the common room with no lock and no shower curtains. This also meant I would share with three other women…I got up really early and had a shower to beat the rush 🙂

Ron: The train trip from Mongolia to Russia when we were confronted by clothing smugglers who wanted us to help them out by hiding things in our beds.

We both agree that learning to change the language of the TV using the remote control. Thanks Lyn it now means we can watch TV in English.

Michele: This is so hard as we have had a year full of memorable moments. One of my favourites was couchsurfing with Ina in St Petersburg, she had never spoken English before so we had a conversation speaking/ google translating and sign language but we managed. Another was in Denmark where we turned up and were greeted with ‘Gidday mate’ our host Ole had been using youtube to learn Australian 🙂

Ron: Being in Chengdu at a markets and being treated like we were some sort of celebrities. People were walking past and taking sneak photos of us as we sat and ate lunch

Saying goodbye to the kittens after our first housesit. We had been with them for a month and seen them grow to playful little things who followed me around in the mornings 🙁

Ron : When the first bike, Queen Bessie died in Luxembourg, but it also showed us the wonder of strangers when we met Carlos who picked the bike up, organised it to be looked at and sold her for us when she was confirmed they could not resuscitate her.

Michele: Arriving in Russia and seeing our first menu, could not understand a word and the waiter could not speak any English…thank goodness for google translate

Michele: It changes from day to day. I am lucky Ron eats most things so when I make lost in translation food orders he takes the ‘yucky ones’ and I get the yummy ones 🙂 I am partial to the Spanish Flans at the moment though.

Least favourite food?
Michele: the chicken we ordered our first night in China that arrived with the head and feet sticking out of it aaarrrggghhh and it was coated in salt inedible both from the sight and the taste.

Ron : It’s a toss up between Russian and Chinese train food but I think Russia has the edge.

Finally do we have any regrets?

None at all, we have met the most amazing people , caught up wi  some of our couch surfers and their families, also experienced the most amazing things and would do it all (even the bad things) again any day. We are celebrating tonight by going to a Flamenco Club 🙂 ole