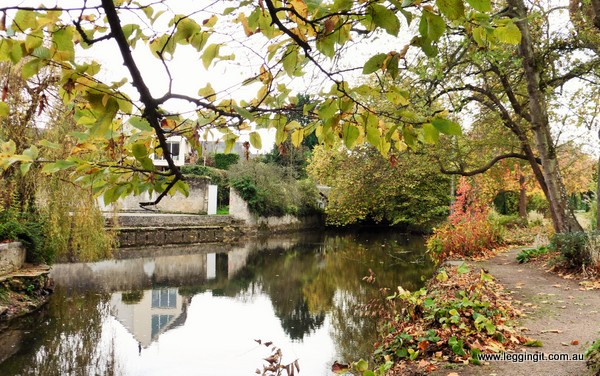 After lunch we decided to head to Bayeux to check out the Bayeux Tapestry.

Bayeux itself was stunning with all of it’s Autumn colour.

The Bayeux Tapestry is displayed at Musée de la Tapisserie de Bayeux which is not far from the Bayeux cathedral. It is 66 metres long and about 50 centimetres wide and has roughly 50 scenes on it, however a piece at the end is missing. French legend has it that it was created and stitched by Queen Matilda and her ladies in waiting but some historians believe it is more like Anglo Saxon work from the same period. The non French theory is that it was commissioned by King William’s half brother Bishop Odo, who had it hung in Bayeux Cathedral after he had the Cathedral built.

Bishop Odo was appointed Earl of Kent after the Norman conquest and became regent whenever King William was in Normandy. The tapestry tells the story of the Norman Conquest, starting from King Edward the Confessor sending his half a brother Harald Earl of Wessex to Normandy to tell William he will be the next King. Harald took an oath saying he would obey the King’s wishes on his death, but on his return to England Harald makes himself the King of England at the death of Edward and William builds a huge fleet to invade England. The Normans battle with the Anglo-Saxons at Hastings and Harald is killed. Basically it’s a story reminding everyone to keep their promises.

I know that this story sounds pretty quick but the audio guides at the museum are on speed mode to pump through as many people as possible. As we were unable to stop or pause the audioguide we had to continue walking from each numbered spot to the next so you also get the short version 🙂

It would’ve been much better to be able to press play, pause it then have a look then start again but this would’ve started a backup of people if it was busy.

The stitch work however was magnificent with the pictures made up of a variety of very basic embroidery stitches with colour used to give it depth. The detail was amazing with allsorts of gory details of battle shown even Harald with a Golden Arrow in his eye.

Upstairs was a exhibition room explaining the construction of the tapestry, which included some interactive displays. There were also models of Norman fortifications, Norman boats, armour and weapons.

The top floor had a cinema which had a video which traced the story which the tapestry explained. It was also interesting learning how during the French Revolution the tapestry was used to cover wagon loads of ammunition until it was saved by a local official. Overall for an almost 1000 year old piece of cloth it was well worth the visit. We both enjoyed it immensely.

If you would like more information you can find it here

Our last stop just on dark was the Bayeux Cathedral (Cathédrale Notre-Dame de Bayeux), which located not far from the Bayeux Tapestry was the original home of the Bayeux Tapestry. Pictures show the tapestry hung on the interior columns surrounding the congregation. It’s said that it was a reminder to the mainly illiterate congregation to keep their promises.

The Cathedral was built of course by William of Normandy’s half brother Bishop Odo and consecrated on 14 July 1077 in the presence of William, Duke of Normandy and King of England, better known as William the Conquerer. It was on this site prior to the building of the magnificent Cathedral that William forced Harald Godwinson to take the oath, the breaking of which led to the Norman conquest of England. The cathedral was damaged by fires, repaired and expanded over the years. Inside it has magnificent arches, high ceilings and large stained glass windows. Outside it has flying buttresses which support the magnificent building.

After a really full day we rode back to Caen grabbed some food from the Supermarket and settled in for the night.

Tomorrow we check out the Caen Monument.

Disclaimer: We did accept free entry to the Bayuex Tapestry from Musée de la Tapisserie de Bayeux there was no agreement as to the content of our review.

One thought on “Beautiful Bayeux”