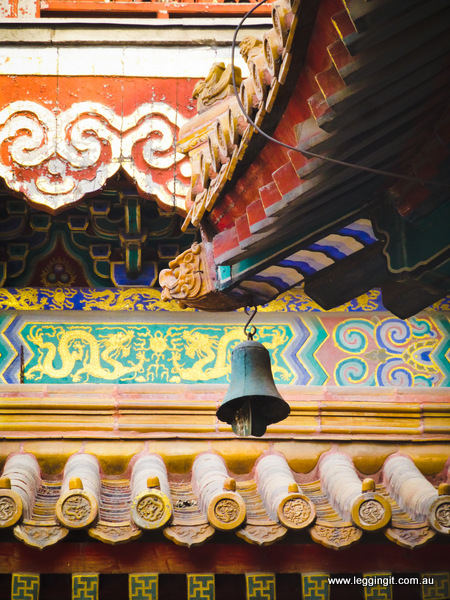 The train arrived just before nine and we joined the crush of people heading for the exit. The train station is massive as Beijing is home to 12 million people so there was a long line of people waiting in the taxi queue. The scammers were out offering taxis to all those too impatient to wait in line, but there were not too many takers. The taxis fed in three at a time so the line moved along fairly slowly. There were a few people who jacked the line but most people were stopped by the attendant and sent to the end of the line. Just as we reached the front a father, son and grandfather came around the fence, jacked the line and then tried bullying the attendant to steal our taxi. I dumped our bags in the boot as the guy tried to jump in the taxi then gave him the international hand signal for “I’m sorry sir, but you’ll have to find another taxi” (hand clenched with thumb extended moving in a swift motion from waist to shoulder) along with the simplified English translation. It wasn’t lost in translation.

The taxi was a Hyundai Elantra, like most in Beijing. It’s interesting seeing different cities using different fleets of taxis. Xian had Dyd’s, Chengdu had VW Jetta’s and Sagitars, Kunming had a lot of Jettas and Hyundai’s.

The taxi driver, pulled out the coolest reading glasses about 10mm wide with arms which swivelled and folded over the lenses as protection. He read our hostels address and we were on our way. We checked on google maps if he was going the right way or ripping us off but we shouldn’t have bothered because we were soon at the alley leading to the hostel and ¥12 cheaper than the price which had been advised in the email. He departed with a smile and we walked down to alley to be greeted by the friendly staff at the Dragons Hostel.

The hostel was really busy with lots of people checking out but the staff quickly processed our check in and showed us to our room, even though we were early and at no extra charge. It was interesting walking down the passageway as the walls are adorned with all the different city attractions and how to get there. They really have gone to a lot of trouble to set the hostel up. We showered and headed to the restaurant for brunch. We had an American breakfast each and coffee and were pleasantly surprised as they were both what were delicious.

We had planned to chase up Mongolian visas today but discovered the office was only open between 9 and 11am so we had missed it. The travel office was open so we headed off to pick up the train tickets. The staff gave us a map with the subway map on the reverse side so we headed for the subway which was located handily at the end of the lane. It was two yuan to use the subway and the train was the same as Singapore’s MRT with glass walls preventing people falling onto the track and opening doors which align with the train doors ( when the drivers get it right). The train was pretty crowded but we only had to travel a few stops. Between google maps, a map and stopping to ask directions we found the building.

When we received the tickets I noticed my passport number was incorrect as it was missing a digit. The lady promptly whipped out a bottle of liquid paper and fixed the mistake (if only the Russians had done that when they received my visa application) Tickets in hand we returned to the station stopping briefly to listen to a Minor bird whistling and saying “Ni Hao” much to the delight of the people and kids nearby.

We caught then caught the train to Yonghe Temple (Palace of Peace and Harmony) The Lama Temple”. The building started in 1694 during the Qing Dynasty and was home for court eunuchs. It was then converted into the court of the Prince Yong, and after he became emperor Yongzheng in 1722, half of the building was converted into a lamasery, a monastery for monks of Tibetan Buddhism. The other half remained an imperial palace. Hence the mixture of Han and Tibetan buildings.
After Yongzheng’s death in 1735, his coffin was placed in the temple. The Qianlong Emperor, Yongzheng’s successor, gave the temple imperial status signified by having its turquoise tiles replaced with yellow tiles which were reserved for the emperor. Subsequently, the monastery became a residence for large numbers of Tibetan Buddhist monks from Mongolia and Tibet, and so the Yonghe Lamasery became the national centre of Lama administration.
The temple is said to have survived the Cultural Revolution due to the intervention of Premier Zhou Enlai. It was reopened to the public in 1981.

The entry fee was only ¥25 which was quite reasonable and the buildings were quite stunning. The temple has many different buildings housing statues of Buddhas and other religious figures. The outsides are filled with smoke of incense as the temple is very active with worshippers praying. Due to the large number of worshippers, burning incense is forbidden inside the buildings, which is probably a good thing.

We caught the subway back to the hostel and found a nearby restaurant for an early dinner before our Kung Fu show. We ordered garlic pickled eggplant, beef rolls and KungPao Chicken and rice. What a great meal. The beef rolls was red rubbed beef with spring onions wrapped in a pancakes and the eggplant was cold and had a sneaky horseradish sauce. The Kung Pao Chicken was awesome with chicken peanuts, and spring onions with honey, lemon and chilli flavours. With two cans of coke all for the price of ¥66. We laughed at the staff all sitting around watching the Chinese soapies.

After Kung Pao it was time for Kung Fu, “the legend of Kung Fu” actually at the Red Theatre. It was a well put together stage show about a young boys’ path to enlightenment through Kung Fu and Zen. There was heaps of martial arts, flying weapons, people breaking things on their heads, tumbling acrobatics, balancing on sharp objects and also a great story of a young boy’s growth to manhood. It showed how he strayed from the path but his return and his eventual achievement of warrior monk and eventually abbot. There’s some great ballet dancing, tumbling, visual effects and a great use of props. Michele even had a great time.

We walked the km to the station and it was quite chilly something which is a bit strange after previous places. At the station we met a fellow antipodean from Auckland, New Zealand and his wife. He was probably a bit homesick and hearing the accent was really excited to have a chat. He was struggling a bit because although his wife was Chinese he couldn’t get a work visa. He could do cashies but had to be really careful because everyone wanted to see passports. Unfortunately he couldn’t speak Chinese so he was at a disadvantage. He also does work overseas but does not like leaving his wife for the long periods. It was cool chatting to him and his wife on the train, we could’ve chatted for hours but the station arrived znd we said our goodbyes.

Wandering back down the lane we stopped to buy some water and the staff and some of the locals all said hello. After hearing reports of Beijing being so unfriendly it’s been hard to find that to be true.

Tomorrow we apply for our Mongolian visas, fingers crossed all will go ok.