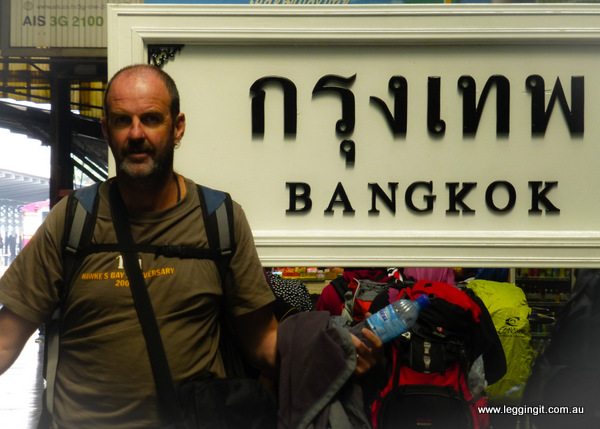 Time to say goodbye to Penang… The day started with Ron feeling a bit off colour so no breakfast of champions for him just a dry Roti for me I had my final Roti Teluah Bawang. Which was delicious as always.

We went back to the hotel and did our final packing with poor Ron feeling worse by the minute. I suggested we not leave and stay an extra night but he was determined to move on so we headed off about 12. Ron to return the scooter and my job was to get a taxi and meet him there. Not so hard you would think? I finally managed to flag one down only to discover as we drove off this was one of the rare taxis in Penang that has no meter. Grrr once I realised we were on our way so I was a captive audience, he quoted me 15 RM (about $5 Aus) probably too much but we got our revenge as the traffic was horrendous so it took a while.

We then caught the ferry across to Butterworth to catch the train. By this time Ron was feeling even more unwell and the Roti came back :-(. We made our way to the station buying some water along the way and waited in the waiting room.

The station is being upgraded at the moment as seems a lot of the stations we passed in Malaysia so when our train was called we had to almost go back to where we were started to get on to it. The train is a Thai one and the platform is about 3 feet higher than the bottom stair to get onto it, a challenge for this old girl and her backpack but I made it. Our train only had two-second class sleeper carriages this would be joined at the border by a restaurant car and first class sleepers.

We quickly found our seats and discovered we were booked on two bottom bunks which meant we were across the aisle from each other so swapped with a lovely young American guy. All settled in we headed towards Hat Yai and border control. About half an hour out I started having some tummy rumbles, we arrived were ushered off the train. First through Malaysian Border control then around the corner to the Thai entry all over within 15 minutes, I had a quick dash to the toilet which confirmed my worst fear, I was going to spend the next 18 hours on a train with a tummy bug. We all headed back on the train and to my delight, Ron told me there was a western toilet (I have never felt so grateful to see a loo in my life). The extras carriages were added and we were off well sort of, it was a strange trip we would go hell for leather for a while then stop dead for 15 minutes then we would be off again. We decided they stopped so the waiters could do their deliveries if coffee and the theory remained for the whole journey.

bugs and their impact so there is no need to go into details, let’s just say I am grateful to know we won’t be seeing the other passengers again 🙁

That said I was really impressed with the service, dinner and breakfast was served to your seat, obviously, we did not have dinner but from the comments, it was pretty good. Breakfast was average and by then we did try and eat something, next time I would just wait till the vendors came on the train with fresh fruit and other goodies, every stop there was someone coming through selling interesting food at very cheap prices.

The seats were converted to beds about 9pm with amazing efficiency, they were clean, private with curtains for each bunk and reasonably comfortable. So no complaints there at all, well worth the price of $41 Aus each.

We arrived into Bangkok a little early, walked across to the train changed to the skytrain at Sukhumvuit and could hear what sounded like a street party below, looking over the barrier the normal bustling street was trafficless, this was one the blockade areas. The media seemed to be reporting it as a violent scary place to be but from wha twe could see it was very peaceful almost like a street party complete with live music.

Back on the train we were at On Nut and our hotel within an hour. We were still feeling crap so went to bed for a few hours, got up and had dinner downstairs. Wandered across to the shops and got some supplies for breakfast and a couple of dvds, they are so cheap we will watch them and leave them here for the next person.