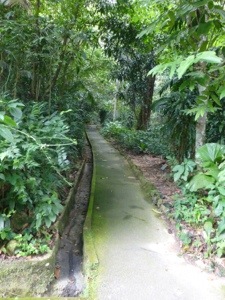 The waiter in NS Restaurant asked us 2 egg Roti, 1 plain, 1 Coffee, 1 Teh Tarek as we sat down this morning. What does he think we are Regulars? Just to keep him on his toes we ordered another plain Roti and when our Plain Roti’s arrived they had broken them up into bite sized pieces. Dunno if its the grey hair, so they’re treating us like geriatrics but it saved us the job of breaking them up so we were grateful.
We were off early in search of the Botanic Gardens. That mythical place just up the end of Burma Road turn left, then right and your there, that was PJS (Pre Jalan Sahala, Pre One Way streets)
Last night I poured over every map to find the best route, which one way streets to use, alternative routes until I had formulated a plan in my head. It was brilliant. Go down Burma Road, then head towards the Palau Pinang hospital that entails a few rights and lefts, and just before the hospital turn right into Jalan Sepoy Lines, then right into Jalan Utimo then straight on past the Hindu temples until the end of the road. It was so easy…ish

The Botanic garden was alright, although all the greenhouse exhibits were all locked which was really strange. The only greenhouse open we wandered into turned out to be an orchid shop, being patrolled by an angry man telling us “No photos” What did he think we were “paparazzi”. We wandered around the gardens taking photos of waterfalls and lotus’s. We even took a spin around the gardens on a Electric Buggy, which was a bit weird. Every time the buggy would pick up speed the driver would take his foot off the accelerator and our heads would jerk forward, and then he’d plant his foot and we’d jerk back. It was like the buggy was powered by electric kangaroo juice.
There were some macaques on the fence on the way out and we stopped to watch them climbing down the light poles and playing, they were really cute.

We headed back into Komtar, shopping centre, to pick up our glasses and then headed into Georgetown for lunch. We stopped at a Chinese stall near CIMB Bank which was surrounded by hungry Chinese but the service was appalling, ( probably explains why they’re hungry and why some locals had brought their own takeaway), so after waiting for ages as the waitress walked back and forth past us we left and found a couple of Malay stalls across from the wharves, who were only to keen to feed us. Michele had a lovely Nasi Pattaya and I, a Smoking hot Nasi Campur. All of which cost a miserly 9 Ringgit.

After lunch we headed to the Paranakan Museum, which is an old chinese mansion which has been beautifully restored after being abandoned for 50 years. It reflects the original owner a local Chinese headman and his family, (by all reports the mafia boss), and tells the story of Chinese travelling to the straits to make their fortune, marrying local girls and then the blended culture which developed. The museum area area contains the main two storey mansion, with ornate gilded chinese wooden panels, furniture, clothes, art (a gift shop), a jewellery museum, with displays of Baba and Nyonya jewellery (and a gift shop), kitchen area which contains 1 Million Ringgit worth of beautifully crafted plates, cups and other china, silverware and tin.(oh and a gift shop). On the back of the museum is the family temple, which is in fairly original condition. As with all mansions they’re available for hire for functions, and a local couple were having their wedding photos take their in anticipation of their big day.

Soon it was time to part company with the trusty stead, print off our tickets and head towards the airport. We hadn’t taken into account Friday prayers and hit peak hour traffic almost all the way to the airport. With the changing economy in Malaysia, and local cheap cars produced everyone owns a car. Infrastructure however cant keep up and to compound the problem the number of cars on the road with only one person inside was staggering.

The one hour flight to KL was delayed by 1/2 an hour, but we arrived in plenty of time. The changes to the LCC terminal was a bit confusing, as it had changed since last time we were there, and Air Asia staff not knowing where document check in was. We eventually found it got our boarding passes and were on our way landing back in Perth after a 5 hour flight. Our trip away answered a few questions about long term travelling, and also raised a few questions we previously hadn’t considered so all in all a great learning experience.