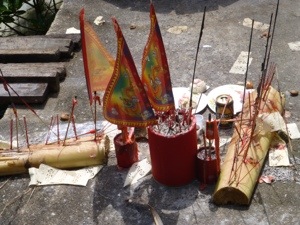 Today another breakfast of champions…..Roti Cennai when you can get a good feed for just under 50cents how can you resist. We then hopped on the bike and headed off heading around the island to explore. We weren’t really sure where we were going just head south keeping the mountains on the right shoulder and looking at the bus route map at the lights then trying to remember the names. Getting out of Georgetown was good fun the traffic was insane with all the motorbikes zipping in and out of the cars and at lights all the motorbikes getting through the traffic to the intersection, all revving like the starting grid, and just before the light changes they’re all off again. Michele has nicknamed them the mosquito squadron because they are like mozzies zipping about. We had a look at Penang Hill but the sky was so hazy it was no good to go up, maybe next time.

We headed towards Bayan Lepas, and saw the second Penang bridge, near Pulau Jerjak, and rode around the fishing village, near the industrial area. Interesting how many IT based companies are based in the area, and how they keep the fishing village behind a 20 foot fence.
We got back on the highway and zoomed past the Snake Temple, (no U turn allowed so maybe next time) and slowly wound our way up into the hills near Batu Maung, where by this time our butts had gone to sleep so we saw a roadside Shack selling Kopi and pulled over. We were met by a tall bloke dressed in robes and prayer cap who asked us if we wanted a drink. We replied Kopi, and he nodded in acknowledgement and replied 2 Kopi’s and disappeared. We grabbed a plate and picked some pastry type foods and sat at a spare table. The local Malays were all smiling, saying hello, and after a short while a lady approached the table asking if we wanted a drink, to which we replied No we’ve already ordered. She was a bit puzzled, so we waited and waited but after a while our Kopi didn’t appear, and eventually we ordered 2 Kopi’s off her(she must have thought we were strange). The bloke didn’t return so we are wondering if he had gone home and sent her back to make the Kopi’s for us but we will never know. The food was interesting sweet with chilli after tastes.
Stomachs a little fuller, butts feeling again, and 5 Ringgits lighter we departed and had a nice ride up and over the mountain winding our way back down towards Teluk Kumbar where we checked out the fishing village where local fishermen were returning with their catches. There were fishermen picking prawns and fish from their nets and others doing repairs ready for their next trip. We took a nice ride along the coast to Gertak Sanggul where we walked along the beach and cooled off a bit.
We were running low on fuel so the stress levels were slowly climbing. I’d put 3 Ringgit in on the way out of Georgetown but the gauge suddenly went from 1/2 to “warning warning danger of walking Will Robertson” in no time flat. Despite this I decided to go over the top of the range, and worse case scenario we’d just coast back down. It was a nice ride, especially as we haven’t been up here for over twenty years and really not much had changed. There were heaps of corners heaps of climbing and that beautiful smell of durians in the trees and being sold by the roadside. Over the top we made our way down the mountain past the big dam to Teluk Bahang, where we found a servo, and added 3 Ringgit of fuel.
Stomachs rumbling it was time to find some lunch, a little place selling Nasi Campur was just the shot, and a lovely Teh Tarek to wash it down. A local cat was giving a couple at another table a hard time climbing up on them to part them with their food it was hilarious. 10 Ringgits for lunch and drinks and it was timer for a look around but there were so many tourists we decided to head back to the hotel for a swim.

At a set of lights we met an old Chinese man, he asked where we were from and when we said Australia, he replied ‘ oh big country small population’, he asked where we were going and said to follow him as he knew the short cuts so we were weaving in and out of small residential roads and made it into town in record time. He stopped to explain to us about the Eastern and Oriental Hotel the Penang equivalent to Raffles and then was taking us to see something else when we lot him in traffic so sadly we couldn’t thank him, he was a lovely man and so welcoming.
We headed off to look at the Botanic Gardens which is just up the road, but the roads have all been changed into one ways and what should be three simple turns is now impossible so we just rode around sightseeing instead, spotting an old overgrown house for sale or rent. Before you could move in, first you’d have to whippersnip inside the house and add a roof…

We went for a drink and tea on Jalan Macalister and ran into a couple from Brisbane and started chatting to them. They are travelling on Motorbikes around Malaysia at the moment, after shipping their bikes to Singapore, before moving onto Thailand and beyond. It was great picking their brains about travelling, hearing their stories and they were bemused about our mighty beast that we were travelling around on at present. Soon it was time to head home, we wished them safe travels and we were back on the bike and soon rolling into our driveway. Only $18 spent on food and transport proving it can be done.