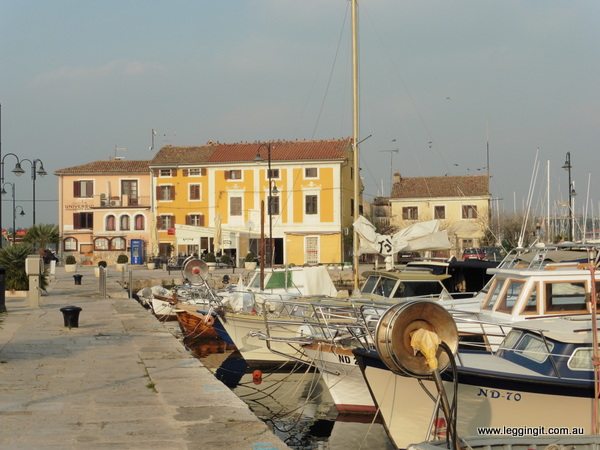 Novigrad is a beautiful little town situated on the coast in the north of the Istrian peninsular. We’ve visited there twice, in winter it is really quiet a few cafes remain open and shops servicing the locals but other than that it is pretty deserted.  It definitely looks like a perfect place to chill out in summer. There’s sheltered swimming ares, cafe’s, restaurants and a few nice shops

You may remember we spent a great afternoon in Rovinj, which stretched into an evening with fellow bloggers Vera and Frank from Frank About Croatia, and Victoria and Darren from Little Donkey Travels we accepted another invitation to meet up for coffee in Novigrad. The instructions were pretty vague “the cafe at the beach” Novigrad.

We were pretty late leaving Pula, (actually we only had 30 minutes left), but we had the idea of if we’re too late so be it.

Luckily it was a little chilly and cool air is just perfect for motorbike engines, they just purr. The first part of the journey went past pretty fast, with good roads and not too much traffic. However, as we got closer to motovun turn off the roads were a little chopped up so we had to slow down a bit. Once we reached the turnoff to Novigrad we could really open the throttle along the beautiful roads which edge the canal.
Arriving in Novigrad we headed towards the marina. There was not a breath of wind as we passed the fishing boat harbour and it was one of those moments when you cannot capture on film. The silvery water against the stark white of the boats was just beautiful. 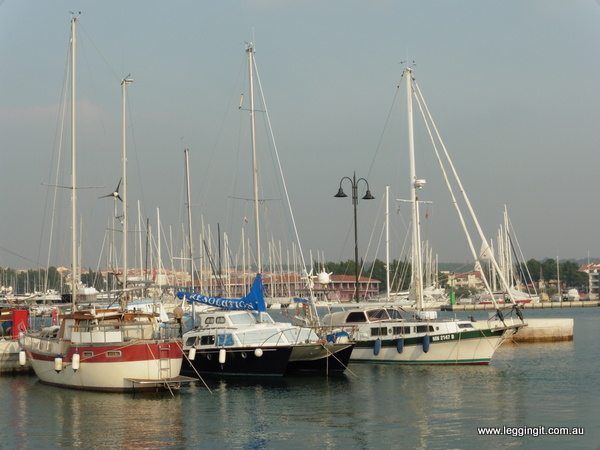 After parking the bike we took a wander along the edge of the estuary towards the sea. Along the edge are concrete wading pools for kids, plunge pools for adults and a netted area for swimming. It was so inviting.
As we passed the cafe sure enough everyone was still there so we joined them for a coffee. Just like yesterday, the day just went as we talked about all sorts of things. It’s one of the things we’ve missed the most recently, conversation. Being in a country where you don’t speak the language is pretty hard. Ordering food and the basics yep we can get by, but having a conversation ……there’s not a chance. 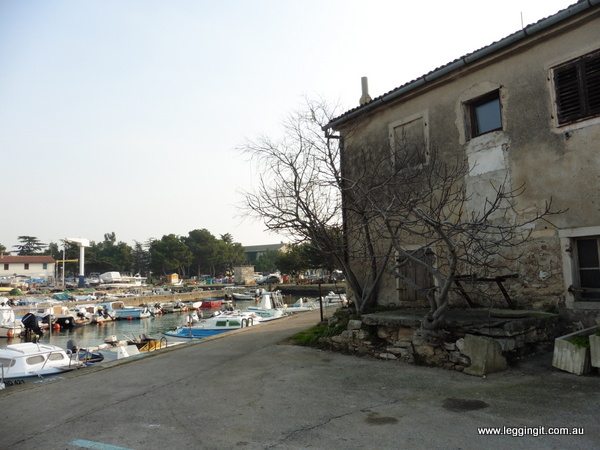 After a few rounds of drinks Frank and Vera invited us back to their house in a small village. Funnily it was the village that we had to turn back from as was blocked off by roadworks a few days ago. It was a nice ride which took us out the other road from Novigrad across a cute little lift bridge and a causeway.
The rest of the day was like a blur, meeting Frank and Vera’s neighbours who’d lived in Australia, talking, laughing at Franks funny stories, and tasting local produce. Suddenly before we knew it, it was dark, well actually it was nine o’clock. With a heartfelt goodbye to everyone and safe travels we headed back to Pula. Hopefully we’ll catch up again with everyone somewhere down the road.
Heading home was a little slower as we headed through one little town to the next as we travelled cross country. Once back on the main road however we picked up a little pace and were pretty soon pulling into the parking spot at number twenty eight.