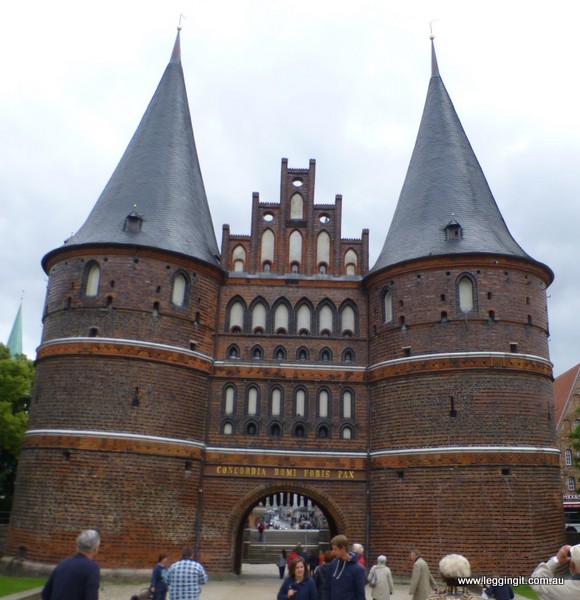 Lubeck is a quaint little city about an hour from Kiel. We took a break from Kiele Woche to check it out and were glad we did.

We were up early and out the door before 730. There was light rain on the way out and we expected it to set in but surprisingly it missed us. Lubeck’s a beautiful town which was a formerly surrounded by walls. At the entrance to the old town a city gate is still standing. We drove around the old city for a while before finding a cafe near the theatre. We grabbed a table and ordered Frustuk, breakfast. Two tiers of fruits, meats, cheeses, breads whoa it was impressive.

Walking around the cobbled streets in the centre of Lubeck there’s lots of old buildings which give it a nice charm. There were markets which also give it that European feel.
St Mary’s is close to the centre and hard to miss with massive spires making it able to be seen for miles around.

St Mary’s Basilica is a pretty impressive building starting in about 1200 A.D. as a church before being transformed into a Gothic Cathedral from 1251 onwards. The twin spires are 125 metres high with a bit of a lean. The whole church built from red bricks with high white washed Gothic ceilings. A “mother of Gothic Brick Churches” it’s been called as it was the pattern for roughly 70 churches around the Baltic region. Inside there’s some interesting features including a sculpture of 14 broken crosses by Günther Altar and a massive Astronomical Clock. During World War Two the church was bombed causing a huge fire which caused the bells to come crashing down to the floor where they remain today reminding us of the futility of war and destruction of beauty. It’s quite a moving memorial. Many of the church objects were destroyed in the fire and the Cathedral is much simpler than prior to the war. During the reconstruction which started in 1947 the original Gothic paintings which were covered over during the Baroque period were restored and many of the objects in the church were replaced. Whilst we were there the organist played for about 30 minutes which is a daily event and it was nice hearing the music flowing through the church. These days it’s a light and airy church with the interior plasterwork painted in light coloured wash with a brown outline of the bricks, clear glass in the lofty windows to allow sunlight to flood the church.

After visiting the church we decided to check out the canal tours. We decided on a little company with just two small boats. We were given an English language guide when we boarded and it was really informative. The tour took us around the city which surprisingly has lots of canals due to it being a trading centre during the Hanseatic period. There were lots of old buildings, mater mills, views of the city, churches, old city walls, moats, interesting bridges, boats and a tour around a little island covered in summer houses with small boats bumping at their piers. It was a really nice relaxing cruise taking an hour or so. On the way back to the bike we bought some Marzipan which Lubeck is quite famous for.

Overall Lubeck is a beautiful city and we only just scratched the surface there’s a lot more things to see and do. Hopefully our travels to the north of Germany will bring us back to this charming place.