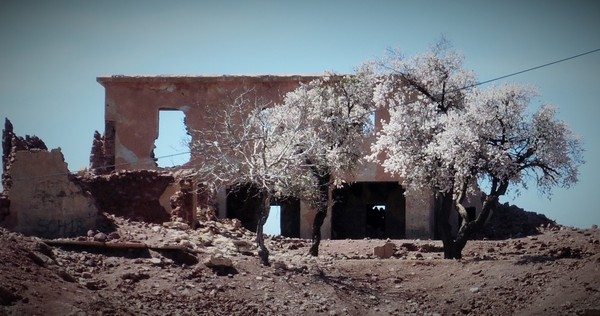 This post covers two days of riding from Taghazout to Talouine inbetween we explore some of the High Atlas.

Setting out from Taghazout we firstly headed south to Agadir before turning off and heading west to Taroudant. Taroudant is a walled city almost like an oasis in the desert. Arriving in the city we headed to our Riad and once again google maps took us in the wrong direction. Asking locals didn’t help any better with them pointing us back towards the medina. Eventually I just got off the bike and walked, discovering that we’d actually ridden past it. We had been looking on the left hand side of the road but it was on the right. What a beautiful Riad Oliver it turned out to be. Once inside the Riad the noise and craziness outside was blocked out. Sitting around the pool the birds were singing.

Unfortunately we arrived late in the day so we didn’t see much of Taroudant, we went for a walk into the medina where Ron got us lost. The medina didn’t look very impressive although it had both a Berber and Arab market. It wasn’t until we were leaving the next day we soon discovered what we thought was a small town was actually quite large.

Tizi-n-Test Pass was on our list of rides and after checking on youtube decided it should be ok to ride fully laden. Tiz-n- Test Pass is on the R203 between Zaouia and Marrakech, not far from Taroudant. The first part of the road is pretty rough with a pretty degraded one lane Tarmac but as the road climbs up into the Atlas the road turns into a new two lane road. Following the valley the road slowly rises until near it starts to zigzag its way to the top. Close to the panoramic cafe the road abruptly reverts back to single lane with the sides strewn with rocks hastily pushed up by a wheel loader which recently graded the edges of the roadway. In a few spots loose rocks had tumbled back from the road above landing on the road and threatening to rip the sump from any vehicles not treating it with caution.

The landscape was quite breathtaking with the snow-capped peaks of the High Atlas overlooking the hills and valleys far below. We passed over the top of the pass and started our descent into the valley beyond marvelling at the different colours of the Hills. There were yellow clays, red ochres, purples and greys it was just superb. As the day was getting on we decided to retrace our course and headed back towards the top of the pass where we noticed a smiling motorcyclist in front of the cafe. We thought why not break for lunch.

Sitting outside the cafe was Will the motorcyclist along with Barry and Therese who were taking a break. Will was on his way back to Marrakech after riding through the mountains around the Tiz-n-Test. Barry and Therese were having a break, well not for long because Therese was soon heading up the mountainside. It was a great place to stop and have a chat and we really enjoyed it.

After lunch we headed back down the Pass and on to Taliouine. What a nightmare ride, the roads were atrocious with road works all along the way meaning we headed off on dirt tracks every ten minutes. However the countryside was amazing so that made up for it.

In Talouine we stayed in a very small locally run Hotel, we felt like family visitors. We decided to have dinner in the hotel and it was a really good meal.