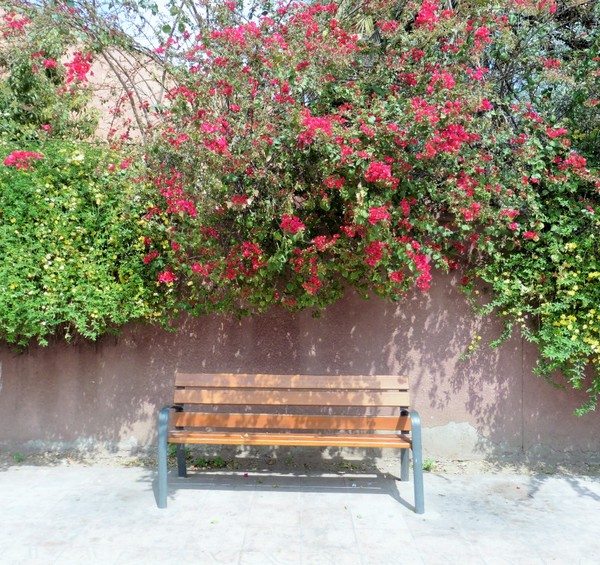 Our second visit to Marrakech was unexpected, we had originally planned to head down to Mhamid on the edge of the desert for a Nomad Festival. However fate stepped in and it was Marrakech revisited.

After riding from Taloudant through the Tiz-n-Test Pass over the High Atlas and back down the road from Aboulouz at the bottom of the mountains to Taliouine was a real “filling rattler”, with road-works for the whole 70 odd kilometres. The area must’ve had a lot of rain during winter for all the culverts had been washed out and were being replaced. There were detours everywhere and because the road was a main access in the area the trucks had chopped up the dirt tracks really badly. Meanwhile a lot of the road surface was in a poor state or being replaced so it wasn’t much better to ride on.

By the time we reached Talouine the toothache that I had checked out in Essaouira and had just started settling down, was now back with a vengeance. After a night of hell we decided that visiting the dentist was a major priority so at Tazenakht we turned north and headed to Marrakech. The run north was through some of the most dramatic countryside we’ve seen so far on our travels.

Around Talouine the hills had rocks jutting out in what appeared to be swirls and patterns. Mother Earth really does some spectacular features even in this barren landscape. The countryside really reminded us of some of northern WA with areas red rock, and silvery greys. We passed through long plains ringed by red Mesa hills with patches of wild flowers growing by the roadside. It was interesting seeing oasis fringed by palms in the hard dry country.

Along the way to Marrakech we diverted off the N9 and headed down the 1505, a single lane road used by trucks to bypass Ouarzazate. It was a great ride, reminiscent of pictures of the Mesa country in the US. Flat topped red clay hills, standing like silent sentinels along the plains. The run up to the Tichka Pass was really cool passing through villages built entirely of red clay. The cooler weather had brought a change to the countryside with wildflowers dotted amongst the rocks, adding a contrast to the hard dry land and assaulting our noses with sweet scents.

As we climbed higher the chill in the air became apparent and we were glad that we’d changed our minds and left the liners in our jackets. Tichka Pass was quite amazing with deep valleys stretching towards a ring of snow-capped mountains. On the very top of the pass were the usual gift shops and haggling vendors selling pottery, and minerals. Along the sides of the road many locals were selling what looked like thunder eggs. Bubbles of rock with the most brilliant crystalline centres of aquamarine, reds, white quartz, and golden ferrite.
The road back down was pretty twisty and choked with slow moving trucks. We took a break at a really nice tourist restaurant with views of the distant snow-capped peaks.

After lunch the run to Marrakech wasn’t as much fun as we left the hills descending into the traffic and madness. Google maps took us in circles around the city walls down one way streets getting so close to the Riad then back away from it. It didn’t help that the Riad we booked was outside the medina but in the old part of the city. It was so frustrating especially as I was in so much pain but we got there.

The Riad of course didn’t have our booking so invited us for tea while they prepared a room. The Riad was beautifully decorated and we were met by the manager who was a nice bloke but seemed hell bent on organising tours and couldn’t quite get it that we were only in Marrakech to see a dentist.

The next day we googled the addresses of a few English speaking dentists and headed off to try and find them. The whole street number thing just hasn’t caught on yet in Morocco so trying to find either of the addresses was impossible. So we gave up and started knocking on Dentist doors, using google translate to explain what we needed. Luckily the second door we hit the jackpot, we found an exceptional one who spoke a little English and very soon the tooth was X-rayed, checked and we were back on the street with a spring in our step. No need to have the tooth out, Michele was very happy with the outcome and now just had to wait for the antibiotics to do their work.

The next few days we had a ball meeting new people, catching up with fellow bloggers Megan and Tom and visiting the 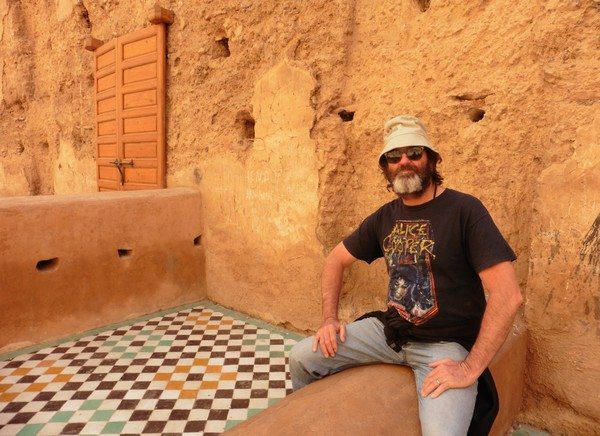 . The former Royal Palace is just a ruin these days and its hard to imagine the real beauty of the place in its glory days. One of the buildings however contained a few photographic art displays including “Selfies” a series of photos taken of course from arms length. I’m sure everyone’s taken a few over the years. Ron and I have gotten quite good at it during our trip.

We also returned to the Henna Art Café and caught up with Lori and Rashid. Once again we were welcomed with open arms and speaking of arms I had some henna done on my arm and ankle. The lady was fabulous. Whilst I was getting it done a group of girls turned up and pretty soon they were getting some done too.

Later that night we headed to the legendary Café Clock, which was just around the corner from our Riad. They’d advertised music so we found a table early. Lots of young people drifted in and a group of middle aged ladies sat at the table in the corner (we guessed they must be the bands mums) Well talk about don’t judge a book by its cover because next thing you know these ladies are taking off their outer headscarves and coats. Underneath they’re all wearing gold and black dresses, it’s like experiencing a Clark Kent moment. Well the mild mannered mums suddenly morphed into five hard rocking mamas trying to flog the skin off hand drums and beat the shine off what looked like a saucepan lid. They were singing of course not pleasant melodious songs but raw chants that crept under your skin and got your hands clapping. The kids were all going off their nuts clapping and dancing as they sang songs about all sorts of things. We were told the women were Ourzad women who came from Algeria through Fez and the songs translated to life in general. When the ladies finished a local street band picked up a small hand drum and bang they were off whipping the crowd into a frenzy with a few of the boys singing verses and chants. Meanwhile this gave the ladies a chance to slip back into their normal personas and quietly slip out the door the street crowd oblivious to what had transpired behind the doors over the last few hours.

The Clock Cafe had a sunset concert the next night so we decided to meet the two ladies from our Riad there. The band was a group of about 8 young guys some most probably brothers. There wasn’t a big crowd as the night before but the boys played solidly for about 4 hours without a break. It didn’t have the raw intensity of the previous nights’ band but the boys were jamming and having a great time, it was just really cool music. They played a mixture of instruments from guitars to five stringed banjos, hand drums, bongos and those quirky double castanet type instruments. 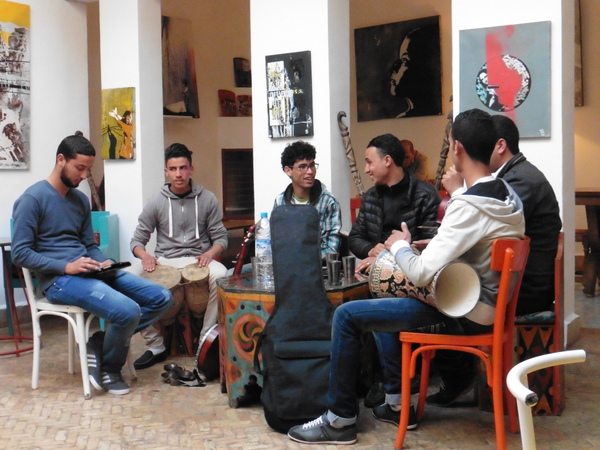 It was a real welcome back to Marrakech and who knows we may be back again before this adventures over.