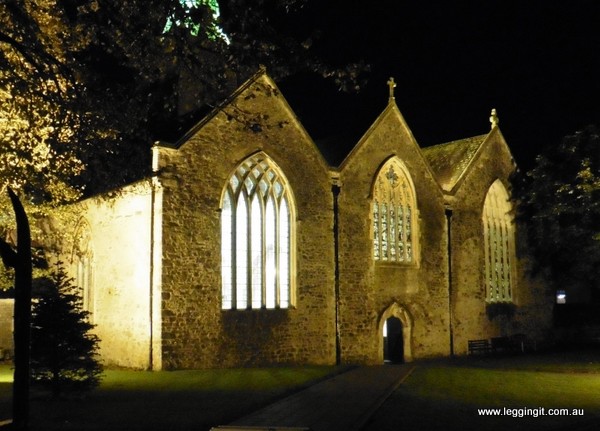 Wondering what to do at night in Tenby? You could check out the choir at the St Mary’s Church, or listen to some tunes in one of the pubs advertising live music, or spend a bit of time spending your hard earned Cyril Ash at the amusement arcade or take a “Ghost Tour”.

We met our guide, Marion at Tudor Square and we headed off down into the older section of the town. Our tour stopped outside some of the oldest buildings with one being haunted by a number of female ghosts. Some may have been jilted lovers who ended their own lives or maybe even murdered. Now walking the earth reliving their end.

Our guide took on a theatrical pose delivering the tale with vigour, with us hanging on every word as the tale slowly unwound. It was brilliant.

The tour took us to near the quay where we discovered about Fairies, not the tiny cute fluttery kind which adorn children’s bedroom wallpaper. These are ugly and sometimes malevolent ones which play tricks on people. We heard a few tales of such and also of fairy circles and how they’re portals to another world.

The brochure said to dress warmly and it was sound advice for as we passed around the point near the lifeboat station the heavens opened up and we ran for shelter beneath the Rotunda as the rain flew in sideways. Marion didn’t miss a beat and told us a story about a stranded Pirate on the island nearby.

Once the rain had passed we continued along the silent streets and heard further tales of haunted houses, the poltergeists and some of the strange goings on, many quite recently.

About two hours later we wound up at the old church where we heard our final tale for the night.

It was a great tour and very good value at £5 per person although Marion does insist on a minimum of four adults (or £20) for the tour to go ahead.

So if you ever find yourself in Tenby and are game enough get in contact with Marion her website is here . She also does other tours during the day if you are afraid of the dark 🙂