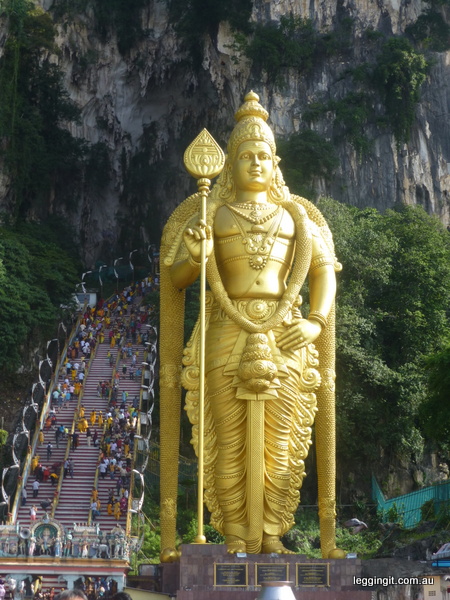 Malaysia 14/1/14
The day started with meeting some friends for a trip to the Batu Caves for breakfast. Michele had become friends with Nik on Facebook due to both being members of Business and Professional Women (BPW) and had finally met. Well they got on like a house on fire.

The trip down to Batu Caves was pretty cool with Nik’s husband taking the scenic route and Nik providing a running commentary of all the landmarks around Kuala Lumpur (KL). We arrived at Batu Caves and found the place to be really busy with people parking their cars anywhere and Indians from all over making their way towards the temple to make their pilgrimage as part of Thaipusam.

Men and little boys were getting their heads shaved and covered in chopped lemon peel and ladies were dressed in their finest saries making their way towards the 272 steps which lead to the temple in the cave.
We settled in to the small restaurant which was packed with all sorts of people. Tourists, pilgrims, families, and young guys trying to look hard core a real nice mix of people.

Breakfast was the usual breakfast of champions Roti Canai, and chicken gravy for the three of us and Nik had Thosai . After breakfast we were heading towards the stairs when we heard drummers and saw some of the real serious pilgrims carrying jugs of milk on the end of thick branches and one with hooks in his skin of his back. Whoa, now that’s hard core, forget the young posers in the restaurant.

There were streams of ladies carrying jugs of milk up the stairs and other people climbing up the stairs. When we reached the base of the stairs we saw a hefty bearded guy stripped to the waist with about ten pots full of milk hanging from hooks inserted into his back with a large weighted club like object. He was surrounded by drummers and musicians who were playing maybe to inspire him in his pilgrimage as he went into a trance like state. Meanwhile a young girl was being carried past by her family deep in the grip of a trance. It was all going off.

We returned to the car and Nik’s husband gave Michele a peacock feather as a gift of good luck. Good luck for her but not so good luck for the peacock with a bare behind.

We then were taken on a tour around Putrajaya. While KL is the business district, Putrajaya is the administrative part of Malaysia. It’s a federal territory and a  bit like Canberra with all the politicians and public servants being forced to work and live there, but as it was a public holiday the place was deserted…..just like Canberra….

There were some really cool buildings, bridges and mosques but it had an eerie feeling about it as it was like a ghost town. I almost expected zombies to start chasing us down the street.

Back in KL we were dropped off at our hotel and put our feet up for a while before popping down to Old Town Coffee House for late lunch of Barbeque Chicken and Rice and a really unusual Fish Laksa with so many flavours my brain was spinning.

Later that evening we were whisked away by Nik and her husband for a lovely meal at special eating area so famous amongst locals that it was almost impossible to find a car park….almost.

Did I say meal well I meant feast, we sure put some food away. There were indonesian Satays, Malaysian Fish in Pandan leaf, Tom Yum soup, Thai Chicken, Cockles, vegetables in peanuts and sauce, squid in peanuts and sauce, garlic roti and a little bit of rice…. A great night with great people and all cheap as chips.

From here we headed to Petaling Road where there are heaps of markets selling tshirts, handbags, wallets and of course dvds. We spent ages wandering through being acousted by visually impaired young men calling out to Michele ‘hey young lady would you like to …; We stocked up on some fresh fruit…mmm mangosteens, pineapple and mango (the latter peeled and ready to go ) and it was time to go home.

We were then dropped back off at our hotel with that glow of full bellies and happy memories of a great day out. Not long later we were both snoring our heads off. Ron

9 thoughts on “Hooked on the Batu Caves”