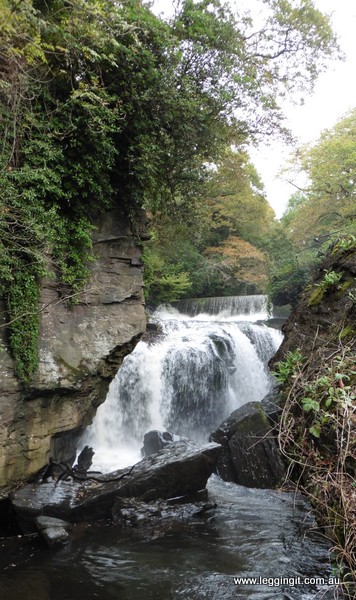 Today our plan was to get up reasonably early and spend the day in Swansea before heading to Cardiff good thing we have the time to be flexible as we started the day by sleeping in. We were greeted once again by their two dogs which are a rack up and with a hearty full English breakfast. Jan and Dave have been really nice and we’ve really enjoyed our stay.

The coastal ride along the B4311 and A484 was pretty good and it took us through the edge of Pwll, Llanelli, and across the bridge into Loughor before the run into Swansea. Swansea wasn’t overly impressive it just seemed pretty grey and industrial with lots of housing looking very much alike. Almost like it came from a factory. We then decided we would find Mumbles on the Gow Peninsula but when we reached for the Satnav we discovered that it was still back in Burry Port. Dammit.

We retraced our route and only got off track once but it was good seeing the road from another direction, there is always a positive lol.

Back at Burry Port we found Jan standing at the door with our gear, she had found it and had sent us a facebook message.lol

Deciding on a different route back to Swansea we stuck to the major road. It was a bit depressing although the further towards Swansea we got the more we noticed an Autumn change was happening with lots of trees turning a golden yellow. Instead of returning to Swansea we took the detour to Mumbles. It has an oyster festival on this weekend but sadly we didn’t realise we were a day too early. We stopped off for lunch at the marina and enjoyed a focaccia overlooking the bay.

After lunch we headed on to the Aberdulais Tin Works and Waterfall which is run by the National Trust. We almost had the place to ourselves as we checked out the remains of what was one of the 205 Tin Works in South Wales out of a total of 225 in the UK operating in the tin boom of the late 1800’s. A few of the original buildings are still in use namely the old school house which is now a tearoom and a few others.

The sites been in use for hundreds of years due to its location on the river Dulais. Originally there was a flour mill which drew artists from all over the country to visit and sketch the mill and waterfall. By the 1800’s the waterfall had been dynamited to allow better water flow and it had been converted to a Tin Works. An old black and white film shows the process of how pig iron was milled flat before being dipped in tin to create the mirror finish tin which was used in a canning revolution. It was hard back breaking work in temperatures of over 100 in the old scale which involved men women and children. There were stories of success of some of the workers but here were a lot of stories left untold.

The Tin Works operated at Aberdulais from 1831 for over fifty years relying on the waterwheel to power the mill when there was enough water. Industry has moved on the place fell into disrepair and nature has reclaimed most of it. It was nice walking around looking at the waterfall and ruins, including the remains of the old bridge and of course the waterwheel. An interactive display on bats was also interesting. In the turbine building a short film on the history of the tin works had us rolling with laughter as the presenter told the story in the most hilarious way.

After our visit we decided to take a ride up through the hills of the Neath Valley on the A4109 which took us past the Cofn Coed Colliery Museum with its old rusty bobbin head. The road took us through Ynysfaddog, Nat-Y-Cafn, Seven Sisters and Dyffren Cellwen nice little mining villages. Off in the distance there were a few man made hills (mullock heaps) from the mining days which nature had reclaimed.

All along the roadways and up into the hills the trees were a glorious golden yellow, with reds and greens, a real patchwork of colour. It was a nice area to ride through. We set our course for Cardiff and picked up the A465 and A470 which were both good quality roads where we could make some decent speed.

On our arrival in Cardiff we wanted to get some dinner before checking in. This was a challenge as we developed a communication problem as we also struck our first serious traffic in Wales, yes the M4. The locals seemed to be having trouble with the whole lane merging concept with cars going everywhere except where here supposed to. Maybe they need to take a leaf out of New South Wales book and install big signs which have diagrams and the simple explanation underneath of “like a zip”, problem solved.

Eventually we found our way to the harbour area of the city where we found a Mexican restaurant. Whilst we were there we were able to unwind a bit and sort our communication problem out.

After tea it wasn’t too far away to the B&B. When we arrived we started chatting to our host Steve who told us of his mate who’d ridden across Central Asia. We really wanted to meet him so a phone call later and Francis was on his way. When people say to us we’re brave well there’s always someone else braver. Francis told us some of his adventures riding through Mongolia and Russia wow. Almost drowning trapped under a bike in the river, putting earplugs in so that he couldn’t hear the animals scratching at his tent in Siberia. Riding through Jordan, Syria, Afghanistan, Kazakhstan, Tajikistan man he puts us to shame but at the same time he also inspires us. We had a great night with Steve, Sarah, and Francis chatting about travelling and the world in general.

Too soon it was close to midnight and we had to all say goodnight, ending an awesome night.

Tomorrow we’re having a bike free day and heading into the city to visit Cardiff Castle.

Tomorrow we’re having a bike free day and heading into the city to visit Cardiff Castle.