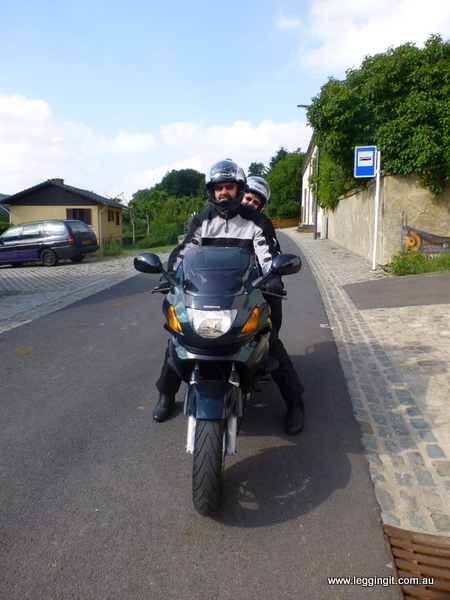 On the road again…. How to register a motorcycle in Belgium if you are not a resident.

Just to get you up to speed: After a month of house sitting in Luxembourg it was time to hit the road again. Getting the “Princess” registered turned out to be a real drama. Belgium will not allow a non resident to register a vehicle, however nobody told us that when we purchased the motorbike or in the four weeks of talking to insurance companies and the Registration people. However if like us you purchase a vehicle then the only option is to get a transit plate (plaque transit) which gives you the opportunity to get the vehicle into another country where you can register it. To get a plate you need the original immatriculation (Carte Prise), the sales receipt (facture), a passport, and special insurance (assurance speciale).

Our friend contacted a number of insurance places before we were put onto BIOS Transit on Rue Picard, in Brussels. Rue Picard should be renamed Transit Plate street because there are at least 10 or more insurance companies which specialise in Transit Plates.

We arrived in Brussels on Friday ready to pick up the plate to find out that if plates are issued on the 15th of the month. If we picked up a plate on Friday the 13th our transit plate would expire at the end of June, however if we picked it up on Monday the 15th it would expire at the end of July for the same price. We handed over our paperwork and they told us that the plates would be ready to pick up on Monday at 1100. Normally the process only takes about 30 minutes, you hand over the paperwork, pay the money and they provide a number plate. Simple as that. 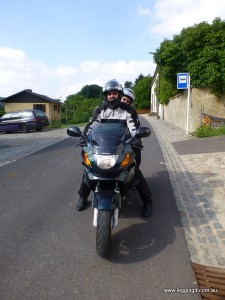 It was a beautiful day as we hugged our friends goodbye, patted their pets for the last time and climbed aboard the Princess. The stowage space was a lot smaller than on the ST1100 with tiny built in panniers and a smaller capacity top box however there was a tank bag which saved the day. We parted company with my manky old runners, and a few clothes which we didn’t have the space to take.

As we were leaving Luxembourg the sun was shining and we were singing our favourite song “I’m driving through town on my tractor”, as you do when you’re from Luxembourg as you have to follow tractors every five minutes. Lol

Driving through the beautiful winding hills and through the little villages was magical. The patchwork quilt of different crops growing across the tops of hills was just beautiful.

It was really different riding the Honda Deauville 650cc after the bigger bike. The Deauville has a smaller screen so we don’t get blown as much by cross winds but as my head’s always above the screen it’s really noisy inside my helmet. Handling, well the Deauville drives itself it is so easy, however, as its normally aspirated it’s not as responsive as the EFI of the ST1100 and of course top speed of the 1100 is a bit more. The V-Twin of the Deauville gives a nice little purr and with the revs up is pretty responsive. 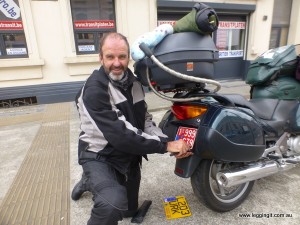 We headed up to Brussels and it purred along the freeway with the two of us and all our gear at speeds up to 120kph no problems. After a pitstop close to Brussels (note to self do not stop at a service station for a toilet break when there’s 5 or 6 bus loads of kids). I think the teachers had been filling them up on red cordial, as they were all yelling and lined up about 100 deep waiting for the toilet.

After a quick stop in Brussels to collect our plate and to enjoy the traffic jams of course. We headed south through Aachen to Koblenz. Amazingly while we were travelling we passed through the bottom end of the Nederlands (four countries in one day). We came into Aachen from the north and stopped for a nice late lunch of schnitzel and salad, while Michele had an English Hamburger. It was funny trying to order an English Hamburger in German but saying English Hamburger. lol

The German soccer team were playing so everyone was out in there German shirts with their faces painted or wearing flags like superman capes.

As we were getting back onboard the bike there were a few spits of rain and as we got onto the freeway it picked up a bit. A quick stop to get our rain jackets on and we were back into it.

The freeway wasn’t much fun with trucks bumper to bumper in the right lane doing about 100kph and everyone in the left lane doing anywhere from 120-180kph. One peanut was going so fast he didn’t see a big rock about the size of a house brick, and ran over it flicking it across hitting me in the foot, luckily bouncing down away from the bike. Feeling returned to my foot about 100 km’s later but I was glad it didn’t hit something on the bike.

Eventually we arrived in Koblenz (Coblenz) and after 470 km’s on the bike our bums were way past sore. We had booked into the Youth Hostel at Koblenz. It’s situated in Ehrenbreitstein Fortress, an old fortress with outstanding views overlooking the Rhine and the city on the other side. Unfortunately parking was in the fortress public carpark and we had to drag our gear over 500 metres to the hostel. The hostel was swarming with children as it’s summer holiday and German parents have packed their kids off to youth camp, which of course was our hostel. The room overlooked the river and was quite modern with shower, toilet and bunk beds. Of course Michele took the bottom bunk.lol

After a big day on the bike we headed to bed early as the kids were lighting their kerosene lamps to go exploring in the fortress (I was tempted to tell them a few ghost stories before they left.lol)

Tomorrow we look around Koblenz. 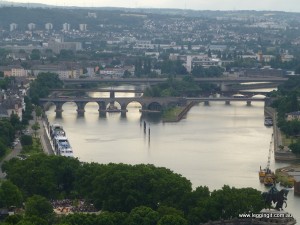 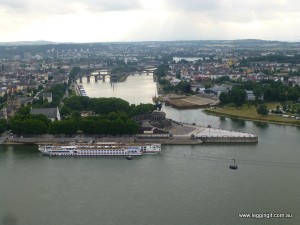