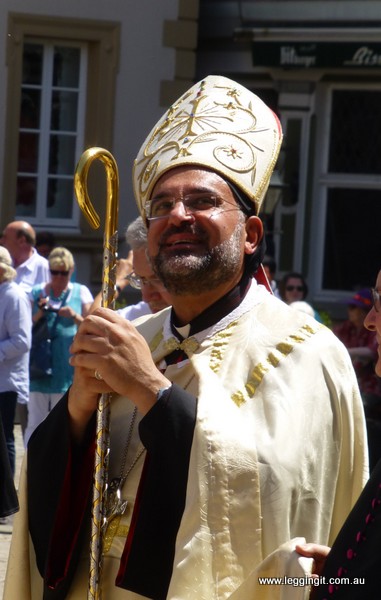 Today we ventured to see the Echeternach Dancing Procession.

The happens every year on the first Tuesday after Whit Sunday and it sees thousands of Roman Catholic Pilgrims gathering in Echternach, Luxembourg to dance their way through the streets.

Echernach is the last traditional dancing procession in Europe and is a true spectacle.

Pilgrims  meet as they have done for hundreds of years, to honor St Wilfred. The reason why seems a but unclear, the festival may be traced back to the time of death of  St Wilfred but noone seems sure. There also may be pagan links but this also can not be confirmed.

The pilgrims of all ages,  form in groups starting early in the morning with a mass at the Abbey. Then the musicians play the “Sprangprozessioùn” tune–a traditional melody, which almost sounds like an Irish jig. The pilgrims, then in rows of four or five abreast and holding the ends of white handkerchiefs,  dance their way along winding their way through the town towards the Cathedral.  Accompanied by bands of all descriptions from brass to recorders.

It was truly a spectacle watching them all dancing through the streets, the young and the not so young and well worth seeing if you are in the area.

PS don’t worry if you are not an early riser we arrived around midday and there were still plenty of groups dancing through the town.

Here is a youtube clip of the festival so you can see it.

After the parade was finished we went on to Beaufort Castle to have a look around. It was really three castles built in different periods, the first in the 11th century a small square fortress built on a large rock built surrounded by a moat. Other parts were added through the centuries with the castle we now see completed  in the 17th century. It really was an interesting place to wander around and explore… you can read more about it here