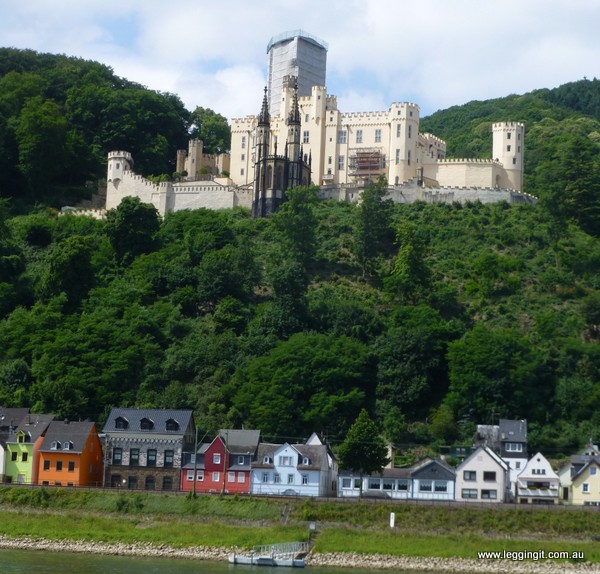 We were up early for a walk around the fortress and to take some photos of the city and the river. Ehrenbreitstein Fortress was built in the early 1800’s although there have been fortresses in this spot for over 1000 years. It is part of fortifications spread across the city. It’s said that the fortress is second only in size to Gibraltar but I couldn’t find a measuring tape to check out if the claim was true or false. Either way it’s a pretty imposing structure. These days it contains a Youth Hostel, restaurant, museum and archives but there are still large areas of the fortress unoccupied.

We arrived too early for breakfast so had a coffee while we waited. Then just like a flood gate opening kids just started pouring into the cafe all yelling to heard above all the yelling. Eventually we joined the heaving mass of people gathered around the buffet filling their plates with breakfast items before finding a table with our names written on a place card.

After breakfast we packed our things and started carrying them back to the car park, before being rundown by the reception clerk demanding money. (I’d thought Michele had paid when she booked.oops lol)

After packing the bike we tried to exit the car park. After driving around the boom gate yesterday the security was waiting for us, so we had to pay. We’d been quoted 3euros on the hostel website but now we were charged 6euros and it wasn’t good enough to show them the hostel receipt they wanted us to go back to the hostel to get our parking ticket stamped. We weren’t having none of that so we told him flatly that the receipt is proof gave him 6euros and told him to open the gate. With these little hidden costs adding to the accommodation it’s a wonder how people can afford to stay at this place.

We rode over the bridge and into the city finding a park at the back of the Rathaus(townhall). The weather was glorious as we wandered along the river and I suggested to Michele we take a cruise on the Rhine, what a romantic.lol

A few boats had already left or had cruises later in the da but we found one ready to leave and after purchasing two tickets for thirty euros we boarded the “Confluenza”. We were immediately impressed with the waitresses service as soon as our bums hit the seat we were served coffee.

After spending many years around boats I have a sharp eye for detail and the boat was in very good order. The interior layout was clean and modern. The staff were happy and polite. I even noticed them emptying bins which shows that they pay attention. The thing which made me feel most comfortable was when another cruise boat which we were overtaking “cut us off”. The master immediately sounded the horn 4 times which correlates to “what are your intentions?” dropped the speed and became ready to take evasive action. The other vessel passed clear of us and we continued on our way. They had commentary in both German and English pointing out points of interest along the river.

Cruising up the river we passed lots of beautiful buildings starting with the new Koblenz Schloss, a large white building with a gray slate roof which was quite beautiful. There were villages of what the English call Tudor style houses, and lots of temporary villages of people enjoying their summer break in caravans, tents and campers by the river. Just like in the brochures there were castles high on the hills overlooking the Rhine. We saw heaps of castles, Lahneck Castle built in 1226, Stolzenfels Castle dating back to 1259, Marksburg Castle which is over 700 years old and is the only castle on the rhine which has never been destroyed, Sterrenburg Castle which is at least 1000 years old, and Liebenstein Castle which is a private residence. We also passed one which had been partially destroyed but converted into a tudor style hotel.

The boat stopped at a number of places letting people off to explore further. The hills were lined with grape vines and this area was the home of Riesling wines woth one vineyard stretching 4 kms long. The final stop was at Boppart, a quaint little town with lots of older style buildings before returning to Koblenz. We were feeling peckish so decided to check the menu. The prices were quite reasonable, for only 23 euros we enjoyed schnitzel, chips, salad, also a meat, cheese, salad platter and two drinks. A nice relaxing cruise with good service definitely a great way to spend the day.

After the cruise we wandered around town firstly checking out Wilhelm 1 statue where the Moselle and the Rhine meet. The original was destroyed in WW2 leaving only the concrete base but its been rebuilt. The statue of Wilhelm astride a horse with an angel walking beside him is massive (I’m sure you’d be able to see it from outer space)

We also checked out a few churches and cathedrals some beautiful and simple with “a feel” about them and others outstandingly beautiful without that special feel. We also found the History fountain in Goerresplatz which was pretty cool. It’s 10 metres tall and has many layers representing Koblenz through the years. At the bottom are wine merchants rowing barrels across the river, the Roman occupation, take over by Louis XIV, Napolean, destruction of the city during World War Two and finally the rebuilt city on top. It was really impressive.

As we hadn’t heard from our accommodation booking in Munster we decided to take a ride out along the Rhine to Boppart and check into a local guesthouse. The ride was awesome with the Rhine on one side, castles high on the hills and hills covered on grape vines. When we arrived at Boppart we rode around and around but couldn’t find the guesthouse. We found another and as it was around the corner just rode there and rang the intercom asking “Haben Sie ein zimmer frei” to which the reply was “have you got a booking?” Err No…….” We have no rooms available” hmmm online says there is but their loss. We tried to find the first one again before discovering that it wasn’t in Boppart but 14kms out of town and reception was shut on Tuesdays. I suggested Bonn as it was close and was in the general direction of Munster.

We thought that “Chrissy” (the satnav) was taking us on a wild goose chase as we headed the opposite direction from Koblenz through little streets before the road started climbing snaking up through the mountains above Boppart. It was a nice ride with heaps of blind corners and the up and down through the gears as the princess climbed up the mountain. Unfortunately the fun ended when we entered the motorway and joined the traffic. Trucks slowly moving in the right lane maniacs in the left lane. There was a fairly strong headwind and it wasn’t much fun riding into it. Some of the trucks were having trouble as well and were being blown around.

It was nice however crossing over a really high bridge with the Rhine and hundreds of little houses thousands of metres below.

Arriving in Bonn we found the hostel we had booked online,carried our bags inside and settled down for the night. While it was adequate it was not in the top of any we had stayed with since leaving home.

One thought on “Koblenz Germany”