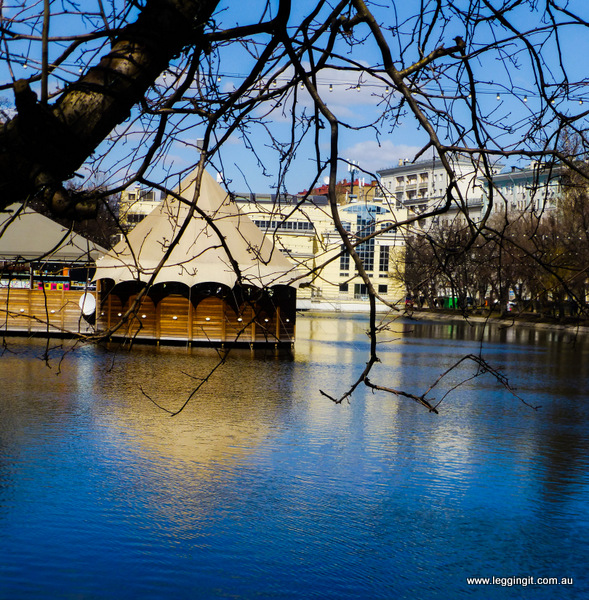 At 0430 the cabin door slid open followed by “Mokba, Mokba”(Moscow, Moscow) in a thick Russian voice. We turned the lights on and checked our watches. What the?… We weren’t due in until 6am! We had a quick wash, stripped our beds and packed our bags. The conductor was obviously keen to get all the bedding back and the bins emptied, so had woken us all early.

When you’re stuck on a train for three days with no showers, just a basin with cold water you either just wash your face and hands because you don’t really sweat or you wash. We’re used to washing twice a day so just washing face and hands wasn’t an option. Luckily the train was heated to about twenty five degrees so it wasn’t unpleasant having a cold wash but I also used some hot water from the samovar at the end of the carriage (I’m not a huge fan of washing with cold water)

The train eventually pulled in at the scheduled time and we got off into a chilly Moscow morning. The train had arrived at Yaroslavskiy station and at the end of the platform was the entrance to Komsolotskaya Metro station. We wandered past the usual crowd of leather jacketed taxi drivers and phone card salesmen and headed into the subway.

In Moscow they use swipe cards at the entry gates and pay a single fare of 26 roubles no matter how far the trip is (1 or 10 stations it doesn’t matter) I handed over a 1,000 rouble note and asked for “dvah bilyets”(2 tickets) and pointed to the sign which had all the different ticket specials, intending to put 500 on each card. The ticket lady didn’t understand and started begrudgingly printing tickets thinking I wanted two which only cost 52 and was intending to rob her of all her change. Then I think she thought I wanted a heap of tickets so she started printing more. Finally I wrote 2 x 20 trips 500 and she got the message.

Moscow is famous for all the Art Deco subway stations and finally seeing them was absolutely amazing. As we travelled along we saw station after station with chandeliers, different coloured marble, domed ceilings it was wonderful. The subway trains in Moscow are the fastest we’ve seen, and we had to hold on firmly every time the driver planted his foot, to avoid whiplash. Every sign in the station is in Cyrillic so it took a bit of time to decipher where we were going. The one thing I thought was a great idea was signs on the tunnel wall facing the platform which had the train line, stops, and the different coloured interchange stations and destinations beyond these stations. It made choosing the right interchange really easy……..if you read Cyrillic.lol

When we arrived at our station we ventured out into the cold again minus one really felt cold. Not far from the station was an impressive looking building which was originally intended to be high class housing for the cashed up Muscovites. However, the top quarter of the building didn’t sell so eventually became a high class hotel, charging $300 per night. The early morning sun shone on the massive building giving it a pink glow.

We met our Couchsurfing hosts who are from the US but have lived in Moscow for a couple of years. They were such lovely welcoming people even though we got them out of bed to let us in and we chatted for a while before we left for our task for today.

Our objective today was to organise a visa for Belarus. Our train is stopping for seven hours in Minsk so we are required to obtain a transit visa. The metro was so easy, we changed once and within 15 minutes we arrived at Kitay Garod station. With no idea what all the Cyrillic letters meant we headed for an exit and when we reached daylight we were amazed, because we had our first real glimpse of Moscow’s most famous icons, the golden domed roofs of the churches of The Kremlin.

I tried to work out where we were but try as hard as I could I couldn’t find the street we were on. A nice Russian bloke spotted that we were a little disorientated and came over to help us. The street name on the sign was written Varvarka (which of course is cyrillic) on the map its written as Barbarka so my brain just couldn’t compute this. We were soon on the right track and headed towards the Belarus Embassy. When we arrived at the address on Armyaskiyev Pereulok the Belarus embassy was nowhere to be seen. A Russian lady walking past asked us if we needed help. We asked her if she knew the location of the embassy but she did not. However she went inside the hotel and asked the manager the location.

Actually it was back around the corner on Ulitsa Maroseyka. She decided to take us there and kindly rang the bell and spoke to the security for us. We were told that the embassy was now closed until between 3-4 pm. What a pain according to the website it was supposed to be open until 12pm and it wasn’t midday yet. We thanked Diana for her help and had a brief chat to her telling her a bit about ourselves and she told us a little about herself.

As we now had three hours to kill we decided to walk around and were amazed at how beautiful the area was. The buildings were absolutely stunning. It certainly changed some of our perceptions about Russia.
The local cafe’s however were charging ridiculous prices for food and drinks 300 roubles for two coffees (about $9.) so we skipped lunch. We then decided to head out and pick up out remaining train tickets from the Real Russia office. They had given us excellent directions and we found them easily, everything was checked and we were out of the office within 20 minutes.

We had seen a line outside a takeway kebab shop so decided it must be ok so grabbed a few kebabs for a third of the price of a bread roll in a cafe. A bit different to what we were used to as they had dill pickles in them and cabbage but really delicious.

We returned to the embassy, filled the paperwork out and when we asked the information assistant, she told us we couldn’t process our paperwork today. She went on to tell us that the embassy was open between 10-12 to accept visa applications, however, we would have to be at the embassy at 0830 because there were only 15 tickets per day. (it just kept on getting better) A tourist visa took 5 working days to process, however if we were to pay double the price €43 each then it would be ready on Monday. All this hassle for a seven hour stop in country we hadn’t planned to go through anyway. Our original plan was to catch a train from St Petersburg to Warsaw but the train got cancelled. We’d looked at training it to Helsinki and catching the ferry but this was taking the long way around and added onto our travel costs. There was also the small fact that Michele even gets sick on the Manly ferry, so crossing the Baltic Sea might not be fun for her.
As the day was almost shot we took a little walk around checking out a nice little church and passing the secret KGB headquarters ( hmmm I don’t think it’s a secret anymore)

The subway back to the flat was interesting with 4 escalators moving people up and down the 4-5 storeys from station level into the bowels of the subway.

The subway is the second most used after Seoul Korea, moving about 9 million people on weekdays with a train every 90 seconds during peak hour. A male voice announces the stations when you head towards the centre of the city and a female when you go away from it which is quite weird. The platform side has no station signs so it takes some getting used to listening for stations in Russian and looking for the station names on the tunnel wall.
When we arrived back at the flat we all decided that we’d eat in so the three chefs got together and made Pasta and three cheese sauce, salad, cheesey flatbread and some sliced apples for dessert. It was a fun meal with lots of story’s, laughs and some good food too. All too soon it was quite late, we decided if we didn’t hit the sack our carriages would be turning into pumpkins. Tomorrow Belarus visas fingers crossed.

10 thoughts on “Moscow and The Elusive Belarus Visas”