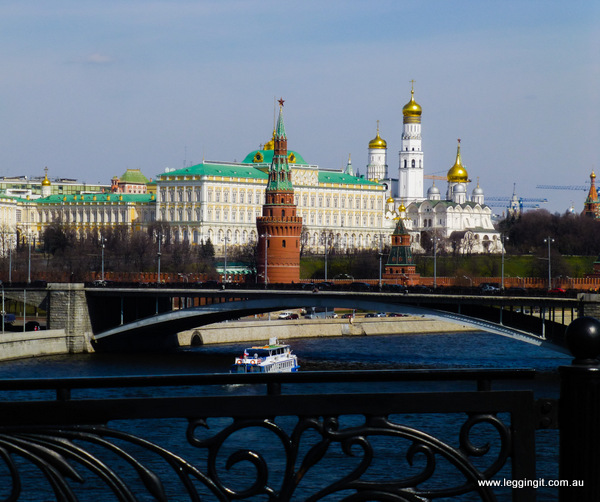 Off for a walk around Moscow today after a strange start.After months of hotels hostels we woke up in a  flat all by ourselves was almost like being at home. We’re house sitting for a short while which is a bit of a bonus so we’re able to kick back a bit.

It’s just so nice to leave Russian language outside the door. When we’re out my brain kicks into overdrive as it continually tries to translate every sign, poster, graffiti from Cyrillic to English. It’s bloody annoying and draining after a day of it. P’s are R’s, C’s are S, triangles are D’s thirty three letters all up to decipher.
Travelling through the subway trying to pick different stations from signs has been really challenging but it’s getting easier.

After a late start we stopped off at the local bakery where I used my broken Russian “purfektlee” and ordered quiche and a salad roll. Reading Cyrillic and sounding out the words sometimes the Russian words are almost the same as English and we’re getting to recognise some common food items on menus.

The Moscow Couch Surfing community were having a meet and greet walking tour, hosted by Roman. The meeting point was in the middle of the two platforms at station, one of the first subway stations built in Moscow. Our instructions were Roman would be wearing a badge so we couldn’t miss him. We arrived quite early and it was hilarious watching the people and then trying to work out if they were couch surfers or not as each person or couple gravitated to different columns lining the middle of the platform. Just when we thought we’d found Roman the guy met a girl coming off the train then boarded to next one on the opposite platform. It almost became like a spy game with a low whisper of “pssst are you a couch surfer” A guy turned up in Army uniform with what looked like a wildebeest on his head and we ticked him off the list. Soon a small group was gathered around a pillar and looking like the right demography of people we wandered over to find Roman with his Couchsurfing badge. Eventually there were about twenty odd people (well not actually odd compared to the guy with the furry hat) but there was about twenty people all up. Roman told us a little about the subway, (between trains) before we headed out into the bright sunshine.

Just outside the station is the monument to Alexander II who was born in 1818 and ruled Russia until he was assassinated in 1881. He was also the King of Poland, Grand Prince of Finland and during his reign his most notable achievement was the emancipation of serfs in 1861. Serfs were the peasants owned by the landowners. A landowner could sell a peasant to another landowner and keep all the serfs goods including their family. The only obligation a landowner had was they weren’t allowed to directly kill their serfs.
Other reforms he was responsible for included reorganising the judicial system, setting up elected local judges, abolishing capital punishment, promoting local self-government, imposing universal military service, ending some of the privileges of the nobility, and promoting the universities. However his secret police sent thousands of dissidents into exile in Siberia. Despite all the good things he did he still annoyed heaps of people and he was despatched from this mortal coil with a bomb.

The next stop which is really hard to miss was the Cathedral of Christ the Redeemer. It’s an impressive building which isn’t as old as it would seem. It actually was built in the 1990’s. It boasts that it’s the tallest Orthodox Christian Cathedral in the world and it’s built on the site that the original cathedral of the same name was built in the 19th century. The original church was the scene of the 1882 world premiere of the famous 1812 Overture by Tchaikovsky, something worth boasting about.

Stalin decided that the original cathedral had to make way for construction of a colossal Palace of the Soviets. The story goes that the whole place was rigged with dynamite and blown up. There’s also stories that the marble used in the Moscow subways originated in the cathedral. The Palace of the Soviets was never built, and the area became an outdoor swimming pool instead (heated of course for all year round swimming). Eventually with the changes in Russia the church was reconstructed in the 1990s on the same site. Its other claim to fame for music buffs is that it’s the church in which the Russian musical group Pussy Riot staged a musical protest performance, leading to their arrest and international fame.

Apart from all that it’s actually a beautiful building completely white with golden domes topped with crosses. The striking thing is the bronze statues above all the doors. There’s all sorts of historic scenes and saints etc, but for me some of them look like some of the characters out of the Life of Brian. The traditionalists don’t like the cathedral because they say it’s too big and lavish, exactly against what the Orthodox Church stands for. But hold on, wait for it no one is to throw a stone until I count to three, even if they do say Jehovah.lol

We crossed over the bridge and discussed the huge monument to Peter the Great near the Art Gallery. It was erected in 1997 to commemorate 300 years of the Russian Navy. Peter the Great was the man responsible for creating it. The statue is the 8th tallest in the world weighing 1,000 tonnes and was designed by a Georgian artist. Muscovites loath it also for a few reasons. Rumour has it that it was built for an American customer to represent Christopher Columbus but when the deal fell through they replaced the head and hey presto it became Peter the Great. Another thing against the statue is the man himself Peter the Great hated Moscow and moved his capital to St Petersburg. Muscovites would be quite happy to send his statue to his beloved city.

The walk took us through some of the older areas where artists, poets, writers lived. There were beautiful old churches, old manors and even a soviet era building that housed writers. Obviously if you wrote the right way you were granted a unit. However if you didn’t toe the line you didn’t get a unit, but a nice ride to Siberia instead. We even passed a motorcycle club gearing up for a club ride unfortunately we arrived a little late and we weren’t able to have a chat. They looked pretty impressive on a mixture of sports bikes and big tourers.

Another interesting area was a small canal with a park alongside it with heaps of brides and grooms. All along the canal and across the bridge the council had erected metal trees which locals pledged their undying love by attaching a padlock then casting the key into the canal. On one side of the bridge was the bench of reconciliation where lovers and newlyweds gathered to take photos.

Roman told us all sorts of facts and pointed out bits and pieces as we slowly made our way through different parts of the city before ending up in Tretyakovskaya. By this stage our original group had dwindled down to a few locals and a French girl so the six of us stopped to have a cuppa at My My cafe. It was nice speaking to everyone and finding a bit about all of them.

Soon it was time to leave we went searching for an internet cafe to get copies of our passports and visa documents. It took a while to find the place. We expected a small place fronting the street but they were actually inside a very posh shopping centre on the second floor at the back of the building. There were a few people on the computers busily chain smoking and for all the Rocky and Bullwinkle fans Natasha was sitting at the bar wearing a black short dress, black stockings, stilettos smoking a long slim cigarette. It was one of those stereotypic moments in life. The girl running the internet cafe told me I had a beautiful moustache which was a bit of a shock (even Russian girls love the chopper mo) lol
Feeling positive now we had all the paperwork needed for our Belarus visa we returned back to the unit where I cooked a fine pasta meal.

Tomorrow a few walking tours, one of the Kremlin and one of the Metro

2 thoughts on “A Walk Around Moscow”