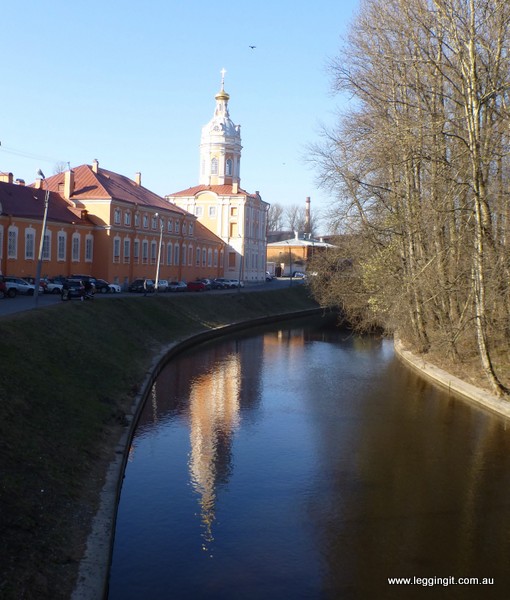 Once again St Petersburg was bathed in glorious sunshine. We woke fairly early as our host fussed about preparing breakfast of Ham, cheese, bread and pastries with freshly brewed coffee. This was served with traditional Russian Easter Eggs boiled in onion skin to give a rich brown colour.

She packed her backpack and soon we were on the train. We stopped at a Cathedral which was packed with local people coming and going. A mass was underway with priests dressed in red leading the congregation in prayer. The cathedral was really busy with people standing for the mass whilst others popped in, burnt candles, said prayers before returning back outside. The cathedral was surrounded by a cemetery which although not as ornate as the one we visited in Moscow still had some interesting statues as headstones.

We headed back outside and across to the supermarket where we bought a few groceries.
Then it was back to the metro again and on to the next station.

Eating out is a luxury that many Russians still can’t afford so logically they pack their food and bring it from home. It’s one of the things we noticed when we’ve been out and about. The cafes and restaurants are ridiculously expensive.

We headed to a park on an island and it was beautiful enjoying the sun. Some locals had their seasons mixed up, thinking it was summer, had stripped down to their budgie smugglers and bikinis had ripped the towels out and were lying out in the sun. I had to drag my sunnies out because the glare off their pale bodies was blinding me. Eeeewww

It was really nice sitting by the water eating rolls with salami and cheese and drinking sweet black tea. After lunch we grabbed the nuts out of the bag and went in search of squirrels “shhh be vewy vewy qwiet” oh no that’s wabbits.lol

Well we thought there’d be squirrels jumping out of the trees as soon as we opened the bag, but it was not the case. There were a few here and there but lots of other people had monopolised them already, bloody locals. We found one and our host showed us how it was done, crouching down slowly and opening her hand to show the squirrel the nuts. The squirrels were cute with ginger fur on their top half and grey fur on their bottom half. Almost as if they were wearing pants. They had long fluffy ears and bushy tails. They would take a nut from our hosts hand then find a spot and bury it before returning for another nut, then repeat the process. For us southerners it was fascinating and cute. We moved on to other squirrels but these ones didn’t like our nuts, (they’ll be sorry next winter). Three of them played chasies around and up and down the trees.
An oompapa band was playing in the park near another palace which was close by and locals were dancing to the music, but not waltzing just waving their arms and legs about doing the Boris Yeltsin.

The squirrels became too well fed so we left the park and had a look around the amusement park. They had some death defying rides which were absolutely ball tearing. One ride was like a rocket attached by wires to a cantilever arm. The arm raised the rocket a few hundred feet in the air and then swung it around in one big circle. Definitely a white knuckle ride. Another was a boom with seats at each end which swung over a central pivot, (sort of like the candle with a pin through the middle trick only on each end were screaming girls and brave faced macho men) The price of rides was ridiculous even more expensive than the Royal Show and that’s saying something so I gave it a miss, plus one of the rides broke down which didn’t fill me with confidence.

As it was getting late we headed back to our hosts flat where we played Skip-Bo for a few hours while chatting using google translate every now and then as a backup. It has been an amazing transformation for our host who had never spoken English before in her life to two day later be communicating efficiently. It’ll be sad to say goodbye tomorrow.

2 thoughts on “Our Russian Easter Sunday”