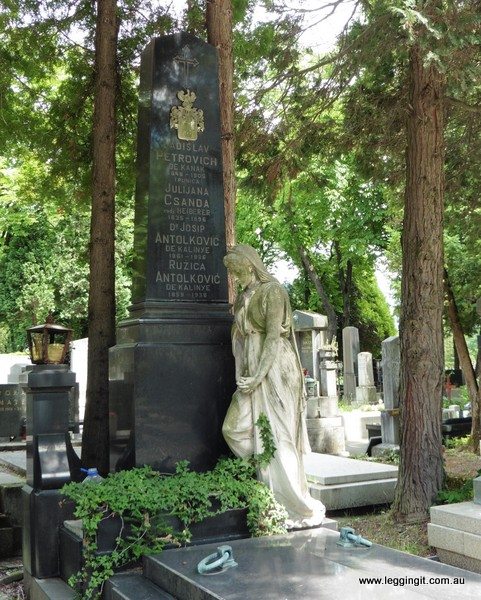 5 Jun 2016 Zagreb
So what did we do today? Well instead of the usual sightseeing we visited Zagreb’s Mirogoj cemetery. It seems a bit creepy but cemeteries can be so interesting. There’s a bus stop just near the cathedral which goes to Zagreb’s Mirogoj cemetery. It’s no ordinary bus stop for it is surrounded by stalls selling all the necessary items for the cemetery. There’s candles, lights, flowers, plants and all sorts of things for sale. It was interesting just watching people shopping whilst waiting for the bus.
As the 106 bus arrived a line of old ladies slowly climbed onto it with their bags of grave goods. The journey took us through the rich suburb which surrounds the church hill, past many luxurious houses on its way to the hills above Zagreb. 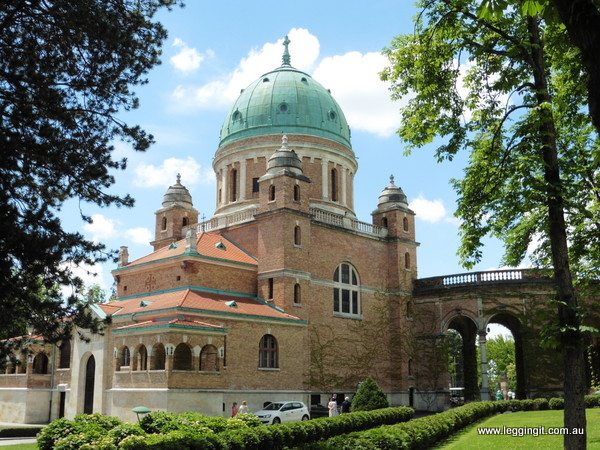 The cemetery covers a few kilometres from the top of a ridge down into a tree lined valley. A church, and formal domed galleries dating from the late 1800’s forms the main entrance. The bus passed along the boundary wall on its way to the last stop, the crematorium. Every now and then an old lady would press the stop button before shuffling out of the door.
Starting from the crematorium we worked our way back towards the main gate. It was quite interesting that the eternal flame was situated at the rear of the cemetery.

As we walked through the cemetery it was interesting comparing the changes in monumental designs through the years. We even discovered a few local celebrities.

Tomb of the People’s Heroes 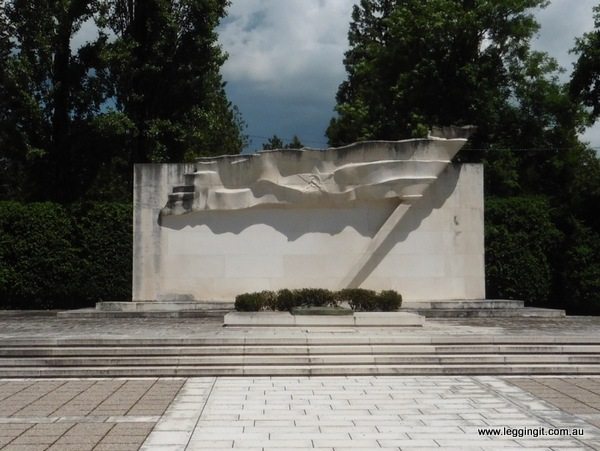 Not far from the main gate we found the Tomb of The People’s Heroes. It’s a communist era monument which contains the bodies of recipients of the Order of People’s Hero. There’s also some other Croatian and Yugoslav activists of the workers movement. The monument looks pretty forlorn, much like all of the communist era monuments throughout the countries of former Yugoslavia. In 2010 the monument was attacked with an explosive device by an unknown group. However, judging by people’s attitude anything attached with the communist times is ignored.

Monument To The Missing 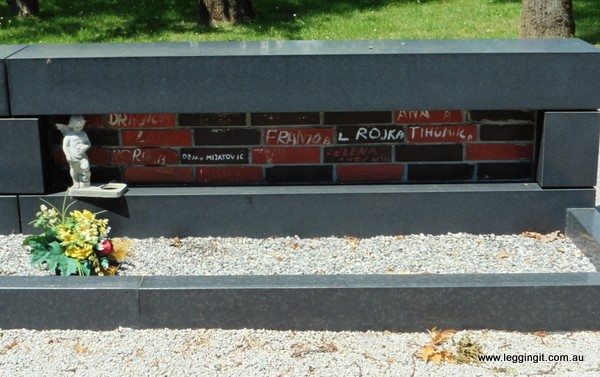 In contrast the nearby Monument To The Missing is still in the hearts and minds of locals. For us it really struck a cord. In 1993 it started as a simple statement, a brick with a missing persons name written on it. The brick was left outside the UN compound. Families desperate to find any information of missing loved ones were met with a brick wall by an indifferent UN command so the bricks were symbolic. Soon a wall filled with bricks stretched down the street and around the corner. It represented all of the soldiers and civilians who had disappeared during the Croatian War of Independence. 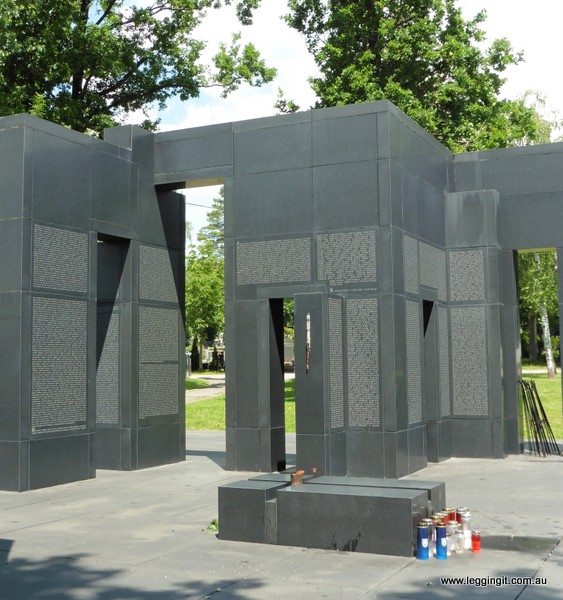 When the monument was built at Mirogoj some of the bricks were retained in a small glass section. Around them walls of black marble record the names of the missing. It’s pretty sobering seeing the thousands of names of mostly young people who disappeared without trace during the war. 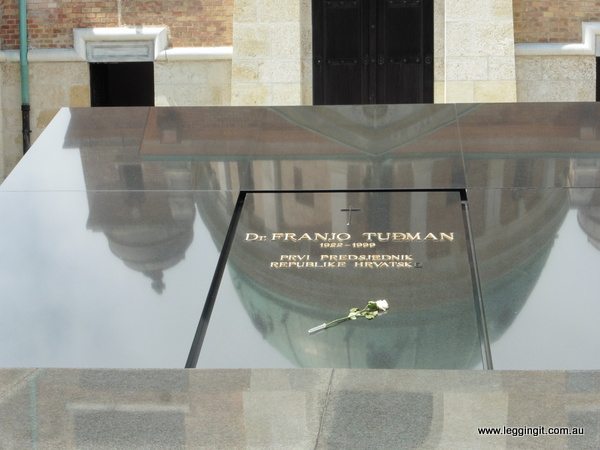 One of the principle figures of the Croatian War of Independence, Franjo Tuđman is buried behind the chapel beneath a huge black marble slab. A stain on the vast expanse of black marble tells us the first president of Republic of Croatia mustn’t have been loved by all.

The chapel sits behind the domes 19th century gates with galleries stretching out on either side. They contain the family crypts of the city’s wealthiest from that era. Sculptured marble statues and elaborate monuments to the dear departed fill the gallery wings. It was interesting comparing the different styles of monuments from the different eras.

Catching the bus back to the city was quite easy as there’s a bus every 20 minutes. The bus delivered us back to the cathedral just in time for their cultural show. 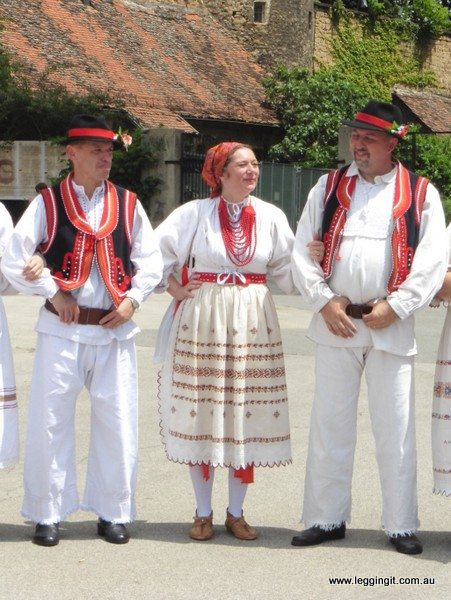 In the cathedral’s square a Croatian cultural group, dressed in regional costume were performing songs and singing. Afterwards they distributed homemade cakes and sweets among the crowd. It was a lovely surprise. As the women and men were from different villages and regions they all wore slightly different costumes.
The Militia that we’d spotted yesterday in the old part of the city were also back, and also parading in front of the cathedral. It really gave the city something a little different.

With our Zagreb map we decided to check out the ring of Austro-Hungarian buildings which ring the city between the old town and train station. In the war years and until recently many of the old 19th century buildings have been in a state of decay. As Zagreb has re-established itself the buildings have come back to life in all their glory. The gardens which surround them provide a much needed break from the concrete jungle. At the Botanic Gardens not far from the main train station we were able to get away from the crowds of people. It may not be the biggest or most beautiful gardens but it was the perfect place to stop for lunch.
The rest of the day was spent exploring the many sights of Zagreb before heading home foot sore and exhausted. Once again Annie, our couch-surfing host regaled us until late with stories of her seventy years of adventures. It’ll be hard leaving tomorrow and heading to Slovenia as we’ve had such a good time.

How to get to Zagreb Mirogoj Cemetery

The 106 bus leaves from outside the Cathedral, you can;t miss the stop as there are stalls selling candles etc surrounding it. If you want to see the older part of the cemetery the first stop where you see the domed chapel is the best stop to get off at.