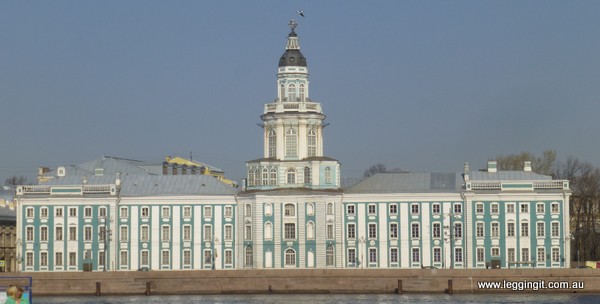 Today we started with exploring the St Petersburg Museums and ended with some jazz…
Out the door of the hostel and on the Metro to Admiralskaya arriving at the wharf at 1030 ready for the day trip to Peterhof Palace when we were told the next ferry is in June…….although this was not mentioned on their website.

Well somewhat deflated we looked at our options, two hours by train and bus or hire a car which would take the same time. Eventually we decided we’d visit the Hermitage Museum instead. The square in front of the Winter Palace had been invaded by the Russian Army Band. There were hundreds of them dressed in Greatcoats with drums, trumpets and all sorts of horns. There’s no height restrictions in the Russian Army Band and some of them looked like they should still be at school. The conductor was out the front standing on a Dias with a megaphone firmly clasped in one hand. When the band didn’t get it right he’d stop them raise the megaphone to his lips and after a quick blast they’d start again. Later when we passed them they’d moved onto marching and the same procedure was being played out. They must’ve been getting ready for the Veterans Day parade.

We used the Hermitage automatic ticket machines with each ticket costing 300 roubles and a further 200 to use the camera. (Which we stupidly paid for) The palace itself is a stunning building, internally there is so much ornate plasterwork and gilding that if it contained not a stick of furniture or art piece we’d still be wandering around open mouthed. Rooms covered in deep red velvet and gilding and one room completely gilded whoa so beautiful. Before entering the Hermitage a few days ago we’d gone through the Lonely Planet and marked the areas which we most wanted to see. After we headed through the turnstile we headed straight for the second floor and tapestries. There’s a major collection with all sorts of scenes even some showing scenes from different countries. Australia had scenes with natives with feathers in their hair carrying bows and arrows which did not look much like indigenous Australians at all.

There were all sorts of fine furniture, some from different periods of Russian history showing different trends. There was the famous hanging gardens of Catherine the Great, and the golden peacock clock. The art section was big on our list with paintings by Rembrandt, Rubins, Delacroix,Monet, Matisse, Van Gough, Renoir, Picasso, to name a few. They were spread between the second and third floor. There were heaps of sections French, British, Russian, Spanish and Italian from different periods.

Art is in the eye of the beholder and some of the famous masters we wouldn’t trust to paint a fence, but I’m sure some people love it for some reason. Unlike the Louvre in Paris, the art collection in the Hermitage wasn’t overcrowded so viewing pieces was quite easy. For me the Louvre has better art but The Hermitage kicks the Louvre’s butt because it’s not so crowded with people who have to have a shot of “a masterpiece” and the displays are well presented and not overcrowded with so many pieces that it is impossible to enjoy the art.

There was not only paintings but sculptures with some really exquisite stone work, china, silverware and gold ware. Some of the finest works of highly skilled artisans. On the third floor apart from the famous painters were collections of Asian art and artefacts, Buddhist pieces spanning centuries from China, Mongolia and Tibet. Chinese, Indian, Indonesian and Japanese art pieces. After exploring every nook and cranny of the upper two floors we headed back down to the first floor where there were artefacts from early civilisations. We had a look around the Egyptian section and decided to call it quits. I’m not a fan of looking at dead bodies even if they are mummies and by that stage I was having a brain information overload.

We caught the metro from Admiralskaya to Vladimirskaya and walked the short distance back to the hostel. The hostel is in a great location close to a number of stations. After a snack we caught the metro to Cherneshevskaya where we met up with our first Couchsurfing host. She’d acquired two tickets to the JFC jazz club situated nearby. The JFC is situated in a basement of a building tucked away inside a courtyard. It’s weird how things are tucked away off the street.

She escorted us there and we caught up on the last few days since we saw her last. Just before the band came on we bid her goodbye and she departed, asking us to text her what we thought of the band. It was such a pleasure meeting her and hopefully we will all catch up again one day.

The Alexey Popov band came on and started the warm up piece before Lera Gehner made a grand entrance. The band consisted of a lead guitar, bass, drums, keyboard Alexey on sax and Lera singing. The band were dressed like they were just hanging around home in T-shirts and jeans. Lera came out in boots with layers of rawhide fringes (like a 1920’s dress), black leather pants, and a white tunic tied at the waist and of course jazz sunglasses. Straight away it was evident we were in for a great night. She had a smokey almost Grace Jones or Eartha Kitt voice at times purring and other times roaring. It was sexy, it was savage, it was pure energy. She had a three microphone setup with one pa, one set on echo, another on distortion. She was her own backup singers. The band was really sharp with Alexey almost blowing the reed out his sax at every opportunity. With the funky rhythms they were pumping out and Lena’s energy there was no choice but to feel good and go with it. They played two sets in English with a mixture of fast paced songs with screaming sax and guitar solos, and slower ones with sax and guitar thrown in for good measure. All the band got a chance to strut their stuff and the crowd really enjoyed it and were up dancing, cheering, clapping, whistling and hollering. For a club with a max capacity of about 50 everyone was going nuts. It was interesting because they’d sing a song in English and then speak in Russian. All too soon they played their finale and the show was over. Michele thanked Lena for a great show but forbade me from buying any cd’s so I will have to download some songs at the next opportunity.

It was a nice walk home from the club through the streets of St Petersburg. We passed a few Metros but as it was a beautiful night out we decided to walk and it wasn’t really far. Tomorrow we catch the train to Belarus.